20 years already? Learn the story behind the most beloved of beverages, Starbucks Peppermint Mocha

When does it officially feel like the holidays? For some it could be hearing the first notes of holiday music or seeing that first flurry of snow. But for the last two decades, the arrival of the holidays can be marked by that first taste of Starbucks Peppermint Mocha and its rich, full-bodied espresso mingled with the flavor of chocolate, peppermint and whipped cream.

Starbucks Peppermint Mocha may be one of the most-loved of holiday beverages, but it wasn’t actually the first. Christmas Blend coffee made its debut in 1984, hand-scooped and packaged in brown kraft paper coffee bags to be brewed at home. Then came the first handcrafted holiday beverage in 1986, created behind the espresso bar at Il Giornale (which merged with Starbucks in 1987) by Dave Olsen, who steamed up a pitcher of eggnog and milk to make the first Eggnog Latte.

Ten years later, the first red Starbucks cup made its appearance and, as the company expanded into Europe, Asia and the Middle East, Starbucks created its first beverage research and development team.

“Customers’ understanding of espresso and lattes was really in its infancy,” said Peter Dukes, who joined Starbucks as a product manager for espresso beverages in 2001. “I think [a holiday beverage] was a good introduction for a lot of people back then to lattes and espresso.”

After successfully launching Gingerbread Latte (now available in Canada and select international markets) in 2000, the R&D team was tasked with exploring ideas for the next holiday beverage. Dukes remembers being invited to the R&D team’s Liquid Lab to be part of a team of about 10 partners who tasted new beverage concepts. The group was truly cross-functional – including partners from operations, finance, supply chain.

The team tried a few different flavors that would resonate with customers during the holiday, including an idea for a white chocolate cranberry beverage. But they quickly landed on a peppermint-flavored twist on the classic Caffè Mocha inspired by the flavors of traditional holiday candies. From there, the team refined the recipe, finding the perfect combination of rich Starbucks espresso with bittersweet mocha sauce, peppermint syrup, and steamed milk, topped with whipped cream and a sprinkle of red sugar sprinkles.

The beverage was introduced to Starbucks customers for the 2002 holiday season, and quickly became the most popular holiday beverage in Starbucks history. It’s still among the most loved holiday beverage on the menu today and is available hot, iced and blended. Its recipe has changed only a little; it’s now made with 2 percent milk as the standard and with dark chocolate curls on top instead of red sprinkles.

“To know you're part of something that turned out to be pretty special years later is unique. It takes me back to those times in the Liquid Lab with an extremely diverse group of partners sitting around a table tasting different variations of the peppermint mocha,” Dukes said. “None of us were professionally trained, but we ended up with a beverage that continues to resonate with our customers today and we had a lot of fun making it.” 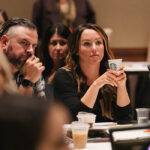