For some, it’s a way to pay for a wedding, make a down payment on a home or a car, or get through an emergency. But for everyone who works for Starbucks, it’s also what makes them a partner in the company: Bean Stock, an annual allotment of the company’s stock given to all benefits-eligible employees.

Bean Stock began in 1991. On the same day Starbucks opened its 100th store, Howard Schultz stood at the company’s roasting plant in Seattle and announced that all Starbucks employees would receive company stock.

“When we introduced Bean Stock... a first for the retail industry, we began to call ourselves partners, sharing in the company’s success,” wrote Schultz, Starbucks interim chief executive officer, in a letter to partners on Monday.

The landmark Bean Stock program was the first of its kind in the retail industry. This year, more than 230,000 partners in 21 markets will receive Bean Stock, including Austria, Great Britain, Italy, Switzerland, Japan, China, Canada and the United States.

“It is my hope that this reality of partnership deepens our sense of pride, of mutual support and of shared vision for Starbucks,” Schultz told the company’s 1,300 partners back in in 1991, during his first stint as ceo. “No matter where you are in the company – the roasting plant, the stores, the office – every person will have a stake in the success of the company.”

Read on for stories of how Starbucks partners have used Bean Stock over the years:

The dream of climbing Mount Kilimanjaro in Tanzania first took hold of Karen Capaldi when she was a college student in the 1980s. At the University of Colorado in Boulder, one of her professors used the receding glaciers on Kilimanjaro – the highest free-standing mountain above sea level in the world – as an example of the effects of global warming on the planet.

Fast forward almost 30 years. Capaldi had been a Starbucks store manager in Denver for about eight years, and learned that partners who’ve been with the company for 10 years are eligible for a sabbatical, called a Coffee Break.

“I ventured out, took six months off, cashed in my Bean Stock, took a small loan off my 401K and pursued my dream,” Capaldi says. “(In 2012) I summited Kilimanjaro with five other women. I got to stand on top of Kilimanjaro, on a glacier. It was the most amazing experience of my life. It totally changed my life and made me who I am today.”

The experience is still vivid, she says: the intensity of the sun at the 19,000-foot-plus-high peak; watching her breath at -28 degrees Fahrenheit immediately turn into ice crystals; the tunnels in the glaciers formed by pockets of hot air shooting out of the mountain.

“I got to stand on top of Kilimanjaro, on a glacier. It was the most amazing experience of my life.”—Karen 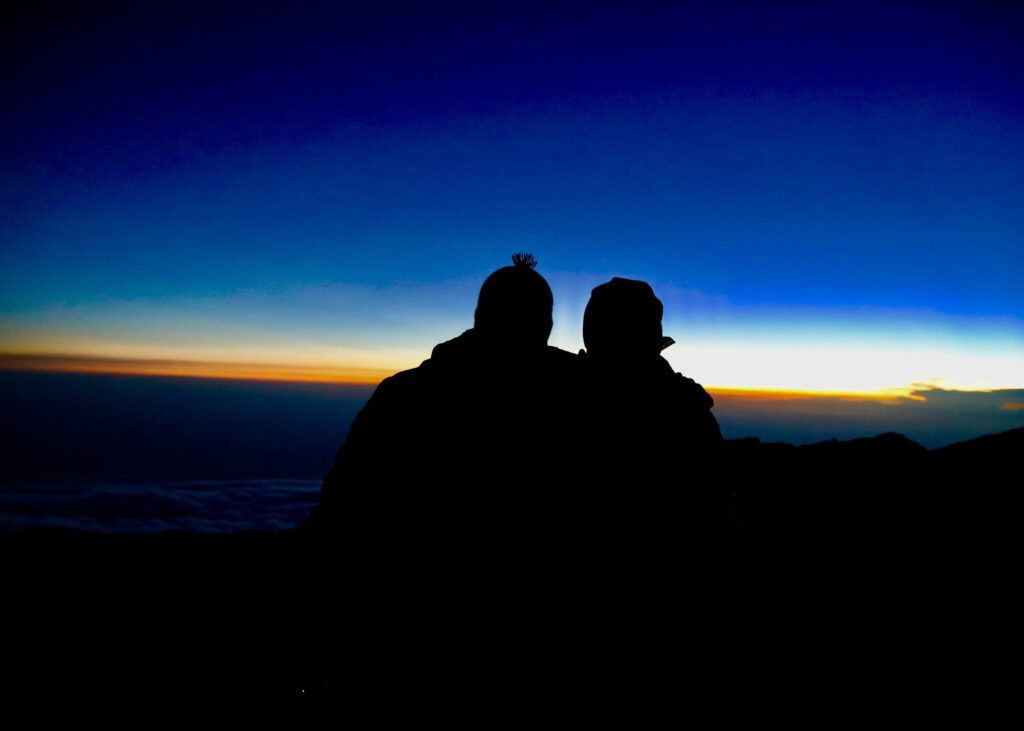 During that sabbatical, Capaldi also traveled around the world, did volunteer work in Rwanda and started The DreamMaker Project, through which she began interviewing people she met, including Starbucks partners, about their dreams. After her trip, Capaldi joined the Board of Directors for the Kilimanjaro Porters Assistance Project, in honor of the porters who helped her reach the peak. She’s now a store manager in Durango, Colorado.

“It wasn’t a trip, it was the biggest investment in me,” Capaldi says. “I knew it was going to change me, and it did, summiting Kilimanjaro and feeling immense pride in doing that. But when you have to do that type of deep thinking, have that deep resolve, it changes who you are, not only how you interact with the world, but how I interact with people, my family, friends, all of that.

“You get one shot at living your life, and I want it to be the most on-purpose and deliberate thing I do. It was the biggest investment I’ve made in my life, with the largest return. It showed me truly who I am on a physical, spiritual, emotional, intellectual level.”

In 2008, Whitney Hoiberg was pregnant with her first child. The plan was to go on maternity leave from her job at Starbucks and get through the next year relying on her husband’s income. But then his work as a stone mason almost completely dried up.

“I don’t think we really thought about the finances very much,” Hoiberg remembers. “When you go from being a young couple doing just fine because there’s no major expenses, and all of a sudden, you have a child… It was scary, how quickly our bank account was disappearing.

“But I had the stock. It was there, it was money we could access. It made a huge difference in paying our rent and keeping our electricity on. It was a big deal.”

The Bean Stock kept her family afloat for almost a year, until she returned to Starbucks and her husband’s work picked up again.

“But I had the stock. It was there, it was money we could access. It made a huge difference in paying our rent and keeping our electricity on. It was a big deal.”—Whitney 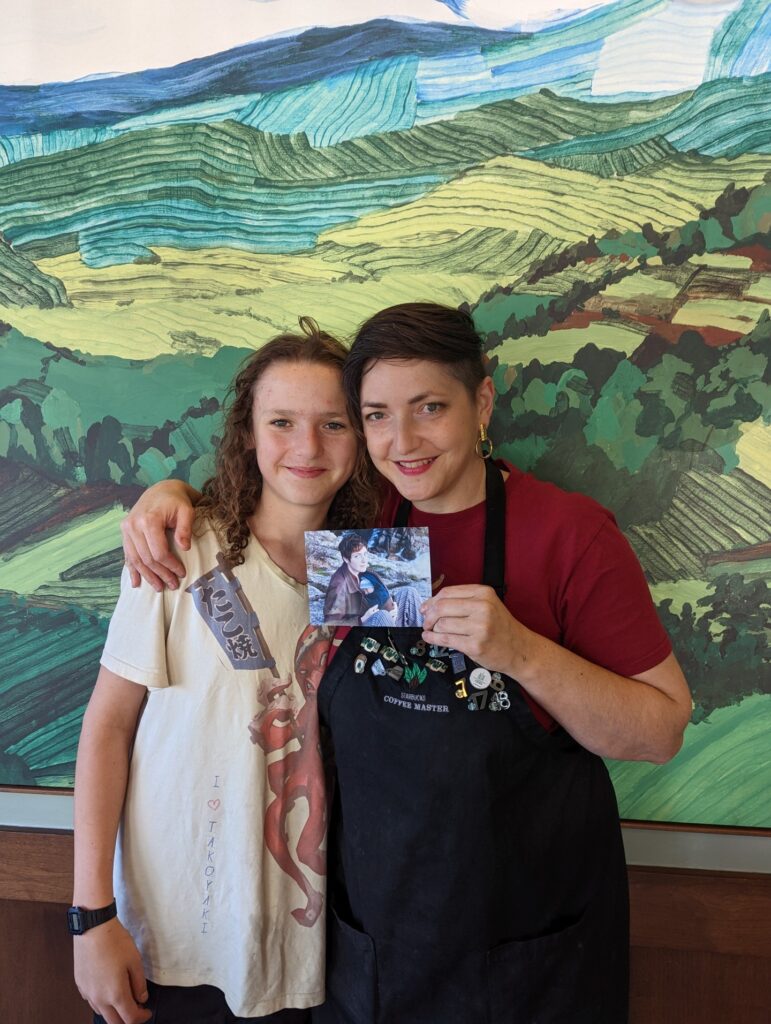 Hoiberg, 42, has been at Starbucks for almost 18 years, starting as a barista and moving up to store manager. She became a shift supervisor so she’d have more time to raise her two children.

“When I first started the job at Starbucks, I thought it would be a summer job,” Hoiberg says. “But being part-time and still having full benefits, it was like, ‘That exists? Give me every benefit I can have.’ I fully leaned into anything I could find.

“You have to look at the whole package: the health benefits, the discounts, the (food and beverage benefits), the Bean Stock. Add up all those dollar values, this has to be one of the highest paid part-time jobs you can get. Bean Stock is a great place to have money come when you need it. You can save up for when you need something or those rainy days that you don’t know are coming.”

Bria Smith, 24, started working at Starbucks when she was 16 years old. When she turned 18, her future mother-in-law, a Starbucks store manager in the Seattle area, helped her start a 401k retirement account and learn about Bean Stock.

“I was intrigued that Bean Stock was even an option for me,” Smith says. “Being that young, it made me think about the future… I’d read articles about people not starting their 401ks til their 30s or 40s, so it was cool to feel like I was ahead of the game, and it gave me confidence that I was setting myself up for success.”

In March 2021, she and her husband moved to Arizona to be closer to family. With real estate prices increasing, they decided to buy. They used Bean Stock, plus part of their retirement account and their savings to put a down payment on a two-story condominium in Scottsdale.

“Obviously, you start out small like I did, but it does build into something impactful,” Smith says. “It’s not always about the paycheck you’re going to get every two weeks.”

“I was intrigued that Bean Stock was even an option for me. Being that young, it made me think about the future.” —Bria 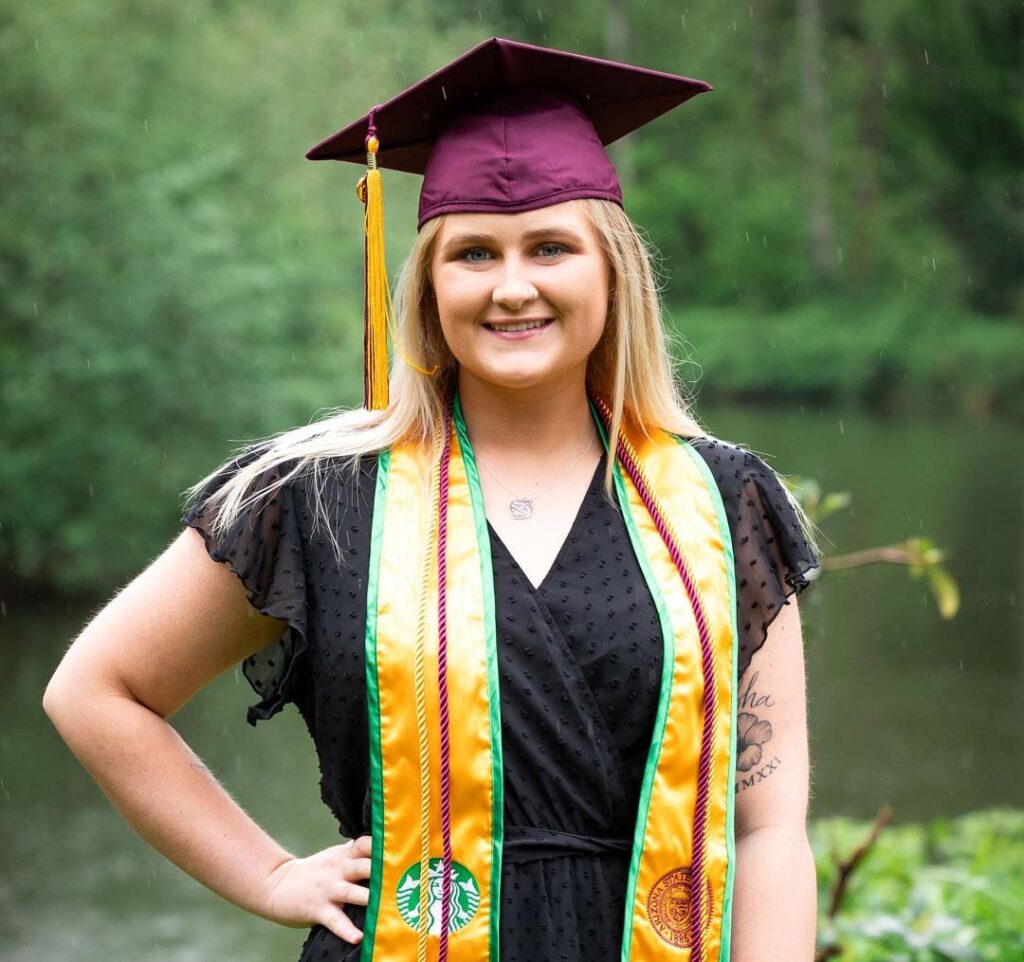 Bean Stock isn’t the only benefit Smith has taken advantage of. In May, she earned a psychology degree through the Starbucks College Achievement Plan, which provides benefit-eligible partners (employees) with 100 percent tuition coverage at Arizona State University’s online program. She wants to become a marriage and family therapist.

“I think one of the best things about Starbucks is the growth aspect,” Smith says. “Starbucks has helped me grow into a better person. It’s shaped me from being a very insecure, shy person to being able to have conversations with anyone. I think that is such an incredible skill to have.”

In 2014, about a year after immigrating to Canada from the Philippines, Marianne Wilson’s husband got sick and died.

“Starbucks took care of me during the biggest crisis of my life,” says Wilson, who by then was working as a Starbucks store manager. “I was left to carry on the dreams we had for our boys. I would not have done it successfully if I did not have Starbucks, and my leaders, to lean on. They carried me through those hard times.”

For Wilson, 48, Bean Stock is her family’s travel fund. She used it to buy a vintage travel trailer – named “Onwards” – for some memorable road trips. She’s taken her kids to Disneyland. And this winter, she’s returning to Southeast Asia for a month to celebrate her parents’ Golden (50th) anniversary.

“I know some partners are saving Bean Stock for retirement,” Wilson says, “but I live and enjoy life right here, right now, especially after losing my first husband.”

She’s since remarried “to a wonderful man named Kevin, who I met through Starbucks. He was a regular customer. Even my second chance at love, I feel Starbucks has provided for me.”

“I know some partners are saving Bean Stock for retirement, but I live and enjoy life right here, right now…”—Marianne 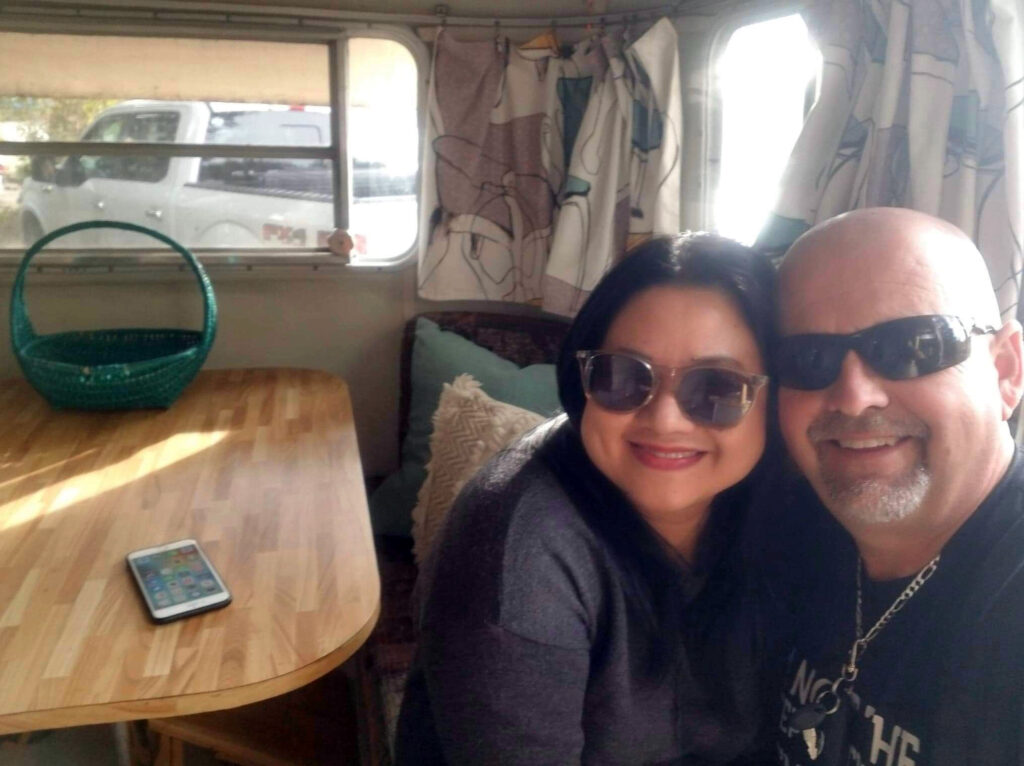 Wilson, who had 20 years of experience in the restaurant industry in the Philippines, was drawn to Starbucks because of the mission – to inspire and nurture the human spirit.

“I’m a partner first because of that,” Wilson says. “On my left arm, I have a tattoo that says, ‘gugma ug kahajag’ which means ‘love and light’ in my dialect. That’s my life mission, and that’s what our Starbucks mission also means – to nurture and inspire is to be love and light.

“I am so proud of Starbucks, and I have always been proud to be part of our relevance to human experience. During the lockdown, the biggest challenge of our generation – and the crucial litmus test of so many businesses and individuals – I saw firsthand how we comforted the community, and provided normalcy, stability and support.”

About six months ago, Benjamin Jackson’s landlord told him the price of his rental would go up – “an enormous amount.” Luckily, he was ready. He’d been saving his Bean Stock for this very moment.

He cashed out his stock, enough to help put a down payment on a mid-century split-level home at the base of the Blue Ridge Mountains, with three bedrooms, a large brick fireplace in the living room and a covered porch. 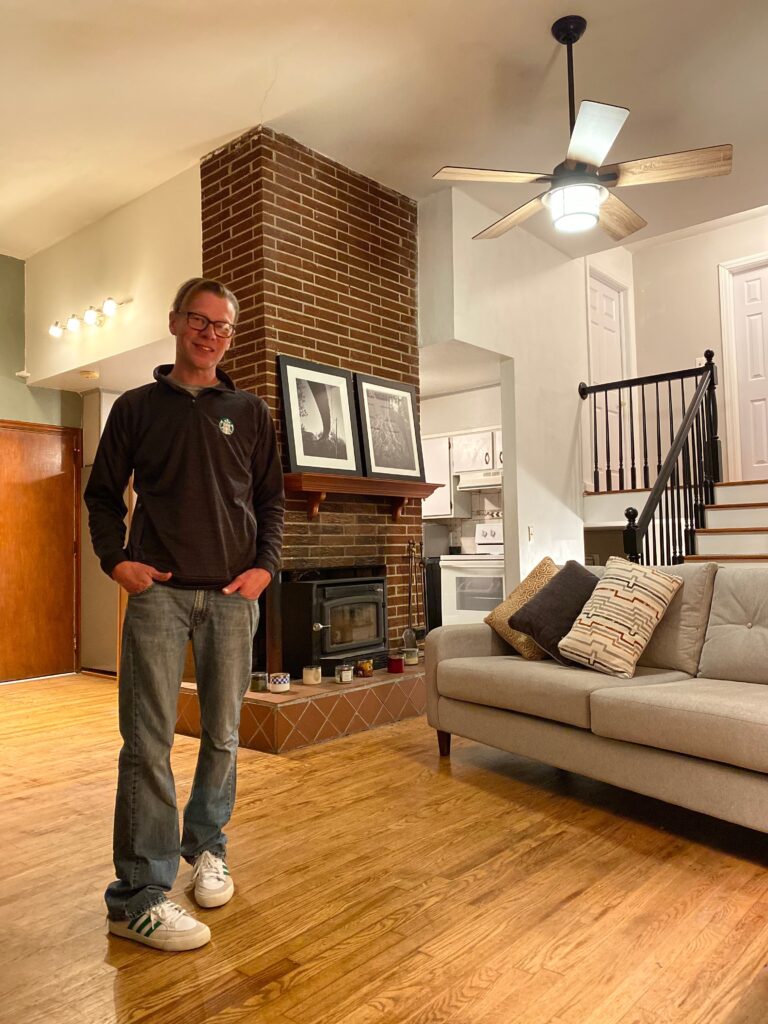 “I’m not going to lie, it was stressful,” Jackson says. “If one piece had been missing, it wouldn’t have been possible – my personal savings, Bean Stock, all that collectively. The preparation met the opportunity; it was the perfect timing.”

Jackson, 46, was a theater actor and playwright. One of his shows, “Steeple People: A Southern Gospel Comedy,” is still being produced across the country. He started working at Starbucks nine years ago for the benefits. He’s grateful for the career progression and a deepening of his understanding of partnership.

“Starbucks is more than a job,” Jackson says. “We have a financial stake in the company. Not only a responsibility for its success, but we reap the benefits of that success. So, when we talk about shareholder value, we’re talking about each other. 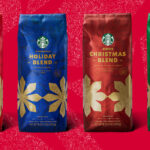