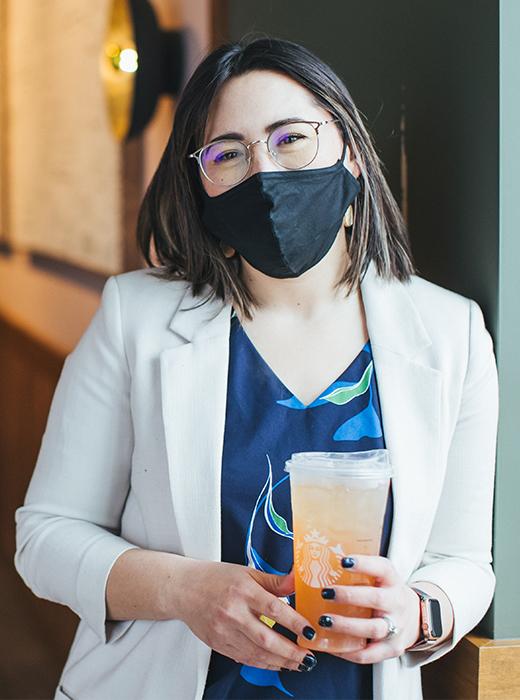 What does it mean to be “Asian enough?”

That was a question Gina often asked herself while growing up. Half-Korean and half-white, she spent most of her first 18 years in Korea, on a U.S. Army base and then in Seoul. She was immersed in the country’s culture and traditions, fluent in the language and surrounded by Korean friends and family.

But when she moved to the U.S. to attend college in a predominantly white, rural community, she found that some of her mannerisms stuck out. In Korea, for example, holding hands and linking arms with her female classmates was a way to signify friendship. But in the context of her new roommates, some of whom had never had an Asian friend before, that felt suddenly and completely foreign.

“I checked myself because I wanted to fit in,” remembers Gina, now a Starbucks district manager in Virginia. Meanwhile, “my Korean friends thought I was trying to become more American. It was a constant struggle where you can’t be both to their fullest extent.”

Gina, 33, began to find acceptance of her identity after meeting her husband, who was born in Korea, but had a completely different lived experience after being adopted by a Danish American family in the Midwest. He didn’t speak the language and wasn’t familiar at all with the customs.

“It was important for me to help him find his identity and be proud of being Korean,” she says. “Through that mutual discovery process, I was able to feel more comfortable in my own skin, that I can fully feel comfortable being an Asian as I would like to be, without having to make excuses or having validation.”

Now that they have children, “it’s very important and a part of my responsibility to help them be able to understand what part of their identity makes them unique, that makes them be able to have additional value out in society,” Gina says. “I want my kids to feel empowered. I want them to know that they can be fully and culturally how they choose” – whether it’s wearing a traditional hanbok to school or learning how to honor their halmoni, or grandmother.

About five years ago, Gina joined the Starbucks Women’s Impact Network (WIN), a partner (employee) resource group, where she found a community of strong women leaders. They helped her gain confidence and “be comfortable around uncomfortable topics.” She thought specifically about the many times she felt “invisible” during discussions about race, when some people assumed she was only championing Asian causes because of her husband and their children, or when others invalidated her views because they assumed she was white or not Asian enough to fully understand the struggles.

By then, she’d met many other Asian American peers, who like her, were working through identity issues too. So last October, she helped launch the Mid-Atlantic regional chapter of the Pan-Asian Partner Network (PPN), another partner resource group. They are now more than 100 members strong.

“My entire life, I’ve dealt with this idea of wanting to fit in, without having to check one box or the other,” Gina says. “I saw there was a part of my own personal community that wasn’t being represented and supported. It was just a moment for me to take every experience that I’d had, and do what I’d always wanted someone to do for me.”

The timing was especially meaningful. Amidst the recent rise in anti-Asian violence, PPN regional chapters have been holding listening sessions across the country this spring, so partners can find community and resources, and process and reflect on their experiences. More than 1,600 Starbucks partners have participated so far.

“For a long time, I felt like I shouldn’t be the one to launch the PPN chapter, because I’m not fully Asian, or I don’t represent the true Asian experience,” she says. “But I’m so glad for my experiences. At the end of the day, I push all that aside. I hope that people, in hearing my story, maybe feel inspired and speak up themselves, unapologetically be themselves, and not feel like they have to be an imposter in one aspect or another. I love that I can fully be me.”