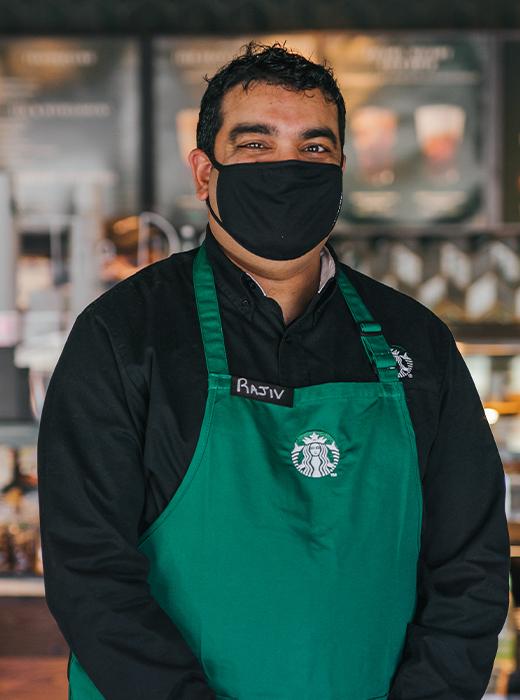 One day, when Rajiv was in kindergarten, he came home crying. He was the only student of Indian descent at his elementary school, and his classmates had been teasing him mercilessly about his name, mispronouncing it on purpose.

“I came home in tears and I asked my parents, ‘Can you just change my name, so I can have a normal name, so I can fit in?” he remembers. “That’s when my parents sat me down and explained that my name meant, in ancient Sanskrit, Blue Lotus.”

They told him how the lotus – India’s national flower – is rooted in the mud, but rises through it to blossom. They taught him about the flower’s deep religious connotations around purity, resurrection and enlightenment.

“It was a beautiful moment for me retrospectively,” says Rajiv, 37, a Starbucks store manager in Atlanta. “It was really fundamental to me understanding and embracing my identity.”

For Rajiv, who was born in Delaware to parents who’d immigrated to the U.S. from India, that moment sparked a lifelong journey to try and fully connect with his heritage, to try and discover who he really is.

The journey took him back to India during his college summers. He worked in a hospital in Lucknow doing research alongside his aunt, a psychologist. He walked in the footsteps of the pre-colonial maharajas who had once ruled the desert states near the Indo-Pakistani border. And he visited the same bustling neighborhoods and stores in Delhi where his parents lived and shopped.

“Those college experiences were fundamental in grounding me,” Rajiv says. “Traveling alone in India forced me to relearn the language, gain confidence in a drastically different culture and appreciate the shift that my parents underwent when they came to the U.S., knowing no one, and without any support.”

The journey continued after he got married, when he traveled to “the four different corners of India” with his wife – who is half-Japanese and half-white – so he could celebrate his heritage alongside her. And the journey lives on today, as he tries to capture and preserve the stories of his grandparents on video, so he can pass down a first-hand account to future generations.

“My Asian heritage is something that I have become closer to and embraced more and more as I’ve aged,” Rajiv says. “My own acceptance, my own understanding of my heritage has deepened.”

He still has family in India, including his elderly grandmother and an uncle who has cancer. He worries about them, along with all those in India who are currently facing a heartbreaking situation with overwhelming numbers of people with COVID-19 and dangerous variants. “To feel so powerless as the crisis magnifies in my homeland has been so distressing,” he says.

When Rajiv reflects on what he’s learned during his travels to India and the lessons from his life, he remembers how his mother nurtured her own community and, with dignity, “persevered in winning over the hearts of everyone she came in contact with.” She patiently explained Indian culture over a cup of chai to co-workers who were unfamiliar with it, and prepared family favorites like chickpea curry, lentil stew and spicy spaghetti whenever Rajiv’s friends came over for a study session.

Maybe her example of hospitality and respect for guests, he says, is one possible way to help confront the problems around race in America. It’s something he’s increasingly mindful of as he thinks both about how to interact with his customers (he’s been a Starbucks store manager since 2014), and how to take action amidst the recent uptick in reported attacks against Asians and Asian Americans, including the mass shootings of Asian women that happened in his city in March.

“We ourselves have to be comfortable enough to say, this is who we are. It’s so easy for people to shy away from who they are, to diminish their heritage in an effort to fit in, because it’s the path of least resistance,” Rajiv says. “You have to fundamentally understand yourself and your heritage and culture first, and then bring people along for the ride, who don’t have the exposure. That, coupled with seeing the pride that we have in our culture, will lead to greater acceptance.”