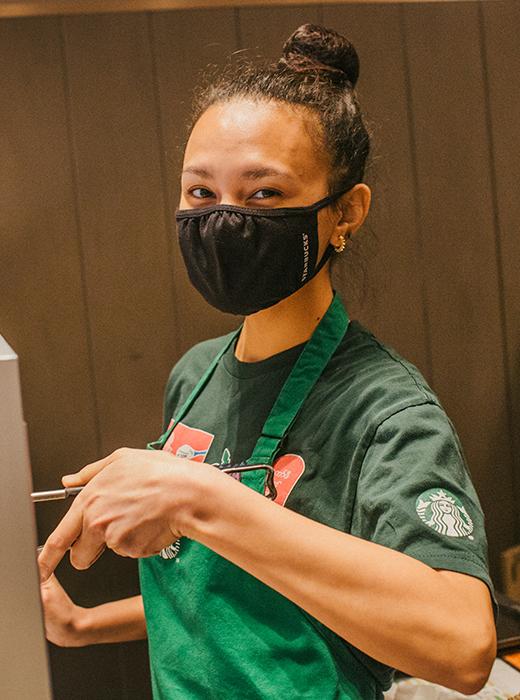 Whenever an elderly Asian customer comes into the New York City Starbucks where Sienna works as a barista, she makes extra sure that they feel seen and taken care of. She has three reasons, she says.

First, she wants them to feel safe in light of the increase in reported attacks against Asians and Asian Americans nationwide. Second, they remind her of her own beloved Filipino grandparents, who she grew up with in Hawaii. And third, she’s motivated by the invisibility she’s felt and experienced professionally as an early-career Filipino actor.

Born and raised in Honolulu, Sienna moved to New York City to attend college, study acting and try to break into Broadway and the film industry. But it hasn’t been easy, and not just because the pandemic has shut down many creative outlets.

“In terms of what actually gets produced in the mainstream, in your TV shows or films or Broadway shows, there aren’t a lot of Filipino stories out there,” says Sienna, 26. “A lot of Filipino actors I grew up watching portrayed characters not of Filipino background, but east Asian or even Latinx roles.

“I just feel like in that sense, Filipinos are not seen. What I would like to promote with my work is to push for actual Filipino representation and Filipino stories.”

Those stories are stories of home. Her parents are artists – her mother, a pianist, and her father, a painter who works as an architect – who encouraged her to act, play music and dance hula. They also told her vivid tales of their old neighborhood in Ilocos Norte, on the northwest tip of Luzon, the largest island in the Philippines – about the neighbor with the distinct cough or the Catholic church bell tower across the street that would toll so loudly.

Her two older sisters, who were born in the Philippines, told her different kinds of stories, scary ones from Filipino folklore, about giants who lived in the trees and shape-shifting women who chased little children.

Her grandparents made such a big impact on her, that in college, Sienna wrote a story of her own, trying to both honor her grandfather’s experience back in the Philippines and make sense of her own heritage that stems from it. She describes him biking miles and miles to work, fishing in a local river with his brothers and pursuing a master’s degree in education in Manila. It’s interspersed with a burst of scenes from her life in Hawaii – eating slow-cooked pork laulau with a scoop of rice, and sucking the cartilage off an oxtail soup bone – and her first encounter with New York – where the “air is crisp like an apple, and the wind sharp like the knife that slices it” and she has an awkward encounter with a bagel-shop employee who attempts to speak to her in Tagalog, which she doesn’t know.

She has adapted the story into a solo piece that she hopes to perform.

“I have so much respect for my family and their life histories. That is so rich and valuable,” Sienna says. “Why wouldn’t we have these stories represented in Hollywood or Broadway?”

Those stories also remind her to move through this world with care and intentionality, whether it’s being patient and kind to the many older Asian immigrants who live in her neighborhood and come into her store – for whom language, even when ordering coffee, can be a barrier – or processing the racial reckoning happening throughout the country.

“For the most part, it’s about moving through the world with huge compassion,” Sienna says. “Whenever anyone or any community comes forward sharing their experience, or asking for support in help in combatting racism, it’s important to listen with compassion and try to help each other move forward in whatever way we can, and to tap into our skills and our strengths and not be afraid to use that.”