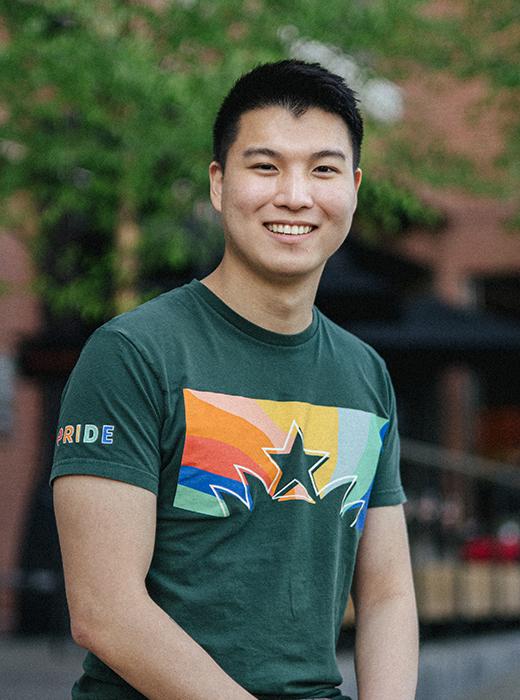 Growing up, Danny always felt out of place, both because he was an Asian in a predominantly white community and because his immigrant family had very strict perceptions of masculinity and what it meant to be the man of the house.

One place he’s been able to find a sense of belonging is the Starbucks Pride Network, a partner (employee) resource group celebrating its 25th year, with a mission to inspire and nurture the LGBTQ+ community.

Danny moved to Washington state as a young child and as a teenager, became a Starbucks barista. When he was 17, he befriended a co-worker, a Starbucks Pride Network member, who helped him feel safe and respected around his identity. The support gave him the courage to tell the rest of his store team he was gay, which in turn helped him come out to his family.

“I saw so many leaders (in the Starbucks Pride Network) who were not like the people I grew up with – people of color, trans people, people with disabilities,” says Danny, now a Starbucks social media strategist in Seattle. “I was seeing that and seeing the supporters of those people, and other people who understood the struggles of not knowing yourself, who could speak to being an outsider.”

Lately, friends within the Pride network have been helping him unpack and talk about his Asian identity, a process that intensified with the recent increase in hate crimes against the Asian community.

He remembers vividly a conversation he had with someone when he was working as a Starbucks shift supervisor, after moving to Philadelphia to attend college, who said that Asian Americans didn’t really understand prejudice and racism. It made Danny think about the model minority myth, which stereotypes Asian Americans as successful and privileged and diminishes their struggles.

“While it might not be intentional, I find that when I’m talking to some of my friends, peers, the struggles of Asian Americans are somewhat dismissed,” he says. “How can I and others better educate the people around us while also working through being told these things?”

He’s never verbalized these kinds of thoughts so purposefully before. “I’ve never really had a chance to find a connection with my cultural identity, never really connected with other Asian people, other Asian families,” he says.

As Danny leans more into his intersectional identities, he struggles with the tension he sometimes feels being gay and Asian, and how to best make sense of his relationship with his mother, especially in the context of her experiences growing up in Korea. She told him she saw openly gay people being publicly assaulted; sometimes, rocks were thrown at them.

He wonders how much that fear influenced her reaction when he came out, the summer before he left for college. When he told her, it didn’t go well, and their relationship was strained for years.

When he moved back to Seattle several years ago, he transitioned into his corporate job – and reconnected with his mother. He’s in a place where he can acknowledge her experiences, while trying simultaneously to explain to her who he really is. Sometimes, he says, “I see a light at the end of the tunnel.” Sometimes, he can’t forget how her reaction made him feel – numb and hurt.

“I just want to keep exposing her to more people who are gay. Some have families, some have amazing careers. They’re good people, they’re good to me, they’re good to her,” he says. “Has she ever seen any gay people treated well? Am I the first person who’s teaching her about any of this?

“Just because I’m gay doesn’t mean I can’t do all these things. My future isn’t limited because I’m gay. I’m proving to her that I can get a great job and be happy with my life. I want her to know that everything is still going to be OK.”

Celebrating PRIDE: Meet Andi (she/her) and Karen (she/her), for whom finding each other also meant finding themselves

Celebrating PRIDE: Meet Angel (she/her), who knows the power of ‘living out loud’