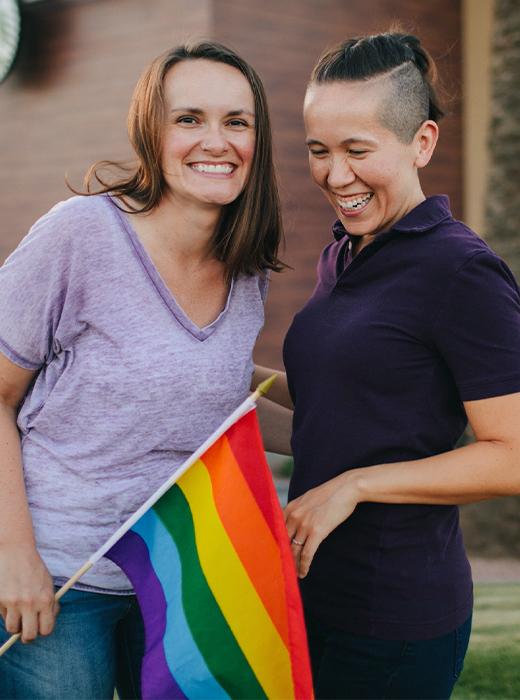 When Andi and Karen held hands and walked together in the 2016 Seattle Pride Parade, it was significant, and not just because it was Andi’s first march and they were coming out publicly as a couple in front of their friends and co-workers.

The moment led to a marriage, and also represented a milestone on the paths they’ve each been on to truly feel seen and understood – for Andi, finding the right words to describe who she truly is inside, and for Karen, finding pride in her identity.

“People want to feel heard and seen, they want to love who they love without judgment, and they want to live their true and authentic selves,” says Andi, a Starbucks supervisor on the partner data team. “Pride to me is the ability to break free from what I grew up with and have the family and life that I have always wanted.

“All of us are humans and it is a beautiful thing that everyone can be who they are to the core of their being, and to celebrate that.”

For Karen, a Starbucks global supply chain project manager, that march was her 20th. But while many of those events were fun, until then, “I’d never felt the same sense of pride – holding my girlfriend’s hand in a place where we would not be stared at or judged, and truly letting go and celebrating together.”

Pride month is a celebration of the LGBTQ+ community – social visibility and self-acceptance, advancements in legal rights such as same-sex marriage, a commemoration of the important 1969 Stonewall Riots in New York City. What better way to celebrate than with a love story?

Andi and Karen met at a Starbucks in Washington state and started dating about a year later. They both worked in the stores – Karen was a store manager at two different locations – before transitioning into corporate roles. They live in Arizona, having relocated recently in hopes the warmer weather will help with Andi’s fibromyalgia.

Their romance was a whirlwind. One spring night, they kissed on the dance floor of a Seattle neighborhood club, a moment they both describe as “fireworks.” That summer was the Pride parade. The next January, in 2017, they were married.

Since Andi was little, she’s known she likes girls. In middle school, she came out as bisexual because it felt safer, but a family member told her it was “just a phase” and that “you like boys.” As an adult, even after she started dating Karen, calling herself gay or lesbian didn’t fit what she felt inside.

“The fluidity of the human identity is a sliding scale and I now understand that the best descriptor for me is queer, knowing that inside I have both masculine and feminine feelings,” she says. “I don’t have to be confined to what society has defined as gay or lesbian, I can simply be who I am without the added pressure of gendered descriptors.

“I have people in my life that tell me they just don’t understand why they are expected to ask people what their pronouns are, or why people want to make their identities so complex by using words such as queer. But the world isn’t binary – boy/girl, straight/gay, he/she. It is much more complex than that which is what makes our world such a beautiful place.”

Karen grew up attending religious school. She remembers going to her first Pride festival – alone – when she was 15 years old. She snuck out of the house without telling anyone because she hadn’t come out yet. When she did, her senior year of high school, it wasn’t on her terms; she was “outed” by someone else.

“By far one of the worst times of my life,” Karen remembers. “It felt incredibly lonely to have a number of close friends one day, to hardly any the next.”

A family member wanted her to go to conversion therapy. Teachers told her she needed counseling. She felt judged and fell into depression.

For Karen, kissing Andi “opened my eyes and got me thinking about what a happy, healthy relationship could be like… it was an epiphany.”

As their relationship grew, they found they were both motivated, driven and ambitious. They helped each other advance professionally and encouraged each other to finish school, which they both did recently through the Starbucks College Achievement Plan.

Their wedding took place in Nevada, a small ceremony officiated by their good friend Ben, a Starbucks store manager in Seattle. Afterwards, they all walked down the Strip, still dressed up. Dinner was atop the replica Eiffel Tower restaurant at the Paris Las Vegas, with a view of the famous fountain at the Bellagio. Karen had a delicious steak (she’s now a vegetarian), and Andi still thinks about the butter. They danced to “Say You Won’t Let Go” by James Arthur.

“Pride means being proud of who you are, no matter what,” Karen says. “There’s been a 100 percent shift in the right direction, in the last 10 years or so. I just feel like we’ve come so far as a society. It feels good to be celebrating and not be afraid.”

Celebrating PRIDE: Meet Angel (she/her), who knows the power of ‘living out loud’

Celebrating PRIDE: Meet Danny (he/him), whose Pride family is helping him lean into all his identities