In 2017, the city of Philadelphia created a new version of the rainbow Pride flag, adding black and brown stripes to symbolize the intersectionality of LGBTQ+ rights and racial equality movements. Starbucks raised the Philadelphia Pride flag above its Seattle Support Center today to commemorate Pride month and our reinvigorated national drive for racial equity.

Salicia Cunningham bought a large flag to carry with her as she marched in the recent “All Black Lives Matter” protest in West Hollywood.

The flag looks very much like a traditional rainbow Pride flag but with a black and brown stripe at the top. Cunningham said this flag – nicknamed the “Philadelphia Pride flag,” as that’s where it was created and first raised in 2017 – has become a powerful symbol in her life.

“It’s my flag! It’s my movement. It represents my hardships and my struggles,” said Cunningham, a six-year Starbucks partner who manages a store in Los Angeles.

Each year, Starbucks commemorates Pride month by raising a rainbow flag above its Seattle Support Center. This year, the company raised the Philadelphia Pride flag to mark the intersection of Pride month and a renewed movement for racial equity.

“This Pride month has been hard. I’ve been active with pride celebrations annually, but it’s always felt like just that – a celebration. Because of the racial injustice that has come to light, I’ve had to come to terms with some very serious issues that I was unaware of or have been desensitized to in the past. I’ve been hurting, and my family, my partners and my friends have expressed this as well,” said Cunningham, a member of the company’s Pride Alliance as well as its Black Partner Network. “But through all of this I realize I’m not alone, and the raising of this flag demonstrates that. I’ve always felt Starbucks is inclusive, but I’ve been blown away about the company’s ability to be there for its partners. I feel seen, heard, and valued.”

Cunningham and her wife of 11 years (Shay, also a Starbucks partner) have two young children. Her younger son, 5, doesn’t understand much of what’s happened this month, but her older son, 7, has lots of questions.

“He’s seen the protests, the fear and the sadness,” Cunningham said. “I’ve told him we will not be bystanders. That acts of kindness will go a long way. That he can be a part of the change that our world needs. It’s a heavy load for a 7-year-old, but I know he will take my words and apply them. I only hope other families are having the same conversations.”

Sharif Kelly, a Starbucks store manager in the Atlanta area, was thrilled to see the Philadelphia flag raised. As a Black man who is married to a Black man, he, too, sees himself in the flag. It also reminds him of a couple of important things, he said. First, that even within the progressive LGBTQ+ community, there can be a racial and equality gap, and the flag is a way “to bring us closer together.” And second, that the history of the LGBTQ+ rights movement is full of powerful moments in which Black people led the charge for equality – people like Marsha P. Johnson at the Stonewall Riots.

“Even with all this change there is still more work to do, especially protecting our Black trans friends and family members, as they are being killed at an alarming rate as well,” said Kelly. “Starbucks has always and will always be a leader of being inclusive. In the last few weeks, our leaders have shown up for the partners and the community with Black Lives Matter shirts and releasing statements that uphold our mission and values. We’ve had difficult conversations to move the needle in the right direction, making Juneteenth a paid holiday, and now raising the Philadelphia Pride Flag. I feel seen, heard, cared for and now invited into the room more than ever with the raising of this inclusive flag for Pride month.”

The original Pride flag was created by Gilbert Baker, an Army veteran and artist who moved to San Francisco in the early 70s just as the gay liberation movement was gaining speed in part thanks to figures such as Harvey Milk, the first openly gay elected official in California history. Baker, a flag maker, wanted the gay liberation movement to have a powerful emblem beyond the inverted pink triangles widely used at the time, a symbol Nazis used to mark gay prisoners in concentration camps and one later reclaimed by the LGBTQ+ community. Gilbert sewed a flag with a rainbow of eight stripes, each color symbolizing a different meaning, that debuted during the 1978 San Francisco Pride parade. The rainbow flag was a hit, and quickly became the banner of a global movement.

Fast forward to 2017 in Philadelphia. After a couple of widely reported instances of racism within the city’s “Gayborhood” left the community jarred, a woman named Amber Hikes – then the executive director of the city’s Office of LGBT Affairs – decided to develop a new version of the Pride flag, adding a black and brown stripe to the rainbow to address this tension and to promote unity. This new Pride flag was raised over Philadelphia City Hall during Pride month in 2017, and though it was not without controversy at the time, the flag continues to grow in popularity for the inclusivity and intersectionality it represents.

“To me, it meant the city was saying, ‘We are with you,’” said David Vaughn, Jr., a Starbucks store manager in the Philadelphia’s “Gayborhood.” “The fact that the city flies that flag shows tolerance, love, peace and respect for all. And now the flag is in Seattle! The work has just begun, but what is clear to see is that Starbucks is willing to do the work. I feel like Starbucks and Philly are both always ahead of the game when it comes to the LGBTQ community.”

Jean Hippensteel, a store manager at a Starbucks a block from Philadelphia City Hall, vividly remembers the moment the new flag was unveiled and raised above the city. It forced the Philadelphia LGBTQ+ community, which believed itself to be inclusive, to confront its own discrimination and biases around race, she said.

“It was a grand moment in Philadelphia’s gay pride story, and now it’s a proud moment in Starbucks Pride history,” said Hippensteel, who has been married to her wife, Eileen, for 24 years. “Gay rights would not be where they are without allyship. If people didn’t stand up for us, I would not be able to be married to my wife. It is my responsibility to be an ally for Black Lives Matter, and our Black partners, at this moment in time. For the LGBTQ community, this is our moment to be allies – our moment to give what others have given us for decades.  Let’s make sure we get it right.” 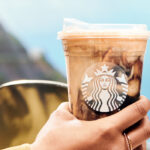