When Chanel DeCorte was in elementary school, she joined a hālau – a hula dancing school – in Oahu, where she grew up. The school became like a second family to DeCorte, giving her emotional support during difficult times while teaching her to express her Pacific Islander heritage in ways that went beyond words.

For more than 20 years, DeCorte has learned and danced the stories taught by WandaMae Pa’akea Akiu, her kumu – her teacher – stories about lovers and wars, stories about honey-eating birds and never-fading flowers, stories about the ancient places and ancient chiefs.

“When I’m dancing hula, I feel proud,” says DeCorte, 28, a Starbucks store manager in Kapolei, Hawaii. “Not only are you sharing a story about your culture and where you came from and your heritage, but you’re also sharing the knowledge and values that your own kumu has taught and instilled in you.

“I’m lucky enough to hear the stories firsthand from my kumu, and her kumu before her, and everyone else who came before them.”

This May, during Asian American and Pacific Islander (AAPI) Heritage Month, Starbucks is proud to stand together with our AAPI partners and communities. Starbucks honors their stories, their identities and their experiences – whether they’re immigrants or newly arrived, or their families and lives have been deeply rooted for generations. With this year’s heritage month coming during especially difficult times, we believe even more in celebrating families, neighborhoods and traditions. Even apart, we’re better together.

“In the 1800s, hula wasn’t allowed to be practiced in Hawaii; you couldn’t dance hula at all,” DeCorte says. “It’s the same way with culture. If it’s not practiced or perpetuated, eventually it’ll die.”

DeCorte was the eldest of three children raised by a single teenage mother. Her mother, Christine Valdez, took on multiple jobs at the same time – at car shops, restaurants, administrative work – to make ends meet and put her kids through private school. DeCorte often helped her two younger brothers with homework, dinners and pickups.

“It was really tough, we moved all around the island,” DeCorte remembers. “There were times where we had absolutely nothing and we were sitting on the floor, and there were other times when we were more fortunate. I always had a lot of support from my grandmother.”

When DeCorte started high school, her mother, who was interested in a career in education, started college. They graduated the same year and celebrated by parking a boat on a local sandbar and eating traditional Hawaiian foods with family – poi and lau lau, pork wrapped in taro leaves then steamed in the ground. The memory brings DeCorte to tears. Valdez, who went on to obtain a master’s degree as well, has been a high-school special-education math teacher for almost 10 years.

“It was super cool to get to share that moment with my mom,” DeCorte says. “To know that we’ve struggled together and to see her doing something for herself too, it was really special.”

DeCorte started dancing hula when she was 3 or 4 years old. It became serious once she joined Akiu’s school a few years later. The school provided structure, guidance and camaraderie. She started competing in local and international events, learned the deeper meanings of the songs and trained in different styles of dancing, like the more traditional kahiko and the more modern ‘auana.

Akiu was a “second mom” who “embodies the spirit of aloha,” DeCorte says.

“There’s a true sisterhood there,” DeCorte says about what her hula dancing school has meant. “You sweat, you cry, you make implements, you really grow up with these people. This is your family and you can’t just leave your family and go to another one.”

DeCorte sees hula not only as dance, but also as a responsibility – to preserve and share the story of Hawaii and carry on the lineage started by all the teachers before her.

People have only a “small glimpse” of Hawaiian heritage, DeCorte says. Her culture is about more than grass skirts and fruity drinks, palm trees and Pearl Harbor. She also wants people to know that native Hawaiians are fighting to keep construction off Mauna Kea – the tallest mountain in the world as measured from base to peak – and she encourages the study of Pacific Islander cultures like Palau, Samoa and Tahiti.

DeCorte, who has a degree in environmental studies, also aspires to be a voice for women in corporate settings, a vision she didn’t have when she started as a Starbucks barista in 2013.

“A lot of the things that I do, a lot of the family that I’m close with, and the things I practice are deeply rooted in Hawaii and what Hawaii stands for,” DeCorte says. “A culture of warmth and belonging where everyone is welcome.” 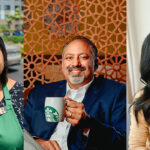