On June 19, Ain Powell will turn her thoughts to her mother and her grandmother.

Jeannette Jones, Powell’s mother, was a pillar in Seattle’s Black community, who worked in education for 47 years at the same middle school before she passed away in 2018. She mentored countless youth and became a foster parent to nine former students.

Rachel Suggs Pitts, Powell’s grandmother, was a nurse and early pioneer in infectious-disease surveillance, who worked to improve health outcomes for African Americans in Seattle’s Central District, once the city’s predominantly Black neighborhood. She recently celebrated her 99th birthday.

“I think of them and the greatness that they have shown and the importance they have shown in being confident, in being comfortable in your skin,” said Powell, a Starbucks supervisor in charge of corporate partner data and one of the founding members of the company’s Black Partner Network (BPN).

Leaning into her lineage feels especially important this year, as Powell celebrates Juneteenth – the holiday that commemorates the end of slavery in the United States – amid massive social unrest and demands across the country for change and justice.

On June 19, 1865, Union soldiers arrived in Galveston, Texas, and told enslaved African Americans that the Civil War had ended, and they were free. Two and a half years earlier,  President Abraham Lincoln had issued the Emancipation Proclamation, but until that day, a lack of Union troops in Texas made enforcing the order difficult. By then, some historians estimate as many as 250,000 people were enslaved throughout Texas. Many African Americans view June 19 as their Independence Day.

“What a time it is to know instead of having to squash these emotions that have been inside for so long, you’re able to voice your concerns and your voice will be heard. There’s a movement happening, there’s change in the air and it’s truly wonderful to be a part of it.”

Powell has been celebrating Juneteenth for as long as she can remember – memories of wearing red dresses, community barbecues, eating red foods and drinking red drinks. Red has become both a symbol of resilience and a link to food in times past: the red kola nuts and bissap (hibiscus tea) that came to the Americas from West Africa during the trans-Atlantic slave trade. The holiday has a rich food tradition.

This year, Powell will raise the first-ever Juneteenth flag to fly atop the Starbucks Support Center in Seattle, which marks another step in the company’s ongoing commitment to listen, learn and evolve. Starbucks announced this week that Juneteenth will be an annual paid company holiday.

After the flag raising, Powell will make red velvet cupcakes with her two young children and pass on the stories.

About 50 miles northwest of Galveston, Houston is home to Emancipation Park, which was created in 1872 when a group of African American ministers and businessmen purchased 10 acres of land with the intent of making it a permanent site for the city’s annual Juneteenth celebration. When the city of Houston segregated public parks in 1922, it was the only public park available to African Americans for the next two decades.

On Juneteenth this year, members of the BPN South Central chapter in Texas plan to visit the park to examine its deep-rooted history and share the park’s story with their Starbucks peers. It’s a story that’s not often taught in history books or in school, much to the frustration of Jok Gist, a Starbucks district manager in Houston and chairman of BPN South Central.

“I know those folks in 1865 had some rejoicing because they were free,” Gist said. “I am also sure there was so much deep-seated anger and frustration and pain. That’s what has been weighing on my mind, to try and emotionally connect to that. I think we owe it to those folks to share their story from that space because it shouldn’t just be words that come out of our mouths, it’s something deeply personal.”

For Gist, Juneteenth this year is both a painful reminder of his past and a reason for hope. Gist is one of five children of a single mother who immigrated from Antigua, a Caribbean island where many people are descended from Africans who were enslaved on the sugar plantations there.

He remembers growing up poor in Southern California, and the embarrassment when school administrators wondered aloud if he was in a gang, and the disbelief when another teacher told him, when he was in fifth grade, that he wouldn’t succeed in life.

But on this Juneteenth, Gist also sees momentum and opportunity: more genuine concern around equality, more chances to get unified with friends and allies, more chances for everyone to undertake “deeply personal journeys” of leadership, listening and empathy.

When the flag goes up at the SSC, “it’s an open symbol to the rest of the people in this country to say, this is what being equitable means, this is what true inclusivity means, this is what diversity means,” Gist said. “This is a pretty powerful moment for so many people who have been told that they’re not going to amount to anything, or that they don’t deserve basic rights as a human being.”

Hope for change, even amidst grief

White, with other members of BPN South Central, served refreshments to hundreds of mourners at his June 9 memorial service. She remembers the heaviness of seeing the families of Trayvon Martin, Eric Garner and Ahmaud Arbery grieving alongside Floyd’s family.

Yet in the midst of the that grief, for White, this year’s Juneteenth celebration also represents hope. Hope for the neighborhood she grew up in and the light that’s been shined on the issues there. Hope for the young people in her life, especially her two daughters and her seven nieces and nephews, who have experienced so much in the last few months, that they might grow up in a more just and safe world and be part of the next generation of leaders. And hope that her company is trying to do the right thing, even amidst so much uncertainty.

“With that flag going up on Friday, it feels good now to see that we have a huge platform and that people are listening and people are taking notice of the things that mean the most to us,” White said. “We want for people to listen, but not just to hear, but listen to understand —  listen to understand and we can stand together and move in the right direction.” 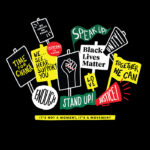