The delivery program, which initially launched as a pilot in partnership with Uber Eats in late 2018, is now available in a total of 16 major U.S. markets and will reach national availability in 2020. 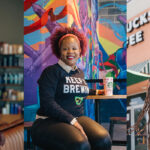