Starbucks stores are designed to reflect the neighborhoods they serve – from college campuses to sandy beaches. each store incorporates intentional design elements that are a tribute to the community and to the company’s commitment to pioneering green building around the world.

Now, there’s a one-of-a-kind Starbucks café tucked away in California’s Yosemite National Park, which attracts visitors from around the world. There is no sign on the store’s exterior, just the warm glow from floor-to-ceiling windows that beckon visitors like a campfire amongst the towering ponderosa pines and sequoias.

The café is part of the new Base Camp Eatery, a remodeled space that occupies the lodge’s old food court in one its original mid-century buildings. The project is a collaboration between the U.S. National Park Service and Aramark to create a comfortable place for visitors to recharge and relax. The location is the first Starbucks café within a U.S. national park, and the first retail location within Yosemite built to achieve LEED certification. LEED, or Leadership in Energy and Environmental Design, is the world’s most widely used green building rating system, developed by the U.S. Green Building Council (USGBC).

Starbucks has worked with the USGBC since 2001, and has worked to incorporate green building practices throughout its portfolio of new stores and remodels. Starbucks is the world’s largest green retailer, with more than 1,400 LEED-certified stores and facilities in 20 countries, including its company headquarters and Roastery in Seattle, and roasting facilities in Carson Valley, Nev.; Sandy Run, S.C.; and Augusta, Ga.

“Starbucks is a true leader in the green building movement,” said Mahesh Ramanujam, president and CEO, USGBC. “As one of the most successful and prolific users of LEED, Starbucks has helped to shape the way retail stores view and use the rating system. Embracing innovative approaches to store design and operation, Starbucks consistently demonstrates their commitment to a more sustainable future for all; a vision shared by USGBC. The opening of their newest store in Yosemite National Park and its LEED certification are exciting milestones in their journey to create spaces that further their legacy of leadership, community, and quality.”

To create the new store at Yosemite, designers preserved original qualities of the historic building, including its vaulted ceilings with exposed beams. The concrete floors were restored in a gray finish that evokes the rocky riverbed of the Merced River, which meanders nearby.

“We put a lot of thought into the design,” said Karina Lagace, a store designer from Starbucks design studio in Fountain Valley, Calif. “We wanted to be respectful to the park and added only what we needed to.”

They took other cues from the landscape. The bar is clad in reclaimed and rediscovered redwood from Northern California. Metal pendant lights from Los Angeles feature an exposed wood grain texture. Other details include metal brackets that are a nod to vintage climbing tools, while cables looped through the brackets help suspend shelves.

“Coffee is shared between familiar faces and strangers, and is the common thread that knits people together,” Lagace said. “We hope our store is a place of connection – to nature and to each other.” 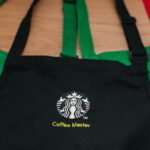