Last September, after Hurricane Maria tore through Puerto Rico, ripping down power lines and ripping up landscapes, leaving thousands without electricity, water or cell service for months, Starbucks’ Kelly Goodejohn couldn’t help but wonder: What happened to the coffee crop on the island?

Starbucks buys from just one farm in Puerto Rico, Hacienda San Pedro, the only one that currently meets the company’s rigorous quality standards for growing practices, sustainability and processing known as CAFÉ practices. After weeks trying to get in touch, Starbucks learned that the family that owns and operates the farm had survived, but their coffee fields had not. And they were hardly an exception. News was traveling slowly due to damaged phone towers, but it seemed undeniable that the island’s coffee industry —on track to be worth up to $100 million in 2017 — was in tatters.

Starbucks partners with World Coffee Research, a non-profit dedicated to increasing the supply of high-quality coffee around the world, which confirmed that the island’s coffee crop had suffered mass devastation. The situation seemed grim, but it also presented an opportunity. Even before Maria, Puerto Rico’s coffee industry was in need of some fine-tuning. Farmers had been planting a tree here, a tree there. Many of them didn’t stick to a regular pruning schedule. But they were interested in improving their farming practices and had begun to move in that direction after several years battling coffee leaf rust, a disease that has ravaged coffee crops in Central America.

Before Maria struck, Puerto Rico was looking forward to its best crop in years. After the devastation, farmers became even more invested in getting help to fortify their planting protocols. They knew they needed guidance and they needed healthy trees, as well as technical assistance to keep them healthy.

Goodejohn, director of Starbucks’ ethical sourcing program, thought Starbucks could be part of the solution. “What will it take to rebuild?” she started asking. “Could this be a model for disaster recovery?”

A ‘white canvas’: Hurricane Maria offers a chance to rebuild

To help answer that question, Goodejohn planned a trip for December to survey the devastation first-hand. As her plane descended, she saw a sea of blue rooftops, learning later that what she had thought was picturesque were actually plastic tarps distributed from the Federal Emergency Management Administration. Three months after the hurricane, many people still had no roofs.

Along with World Coffee Research, Goodejohn met with various stakeholders, including Puerto Rico’s secretary of agriculture, Carlos Flores Ortega, who told her he was a coffee farmer by trade. She also visited Roberto Atienza, Hacienda San Pedro’s proprietor. Led by Atienza, Goodejohn walked the perimeter of his uprooted fields, which were pocked with broken coffee trees — trunks split in half, roots cracked, entire trees bare of leaves and sprawled in the dirt. Atienza inspected tree after tree, pronouncing them doomed. “He was devastated,” Goodejohn recalled.

Did the fourth-generation farmer plan to stay in the coffee business? Goodejohn asked, fearing his answer. Of course, he replied. Unexpectedly, his face “seemed to brighten,” Goodejohn said, and he struck a note of optimism. “Maria gave us a white canvas,” he told Goodejohn, “a chance to build something better.”

As many as 4,600 people died as a result of Hurricane Maria — a Category 5 storm, the fiercest to ever strike the island — according to new estimates in The New England Journal of Medicine. Most died not as a direct result of Maria’s impact but due to delayed medical care in the aftermath of the typhoon.

As the 2018 hurricane season begins today, Puerto Rico is still in the thick of recovery. Houses need to be reconstructed, fields replanted. Coffee needs to be coaxed back, tree by tree.

In March, six months after Maria’s winds and rains had quieted, Goodejohn returned to Puerto Rico. In a hotel conference room still powered by a generator, she joined with various representatives from the coffee industry to hammer out a plan. There were government officials and experts from the University of Puerto Rico and World Coffee Research. There were members from the island’s farmers’ association and Puerto Rico Coffee Roasters, which owns the majority of Puerto Rico’s coffee brands and is Starbucks’ main competitor on the island. They unceremoniously dubbed themselves the “task force.”

Starbucks is a relative newcomer to the tradition-bound Puerto Rican coffee industry, having entered the market in 2002. “People thought we weren’t going to last more than six months,” said Virginia Rivera, marketing director for Starbucks Puerto Rico. But the company has gained trust by forging ties with local organizations and participating in grassroots initiatives in coffee-growing regions, tutoring schoolchildren and supporting community sports teams.

“We are working on this task force with our biggest competitor,” Rivera said. “When it comes to strengthening our coffee industry, we have to leave brands aside because the industry needs all of our hands and all of our help. To make sure that we have coffee for our future generations, we need to work together.”

During the spring task force meeting, several of the task force members went to visit nurseries. Others toured an experimental research farm at the University of Puerto Rico. And World Coffee Research engaged in science, collecting leaves from a selection of coffee trees for DNA testing. This so-called DNA “fingerprinting” involved grinding up the leaves, extracting DNA and then comparing the genetic analysis with a database of more than 100 varieties to help distinguish between types of trees. Essentially, the fingerprinting would be the last word on what types of coffee trees were growing in Puerto Rican soil.

In theory, Puerto Rico grows just two main rust-resistant varieties of high-quality Arabica coffee, which is the only kind that Starbucks serves: Limani and Fronton. But the analysis revealed that the theory didn’t match reality. “What we found from these leaves is that three-quarters of the samples were not what we thought they were,” said Hanna Neuschwander, communications director for World Coffee Research. “They were labeled Limani, and it was Fronton. Or it was labeled Limani but it was something totally different that we weren’t even aware Puerto Rico had. This kind of mix-up is far from unique to Puerto Rico, but it definitely presents a challenge when there is so much urgency to replant quickly.”

Being able to distinguish between varieties will help nurseries use only genetically pure seed types to reestablish a healthy crop. But with as many as 20 million coffee trees destroyed, there’s not enough raw material locally to work with. The island will have to import seeds, which is a lot trickier than it might sound.

The U.S. Department of Agriculture tightly restricts the import of seeds to U.S. islands such as Puerto Rico and Hawaii because of concern over introducing pests or disease to existing crops. “Any time you move plant material, you can introduce disease,” said Neuschwander. Obtaining clearance requires a raft of approvals, followed by quarantine and testing. Agriculture officials, aware of the need to move quickly to help shore up the island’s coffee industry, are doing what they can to move things along, balancing potential risks of importing seeds with the need for high-quality coffee seedlings.

The process is already underway. Puerto Rico Coffee Roasters recently got approval to import 600 kilograms of seeds, enough to germinate up to 1.5 million plants. The first shipment will consist of 280 kilograms of a Nicaraguan variety called Marsellesa, which is close in genetic make-up to Puerto Rico’s local varieties to increase its chances of thriving on the island. It is also resistant to rust.

Arriving packaged in plastic containers, the seeds endure a seven-month quarantine. First, they are escorted like VIPs to nurseries where they are carefully placed in a refrigerated chamber. Then they’re transported to germination banks, where they’re transferred to sandy cubes until they’ve sprouted. After a final inspection from USDA, they can be planted in fields.

The seeds are just one component of the rebuilding effort, said German Negron, general manager of Puerto Rico Coffee Roasters. As new coffee trees are planted, farmers will have to learn how to properly space their plants, manage the pH of the soil and juggle the right balance of crops to be profitable. “The first step to rebuilding is having the right seeds,” he said. “But we also need to help farmers rebuild their farms in ways that are more efficient and increase productivity, which is very low per acre.”

If there’s a silver lining to the devastation from Hurricane Maria, it just might be found in the form of an unassuming, jelly bean-sized coffee seed. It will be years before the island completely recovers, but as the rebuilding takes place step by step, there is hope that it will nurture a heartier, healthier coffee industry.

“If Puerto Rico farmers get new trees and learn better farming methods, their quality will go through the roof,” Goodejohn said. “The whole world will want to buy their coffee.” 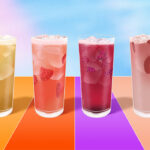 As a progression against those goals, the company commits to Carbon Neutral Green Coffee and to conserve water usage in green coffee processing by 50%, both by 2030.

A historical look at Starbucks sustainability efforts since the company began in 1971.