WHITE CENTER, Wash. – Malaika Nettey, 19, knows she’s on the cusp of the next major phase of her life. She just doesn’t know yet what she wants it to be.

She loved math classes in high school, and is also interested in communications or a career in social media, “but I don’t really have a path,” she said.

That’s what brought her to the Mentor Monday event this week at a Starbucks in White Center, south of Seattle. Starbucks is partnering with LinkedIn through a pilot program that connects people willing to serve as mentors with those who are seeking guidance in the professional world. This week, 21 Starbucks in 15 cities across the country hosted events with young people from non-profit organizations including Big Brothers Big Sisters, Year Up, Urban League, Juma, City Year and more and connected them with professionals who volunteered online through LinkedIn.

At the White Center event, dozens of mentors and mentees gathered around tables in the community room of the Starbucks store and spilled out into the café area. Every 15 minutes for almost two hours, pairs rotated to give mentees a chance to connect with professionals from a host of areas.

At the end of one table, Jack Pines, 49, was talking to two young men. “I’m here to tell you anything is possible,” said Pines, a software engineer who was able to build a successful career despite not having a bachelor’s degree. He credits much of his success for having had great mentors along the way.

“You always have to be willing to learn and to step outside your comfort zone, which is what a lot of the people here tonight have already done,” he said, gesturing around the room.

As a former high school principal, David Oclander, now director of global social impact at Starbucks, has seen first-hand the power of mentors on a young person’s life. “There’s a real need for this,” he said. “The biggest hope I have is that this really intensifies the passion for connection between everybody who is here and that the take away from both sides is how enriching and rewarding it can be.”

In one chair, surrounded by several young people, was Louis Garcia, president and CEO of Big Brothers Big Sisters of Puget Sound. Several mentees at the event, including Nettey, had come through the program, which serves children through age 18. Garcia had dropped by to see the event and was inspired to stay and serve as a mentor.

“Inherent in every child is the potential to do great things,” Garcia said. “Our job as a community is to help kids reach their potential.”

Garcia said that without key mentors he’s had along the way, “I could have been dead or in jail.” Growing up in Florida, he had one high school guitar teacher in particular who made an impact, encouraging him and always finding ways to keep him busy and distracted from getting into trouble.

“He’d say ‘soccer season is over, why don’t you come and play music for the school musical?’” remembers Garcia. “He always helped push me to be better. He probably saved many, many lives.”

Research done by Big Brothers Big Sisters has shown that having a mentor can yield a host of benefits, he said, including improved grades, better social and emotional outlooks and a reduction in risky behaviors.

But while the benefits of having a mentor are great, there’s a growing need for more adults willing to take on that role. Big Brothers Big Sisters of Puget Sound has a waiting list of 805 kids in need of mentors. LinkedIn continues to encourage members to sign up as mentors who can offer professional guidance in a host of areas.

‘You can be whatever you want’

As the daughter of immigrants from China, Sophia Price grew up seeing her parents work long hours at their jobs as a janitor and bus driver to make ends meet. “My mom always said, ‘I work really hard so you can be whatever you want to be,” she said.

But when Price graduated from high school, she struggled to know what she wanted to do next. A hard worker, Price knew there wasn’t money for college.

Instead of pursuing a degree, she began seeking mentors and other ways to learn and grow. She also enrolled in Year Up, a one-year training program for low-income young adults that offers skills development, corporate internships and more.

“Having many mentors has given me an advantage,” Price said. She learned not only about skills she needed for various positions but questions she can ask during interviews such as “what’s the problem in your organization I can help solve?”

She was recently hired as a data analyst, a position she found out about through one of her mentors. But she attended Monday’s mentoring event because she knows that even though she’s working, it’s important to keep learning and growing.

“Mentors have knowledge and experience and can pass those gems to me,” she said.

By the end of the evening, the group of mentees, including Nettey, was energized. She’d gotten specific tips on how to refine her resume, key words to include and broader career advice as well. Several mentors she’d met had offered to stay connected and she planned to take them up on it.

That’s the best outcome that anyone could hope for, said Oclander, of Starbucks.

“Our country needs a focus on connection,” he said, “and to find ways to bring people back together.” 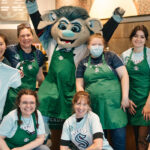