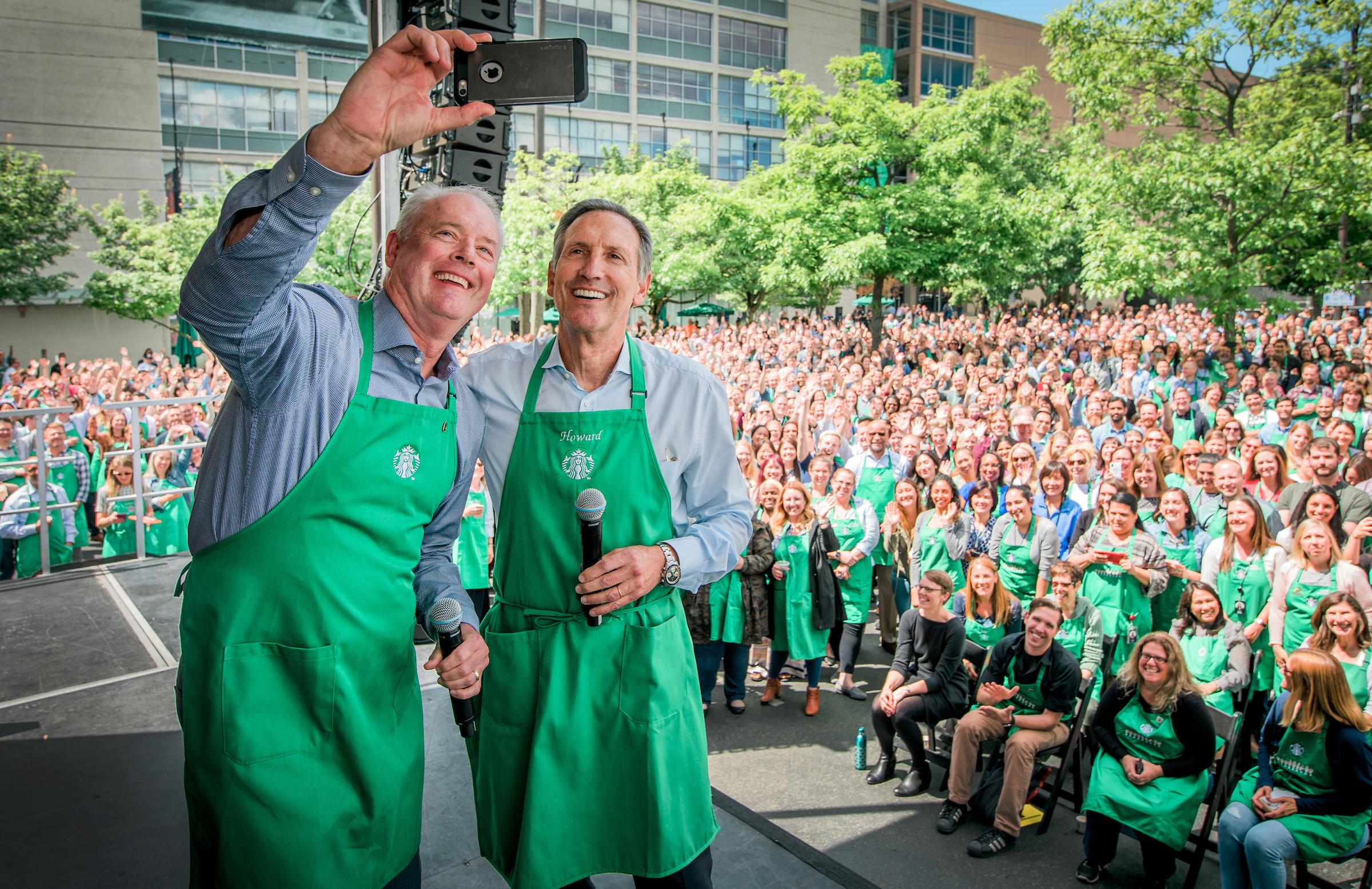 Nearly 40 years ago, Howard Schultz first walked into the Pike Place store. “I stepped across the threshold and was swept into a world of coffee and community,” he told Starbucks partners last month when he announced his plans to leave the company. “It seems like yesterday.”

Today, June 25, marks another milestone for Schultz and the company as he prepares to step down tomorrow and become chairman emeritus.

In his honor, we take a look back at what he describes as “the journey of a lifetime.” 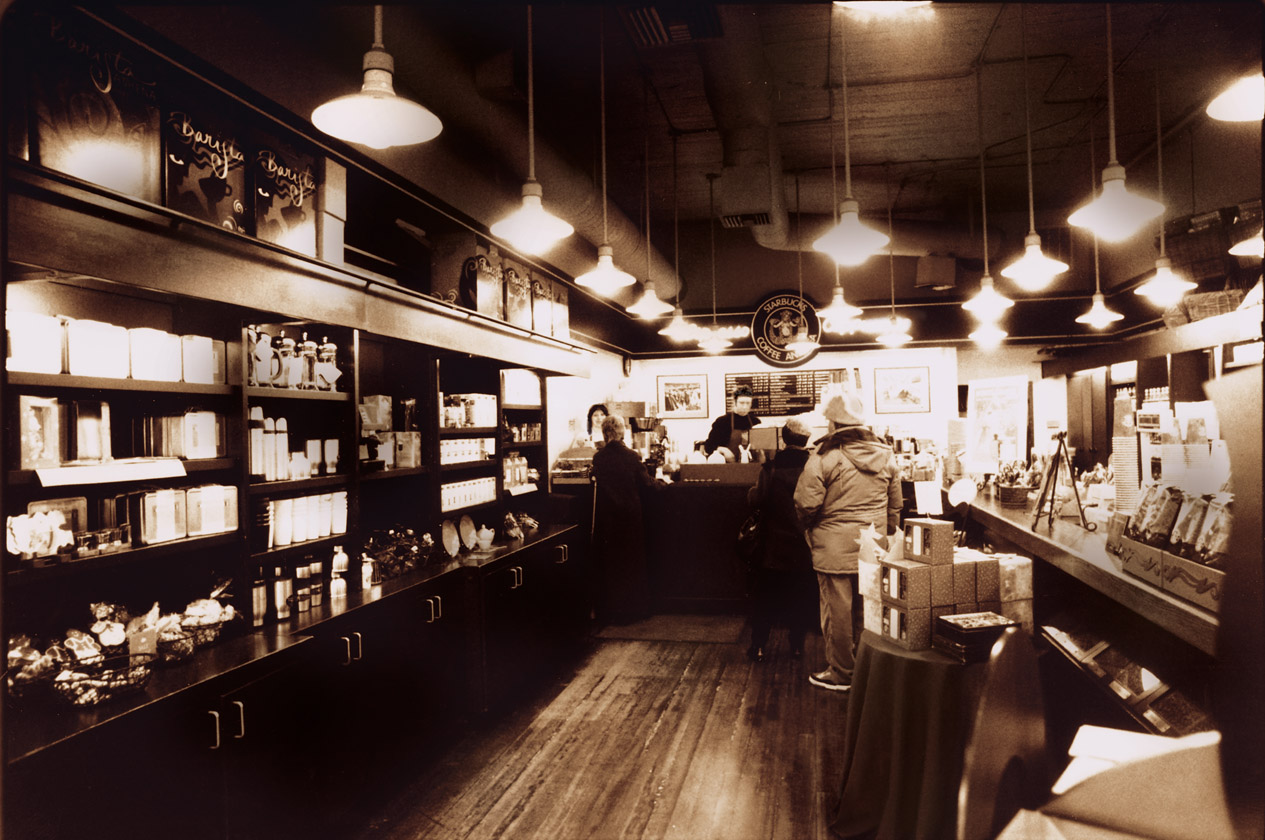 Howard Schultz walks into Starbucks first store at Seattle’s Pike Place Market, a retailer of whole-bean coffee, tea and spices. “The minute the door opened, a heady aroma of coffee reached out and drew me in,” he said in his book, “Pour Your Heart into It.” He is invited to try a cup of Sumatra at the counter, “By the third sip, I was hooked. I felt as though I had discovered a whole new continent.” He heads back to home to New York, still feeling the tug of Starbucks. 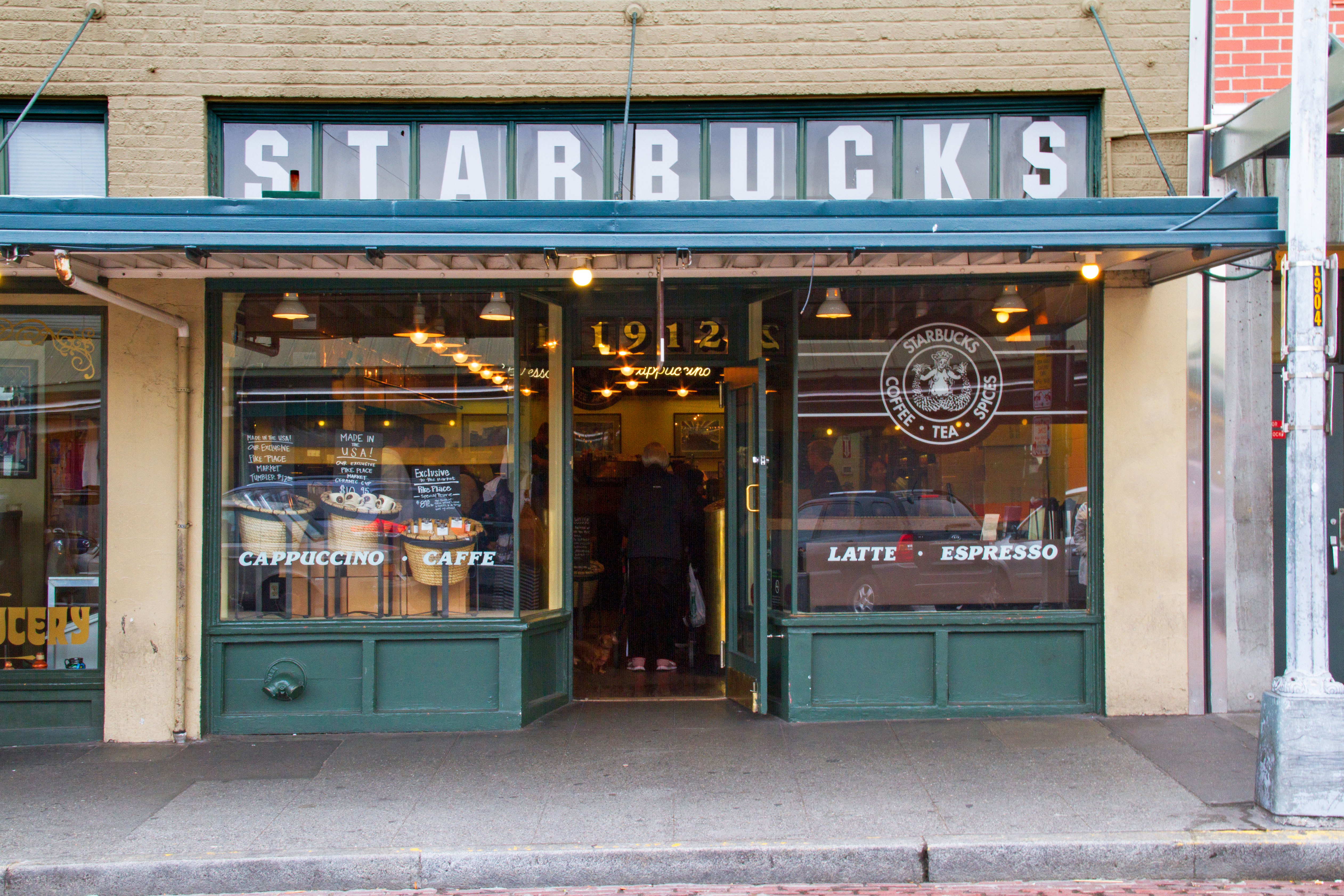 After a year of coaxing, Schultz convinces founder Jerry Baldwin to hire him. Schultz joins Starbucks as director of retail of operations and marketing. 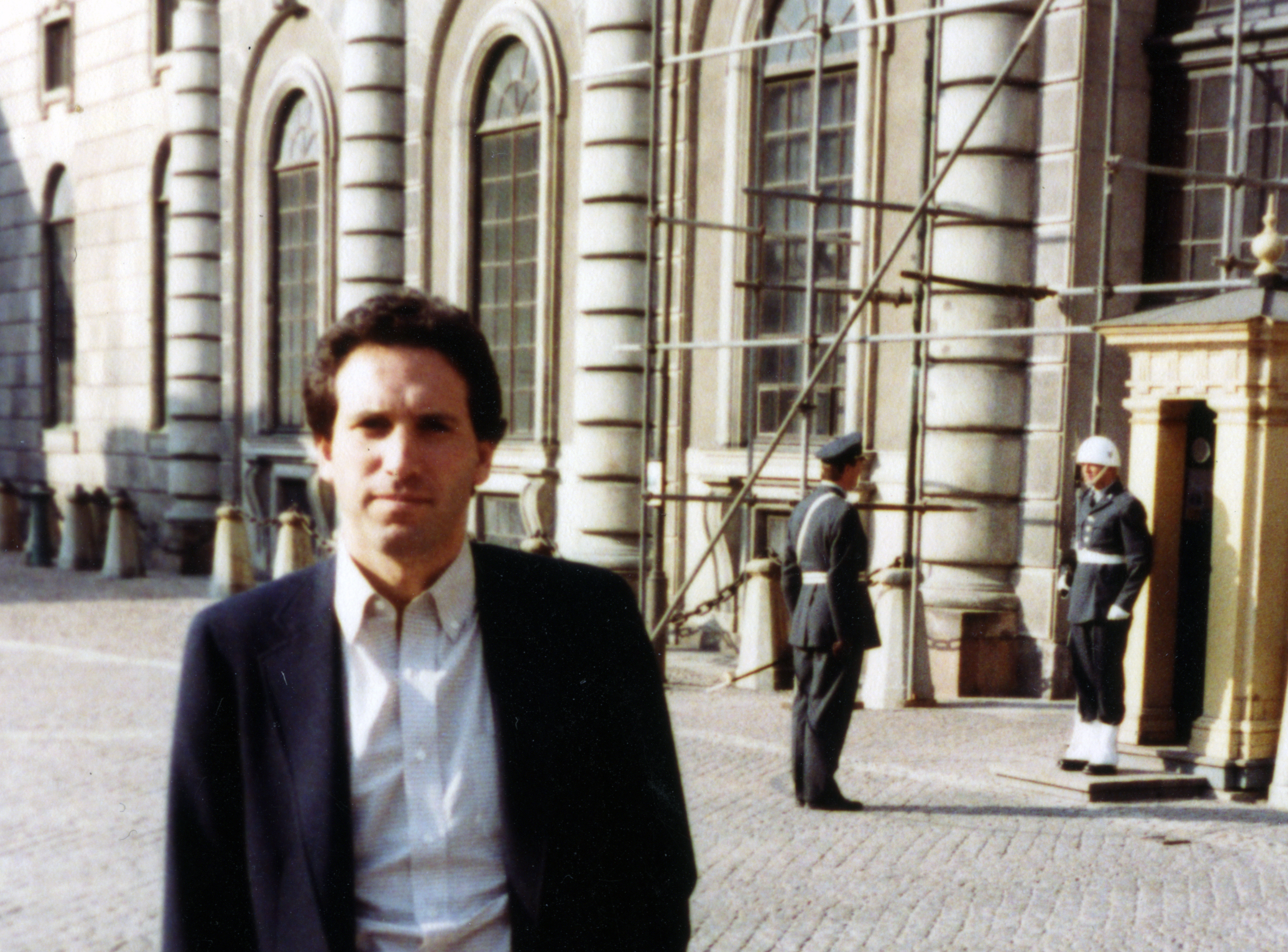 Howard visits Italy for the first time for a trade show and is captivated by Milan’s espresso bars. “In each shop I visited I began to see the same people and interactions, and it dawned on me that what these coffee bars had created, aside from the romance and theater of coffee, was a morning ritual and a sense of community,” said Schultz. He flies back to Seattle with a vision to re-create the experience at Starbucks. “What we had to do was unlock the romance and mystery of coffee, firsthand, in coffee bars,” he said. 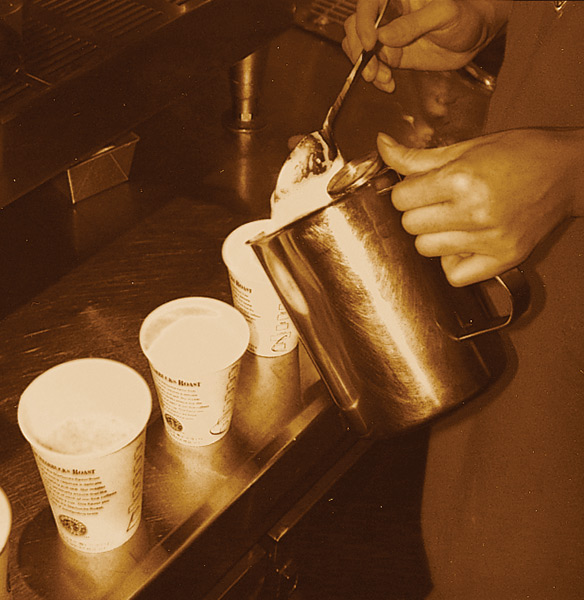 Schultz convinces Starbucks founders to test the coffeehouse concept in a new store at 4th & Spring in downtown Seattle and the first Starbucks® Caffè Latte is served. This successful experiment is the genesis for a company that Schultz founds in 1985. 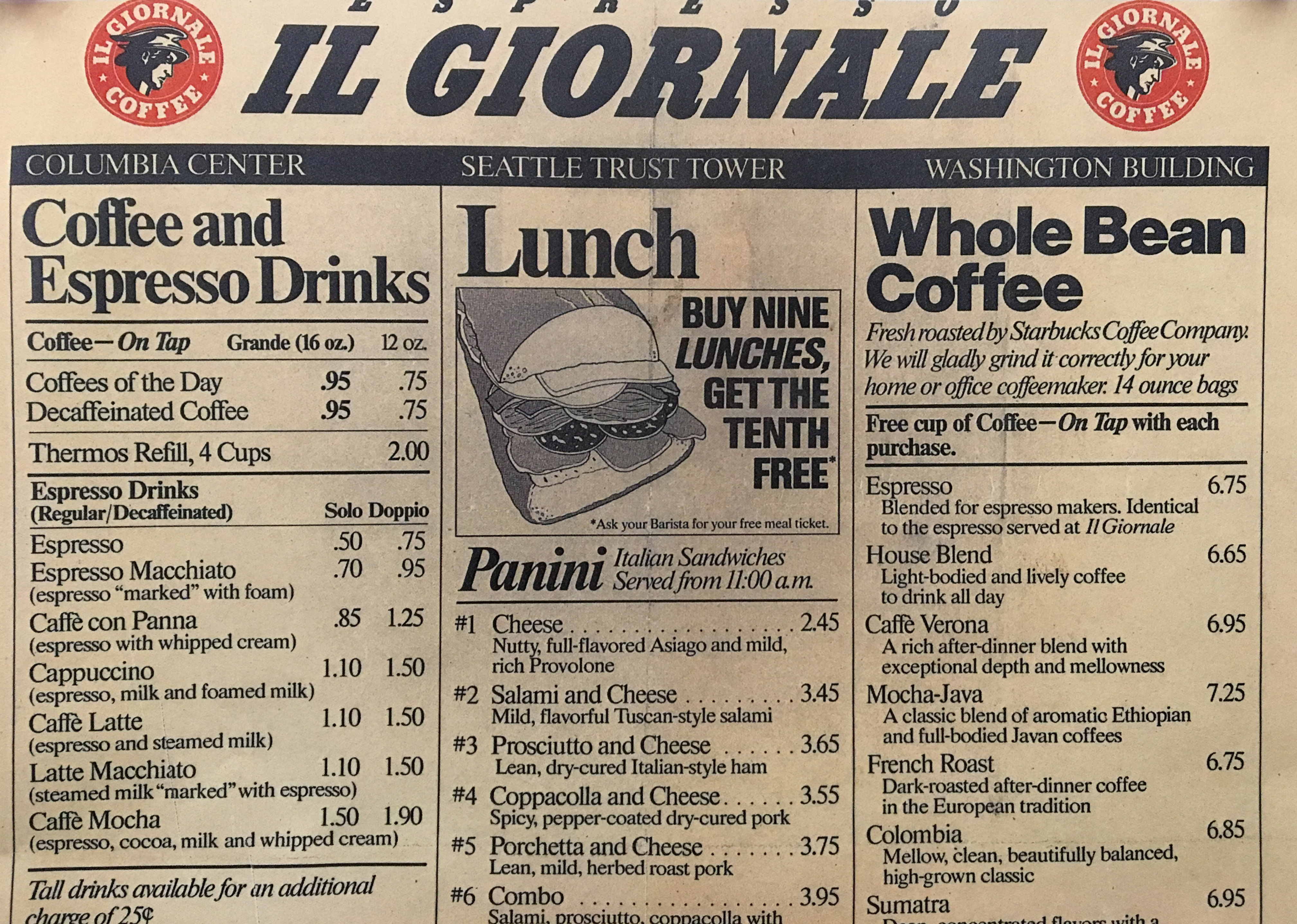 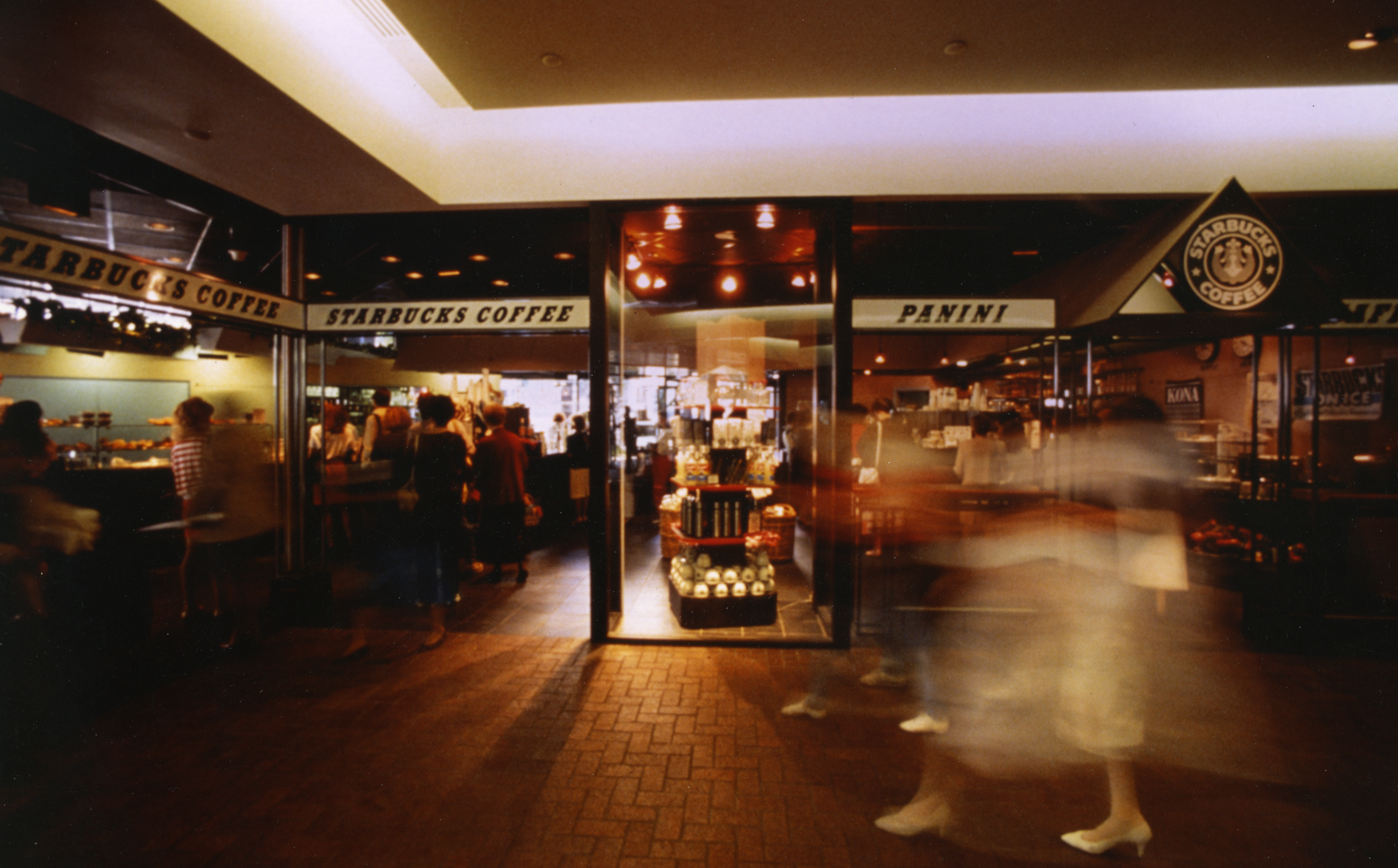 Il Giornale acquires Starbucks assets with the backing of local investors and the company begins its next chapter as a coffeehouse, and opens its first stores in Chicago and Vancouver, Canada. The next year, Starbucks would go on to offer full health benefits to eligible full- and -time employees, including coverage for domestic partnerships. 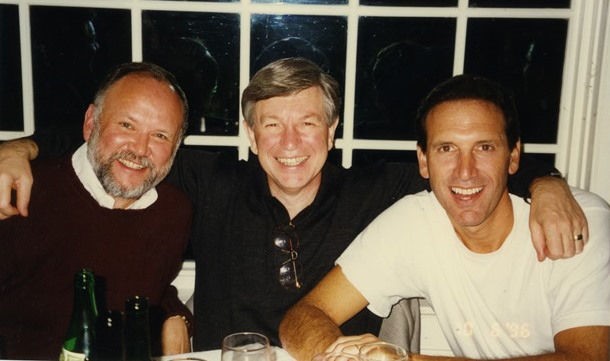 Schultz is soon joined by two new leaders who helped transform Starbucks from small chain of coffee shops to an international brand. Howard Behar (left) started with Starbucks in 1989 as vice president of sales and operations, Orin Smith (middle) came on board the next year as vice president and chief financial officer. The trio worked so closely together they were “H20” (for two Howards and one Orin). Smith would go on to become ceo of the company from 2000-2005.

1990s: Journey to the source of Starbucks coffee 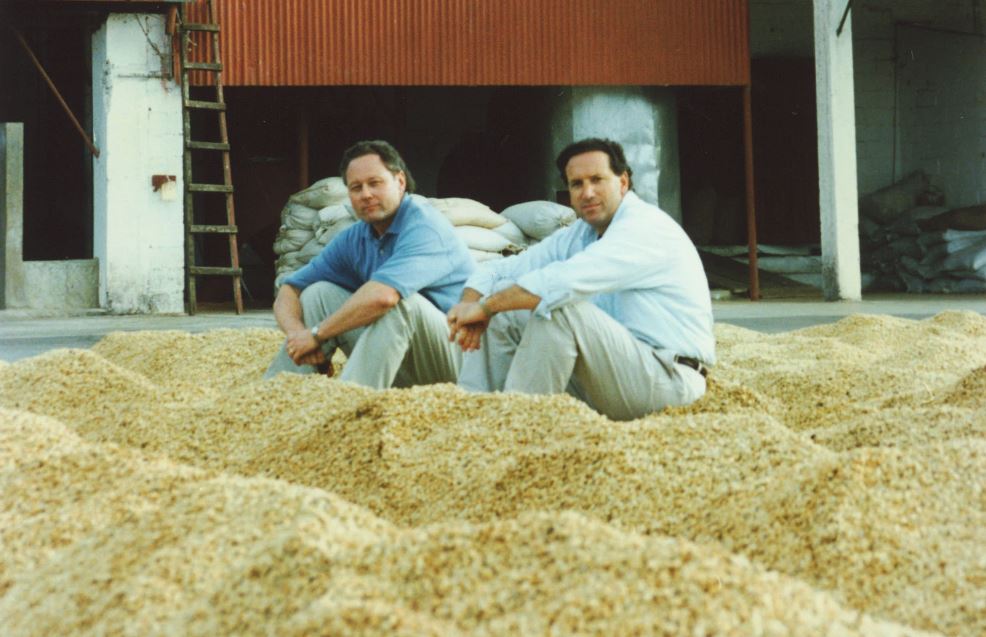 Schultz travels to Guatemala with Starbucks coffee buyer, Dave Olsen, seen here on a patio of drying coffee beans at a farm. 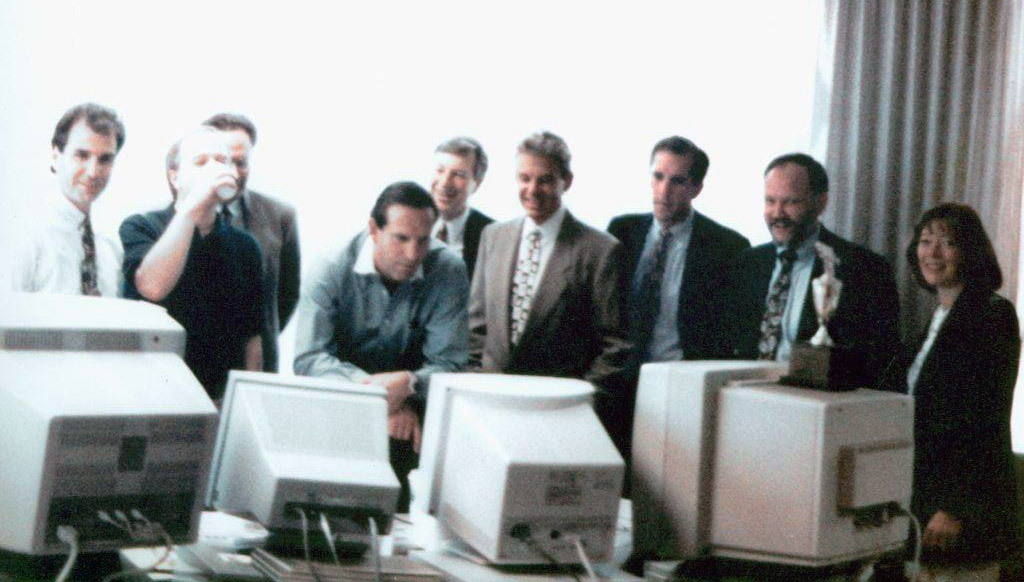 Howard and his leadership team watch the monitors during Starbucks first day of trading on the Nasdaq Stock Market. With the IPO, Starbucks employees became known as “partners,” because they have a share in the company’s success through its stock option program, Bean Stock. 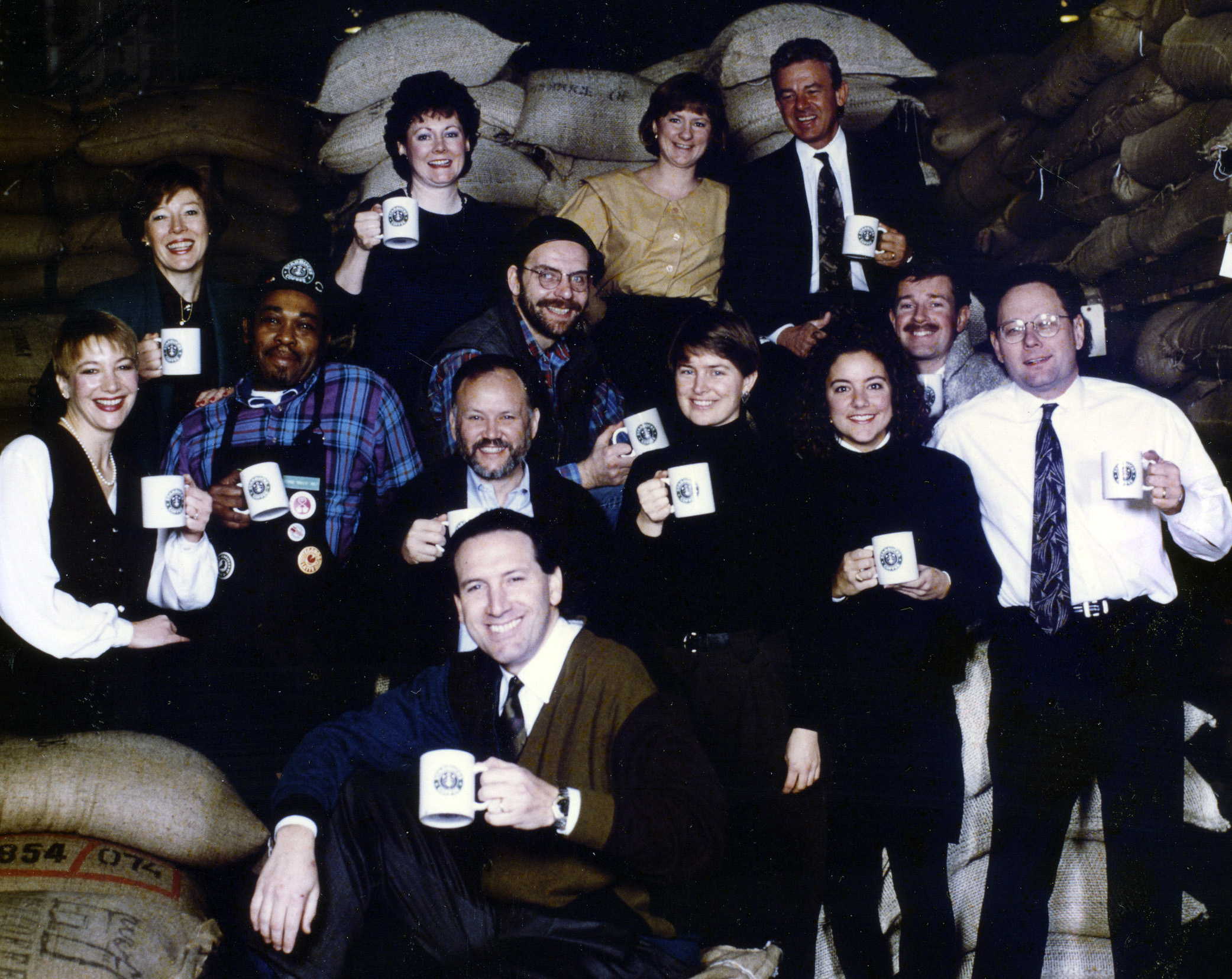 Schultz (center) celebrates with partners as the company reaches 100,000 customers per day for the time and looks ahead to opening its first stores in Boston and New York. In 1996, it would go on to open its first store outside North America in Tokyo, Japan. 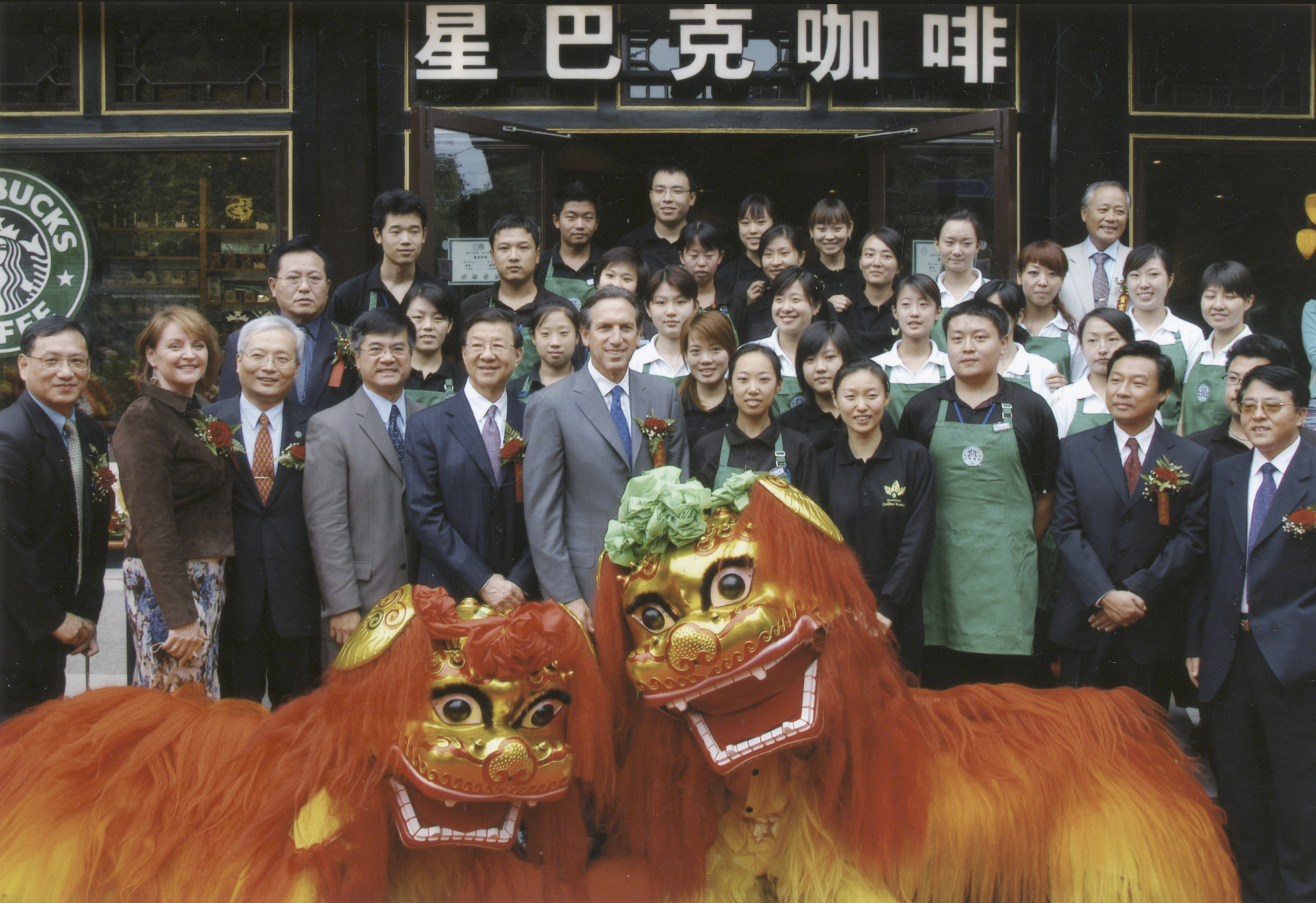 Schultz joins company leaders, dignitaries and baristas in Beijing for the opening of the company’s first store in China on Jan. 11, 1999, the company’s 10th market outside the United States. The next year, Schultz will transition to a new role as chairman and chief global strategist, where he would focus on innovation and help open Starbucks stores in 30 new countries over the next nearly eight years. 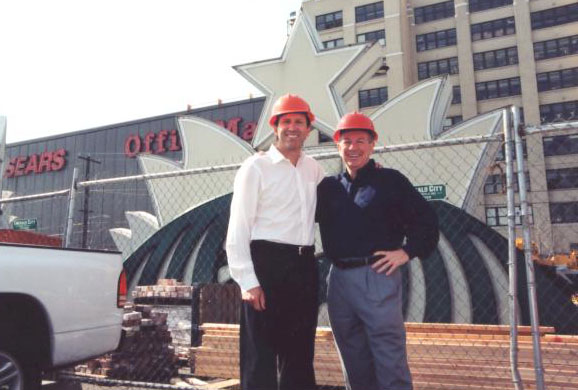 After a 6.8 magnitude earthquake jolts the company’s headquarters in Seattle on Feb. 28, 2001, Schultz and ceo Orin Smith see the Siren brought down safely from atop the clock tower for repairs. By the end of the year, the company would introduce the Starbucks Card, open its 5,000th store and announce its fourth two-for-one stock split. 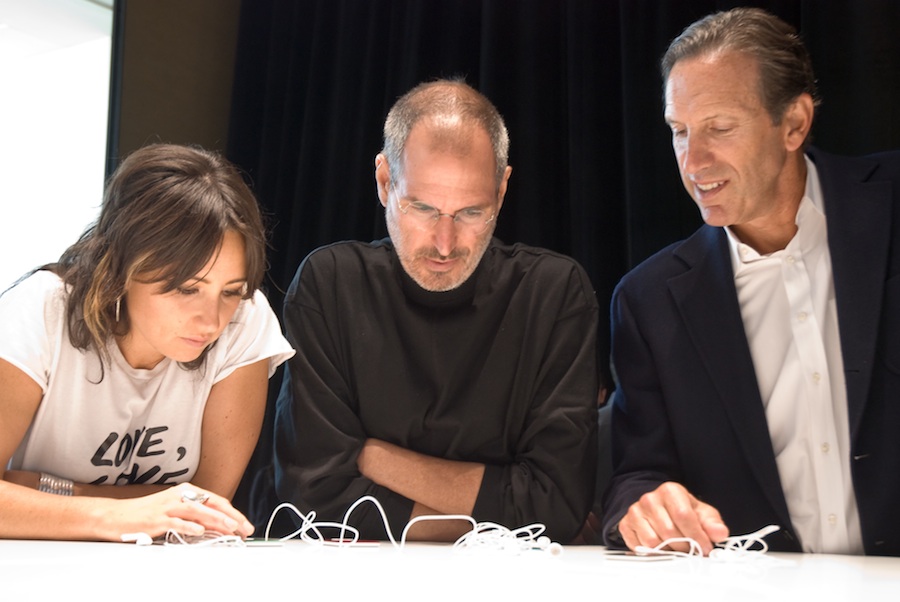 Schultz joins KT Tunstall (left) and Steve Jobs on stage on September 5, 2007 at the Apple Developers conference to announce a partnership between Starbucks and Apple to enable customers to buy the song they’re hearing in Starbucks stores. The Starbucks Card mobile app for iPhone would follow in 2009 and mobile payment in 2011. 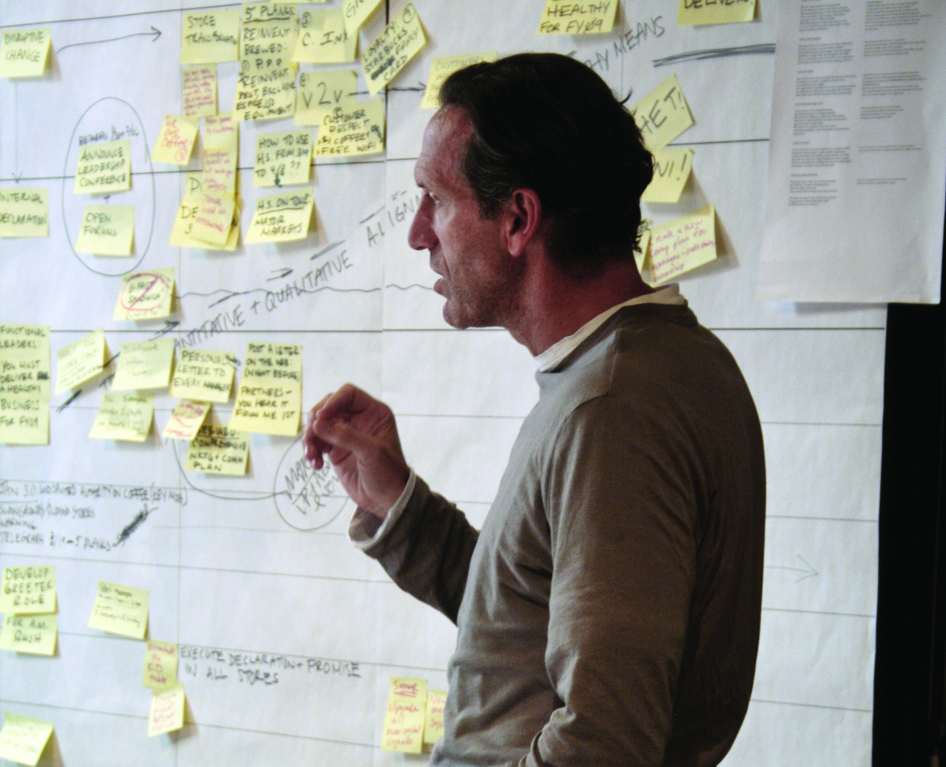 Schultz returns as chief executive officer on Jan. 7, 2008 as Starbucks rapid growth begins to slow and same-store sales decline for the first time in the company’s history. He leads the company’s transformation, refocusing on core values and reigniting coffee passion and innovation. 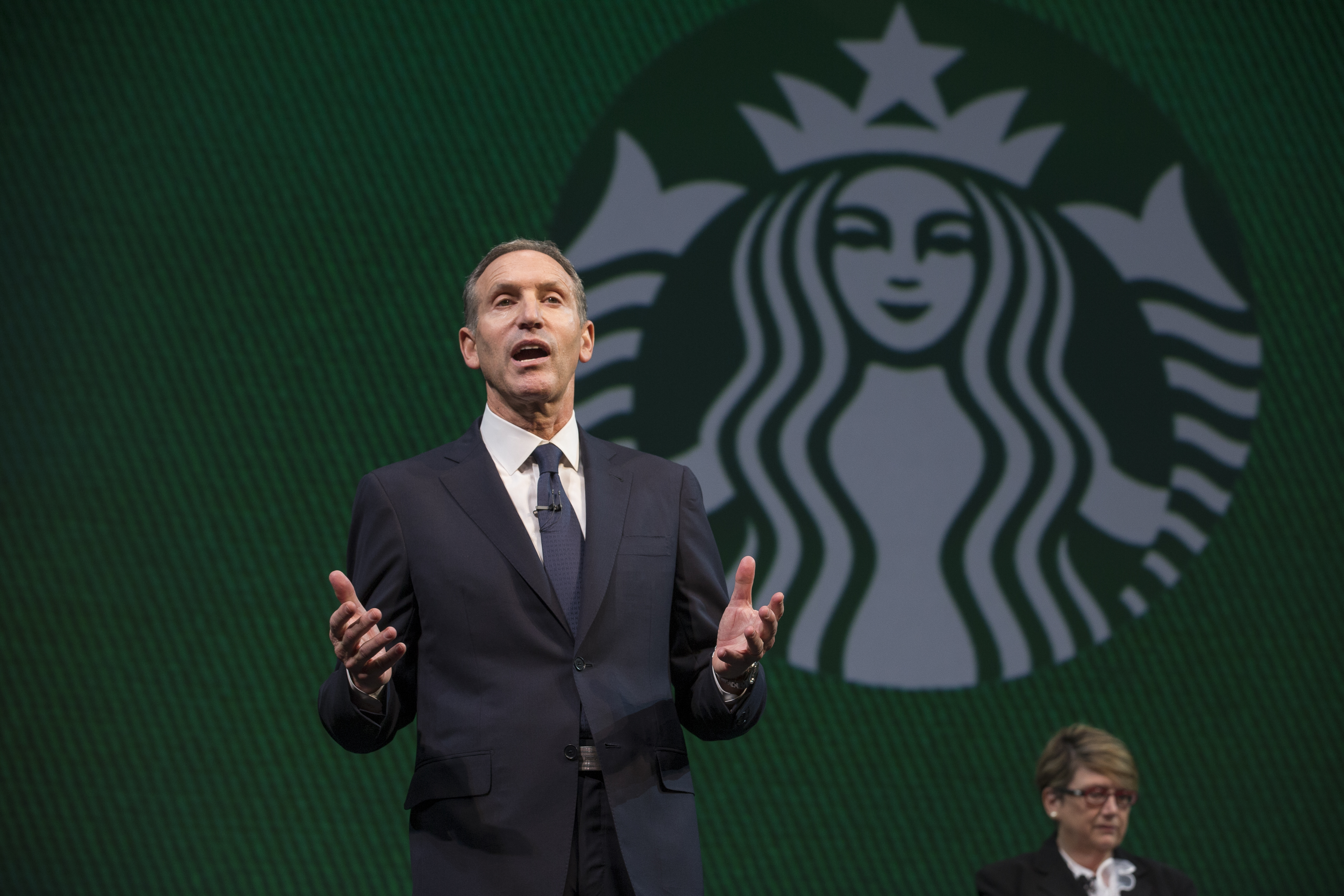 Schultz makes a statement on diversity and equality during a spontaneous exchange at the Starbucks Annual Meeting of Shareholders on March 13, 2013. In response to a stockholder who voiced his view that the company had lost customers because of its support for marriage equality, Schultz said, “Not every decision is an economic decision. The lens in which we are making that decision is through the lens of our people.” 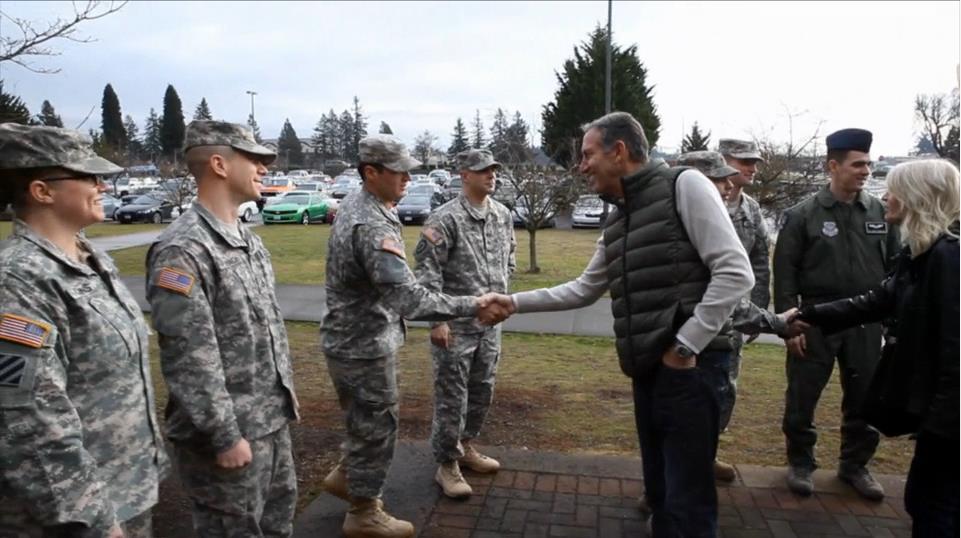 On Nov. 6, 2013, Schultz announces Starbucks commitment to hire 10,000 veterans and military spouses by 2018, goal the company would achieve ahead of schedule in 2017. Starbucks now aims to hire 25,000 by 2025. Here, Schultz is shown meeting with soldiers on a visit to Joint Base Lewis-McChord in Lakewood, Wash.

2014: Raising the flag for LGBTQ inclusion

Schultz (left) joins partners in celebration of the first raising of the Pride flag at Starbucks headquarters in Seattle on June 23, 2014. 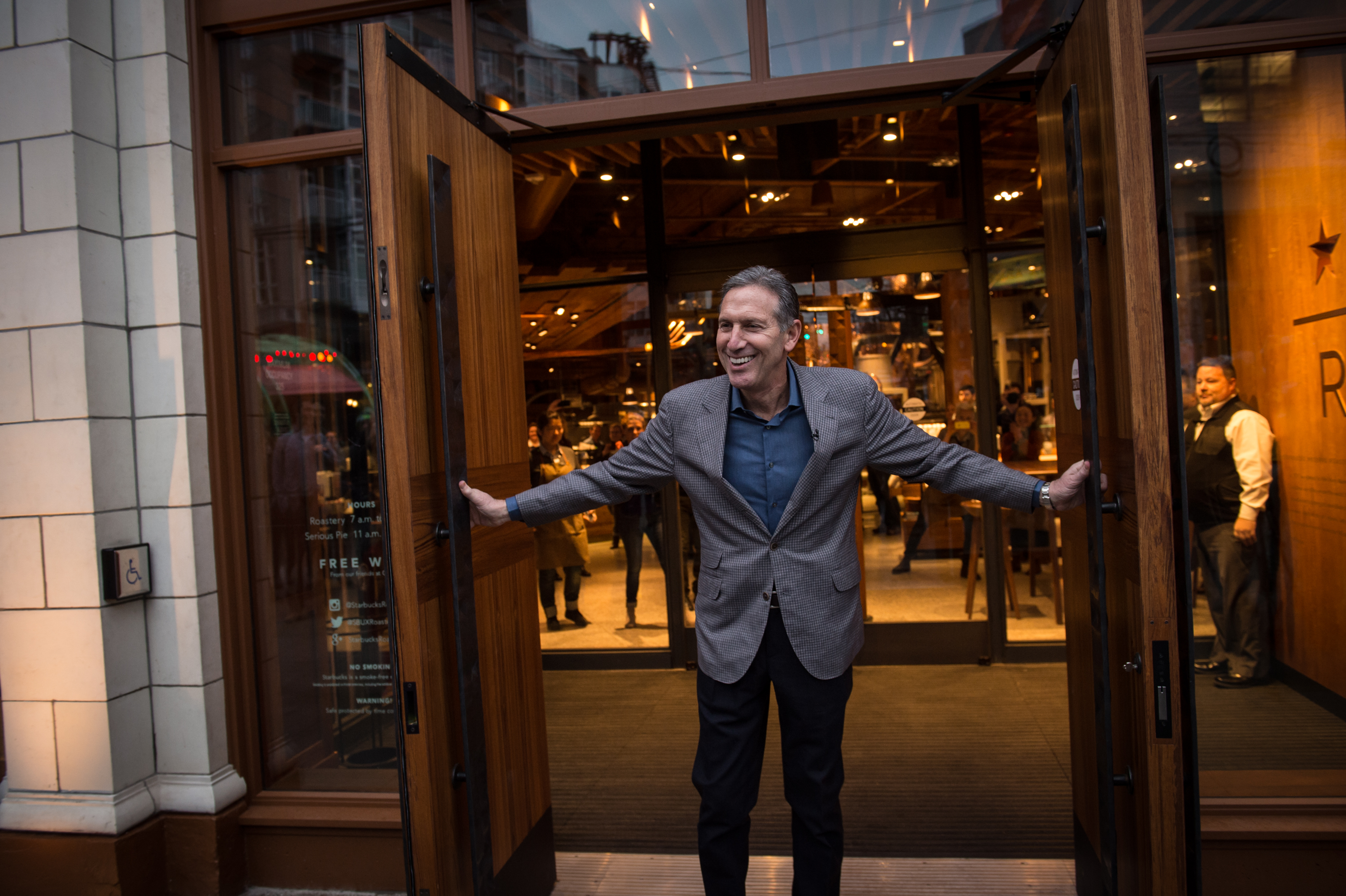 Schultz opens the doors at the grand opening of the first Starbucks Reserve Roastery in Seattle on December 5, 2014, the realization of an idea he’d had five years earlier to take customers on a magical carpet ride with an immersive coffee experience. 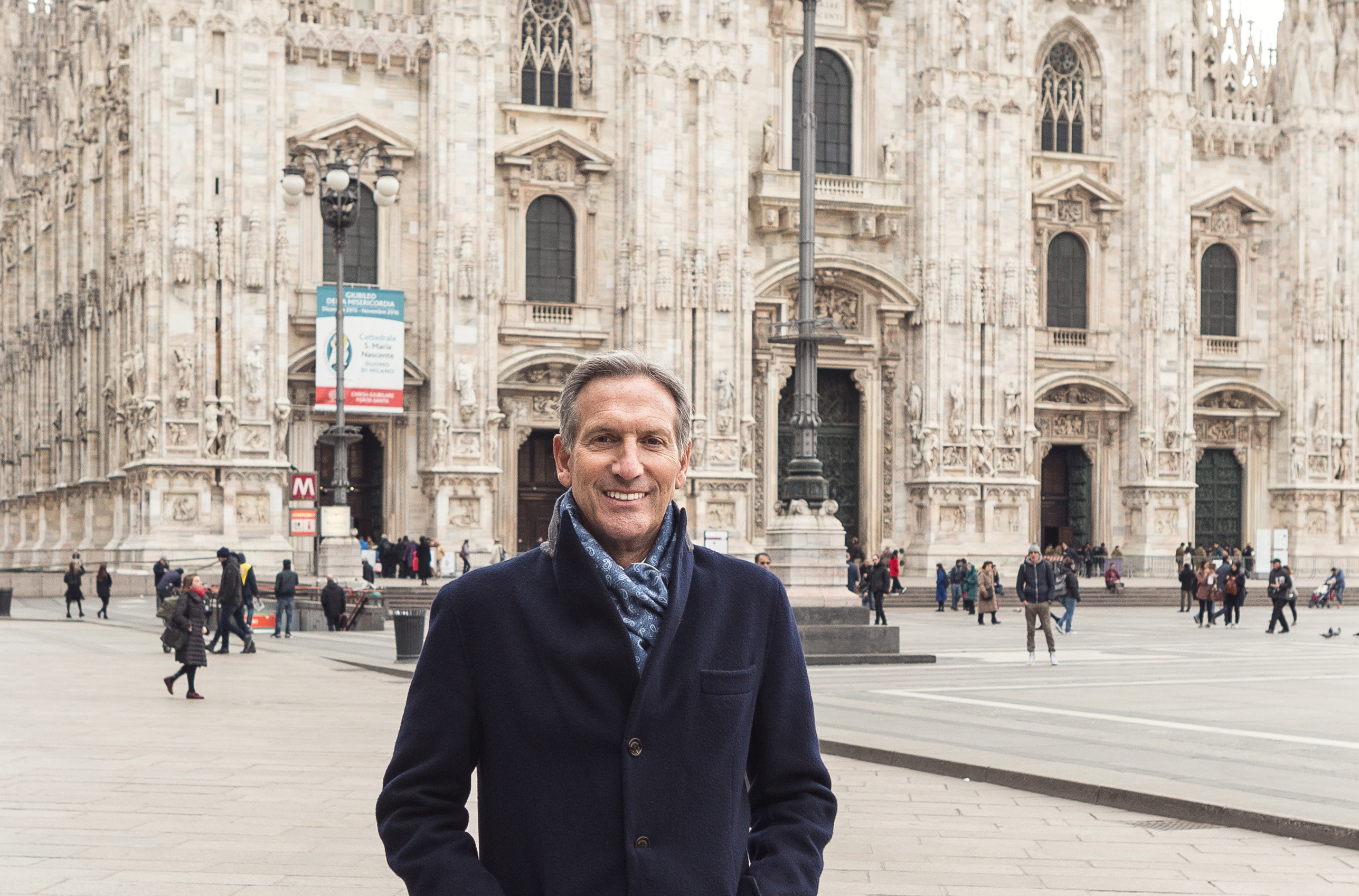 More than 30 years after Schultz first walked Italy’s cobblestone streets, Schultz returned to the city to announce Starbucks would be opening a Starbucks Reserve Roastery in Milan in 2018. 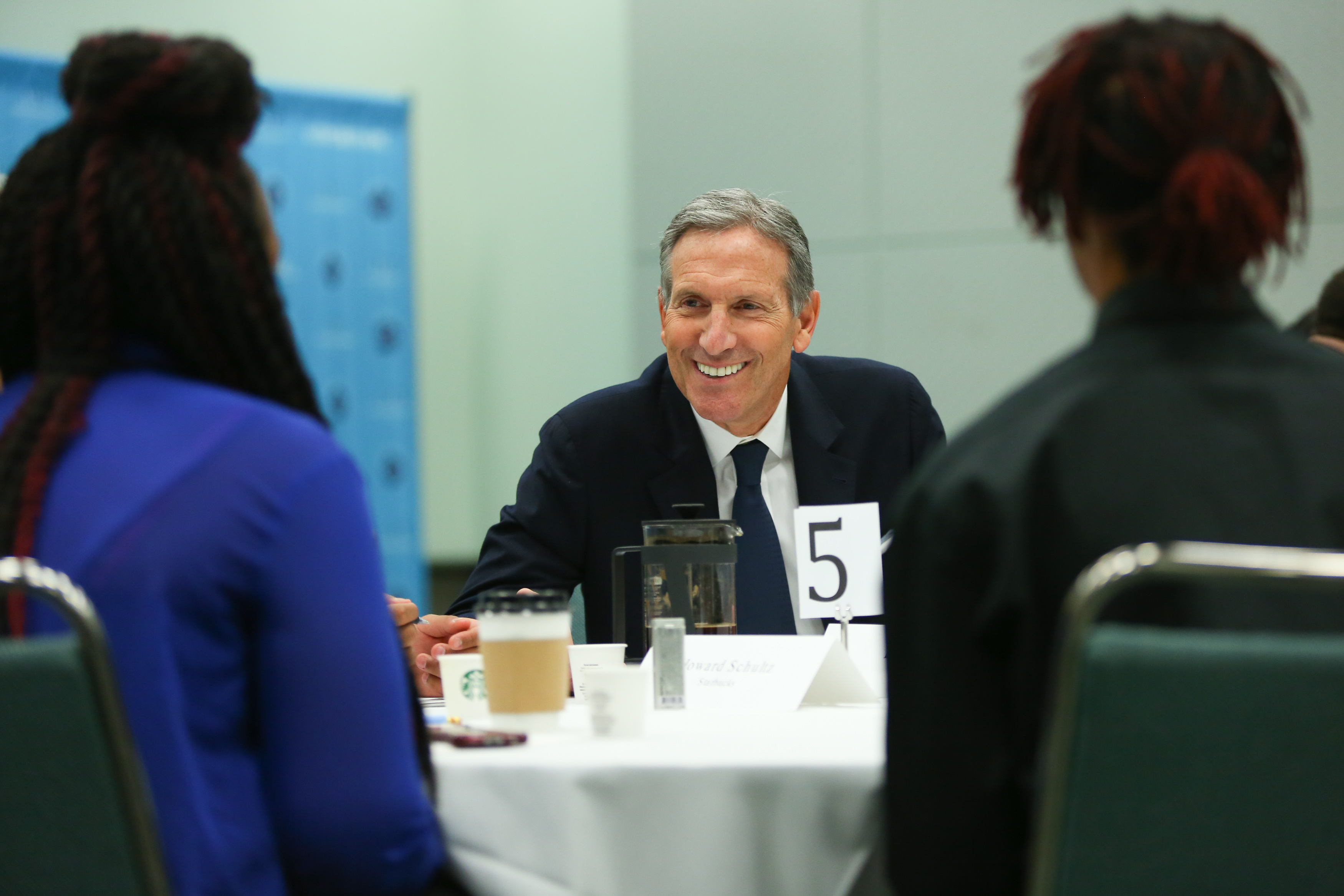 Schultz shares a laugh with young people attending an Opportunity Fair & Forum in Los Angeles on Feb. 11, 2016. The day-long resource and job fair is one of those hosted across the country by the 100,000 Opportunities Initiative, a coalition led by Starbucks to provide inspirational experiences young adults between the ages of 16 and 24 who aren’t working and aren’t in school, including job interviews, college counseling, resume building and workshops. In 2015, Starbucks committed to hiring 10,000 Opportunity Youth, a goal that was surpassed and expanded to a commitment of 100,000 by 2020. 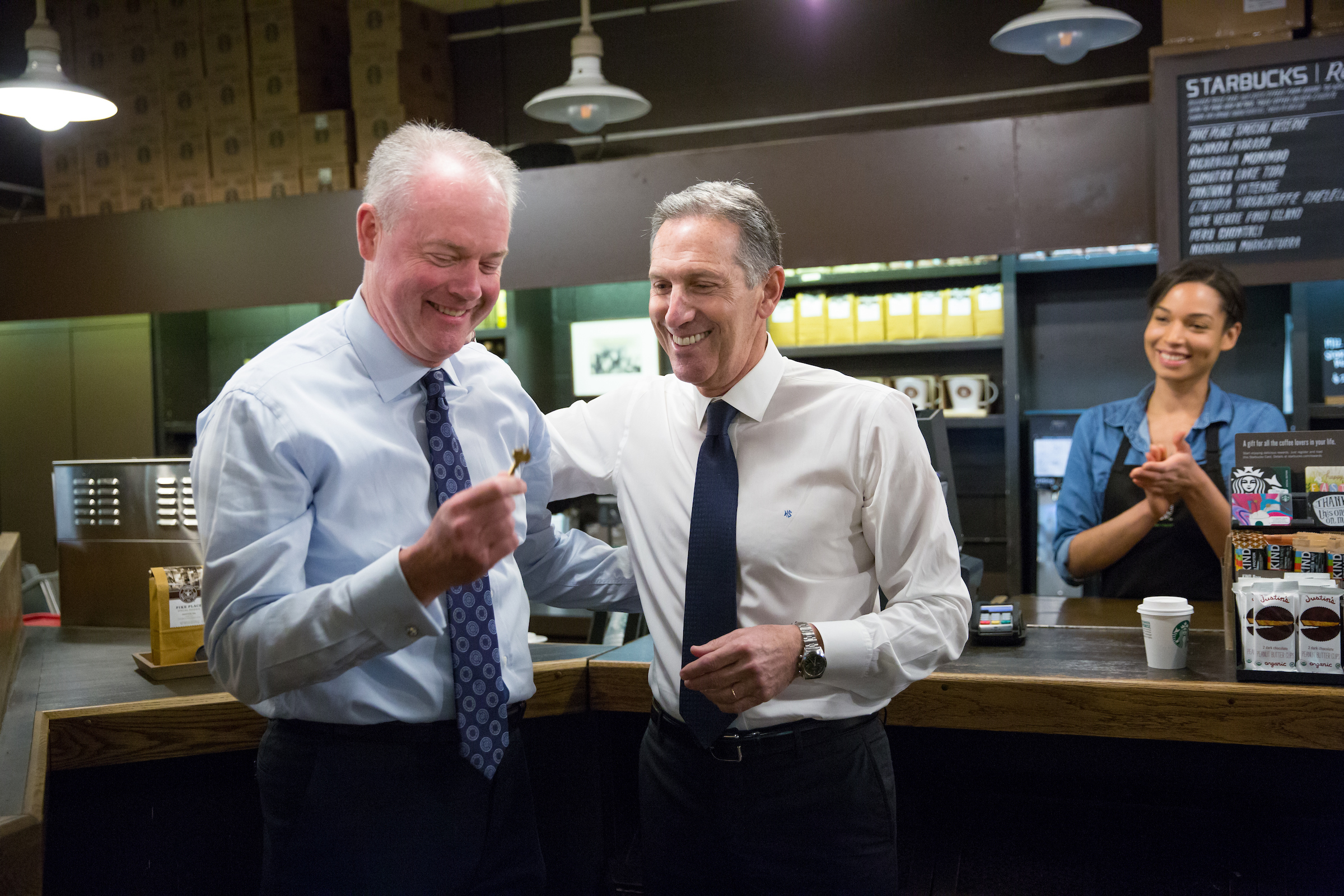 Schultz presents incoming ceo Kevin Johnson with the key to the company’s original Pike Place Market store on March 22, 2017, while Schultz takes on a new role as executive chairman, focusing on design and development of the Starbucks premium brand and the company’s social impact initiatives. 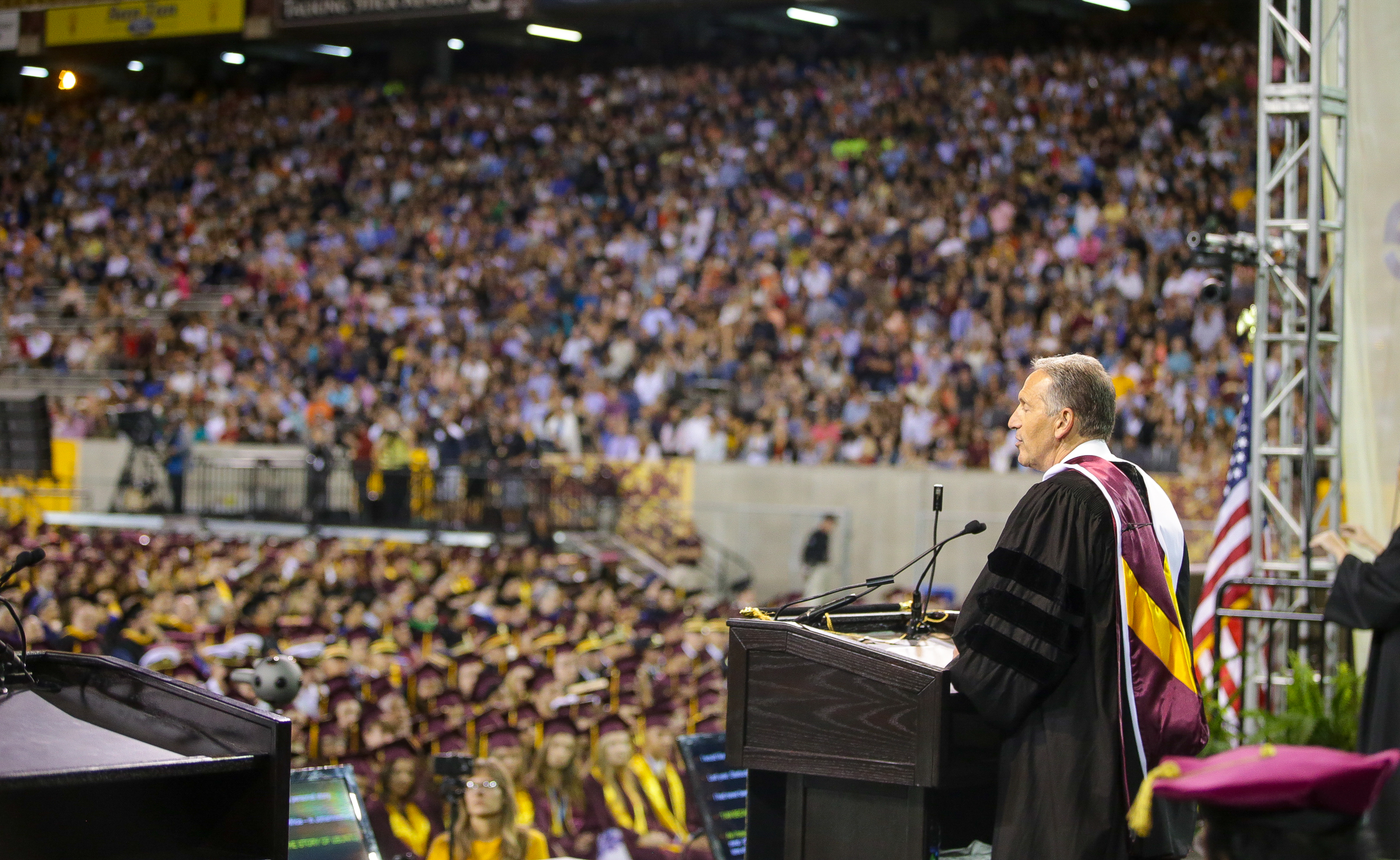 Schultz addresses graduates at Arizona State University’s commencement on May 8, 2017, including more than 260 graduates who earned a bachelor’s degree through the Starbucks College Achievement Plan, a program Starbucks announced three years earlier. “Your station in life does not define you and the promise of America is for all of us,” he says. 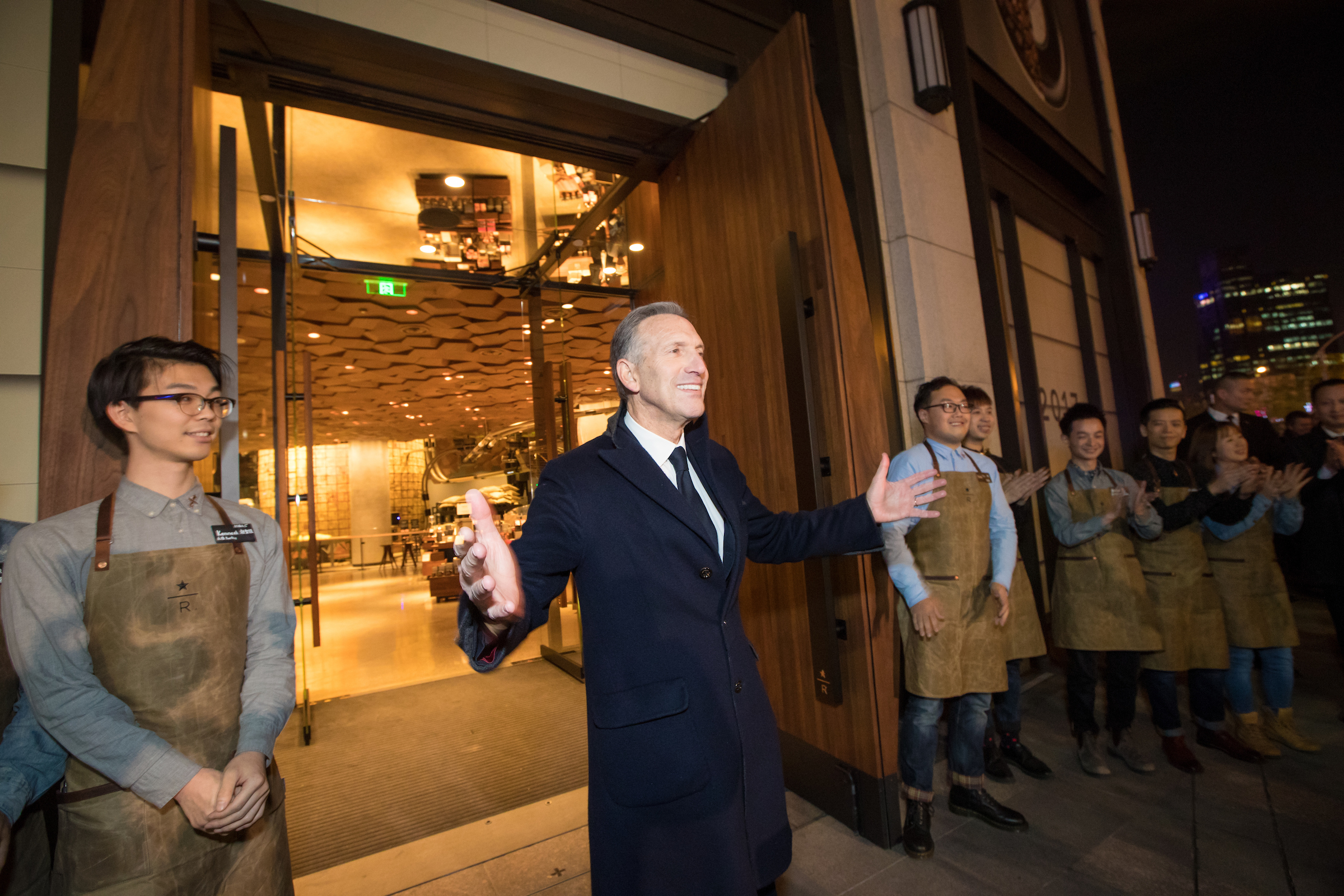 Schultz welcomes guests to the Starbucks Reserve Roastery on Dec. 5, 2017 in Shanghai. Others are planned for Milan, New York, Tokyo and Chicago. The company now has more than 330,00 partners and 28,000 stores around the world. 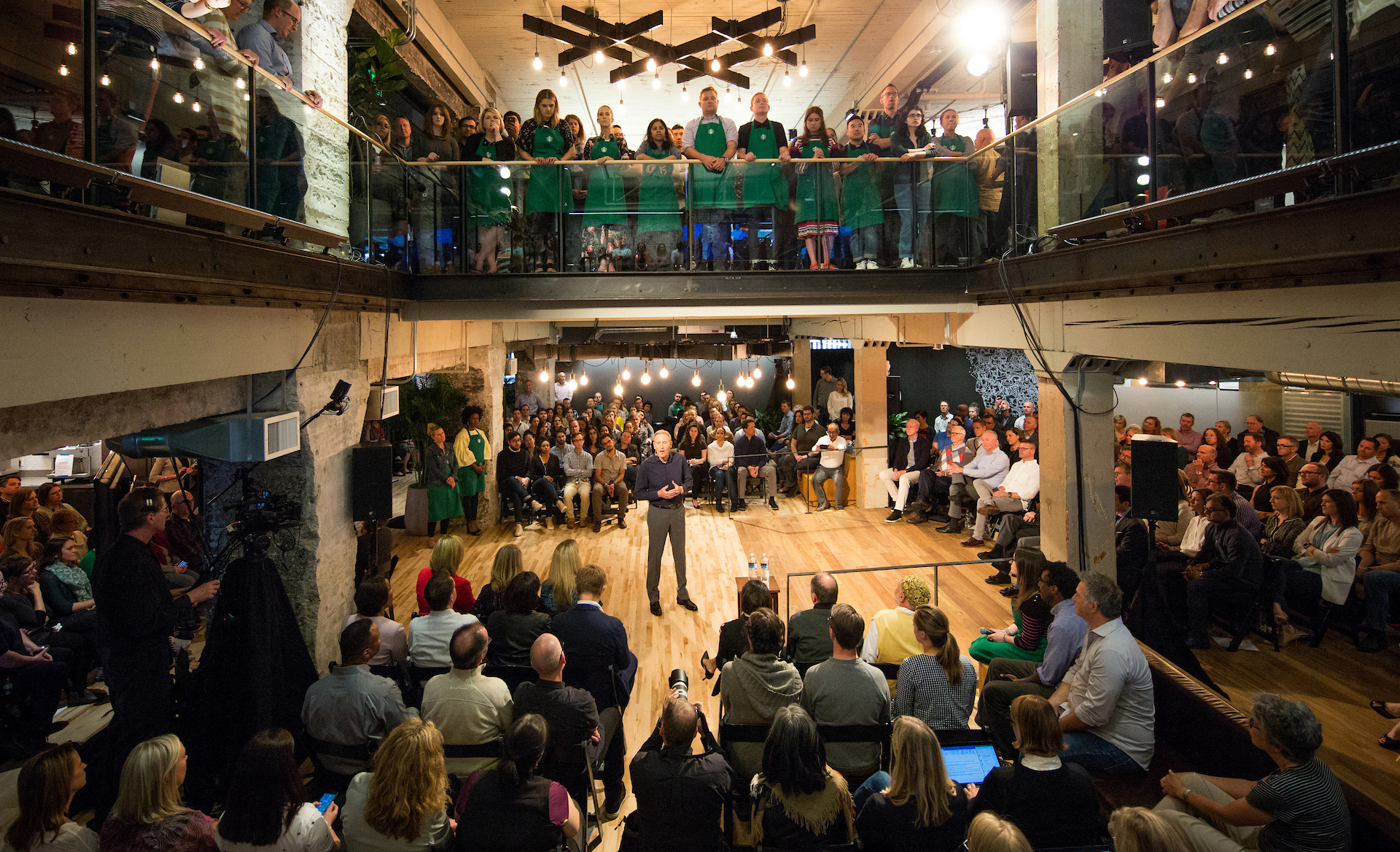 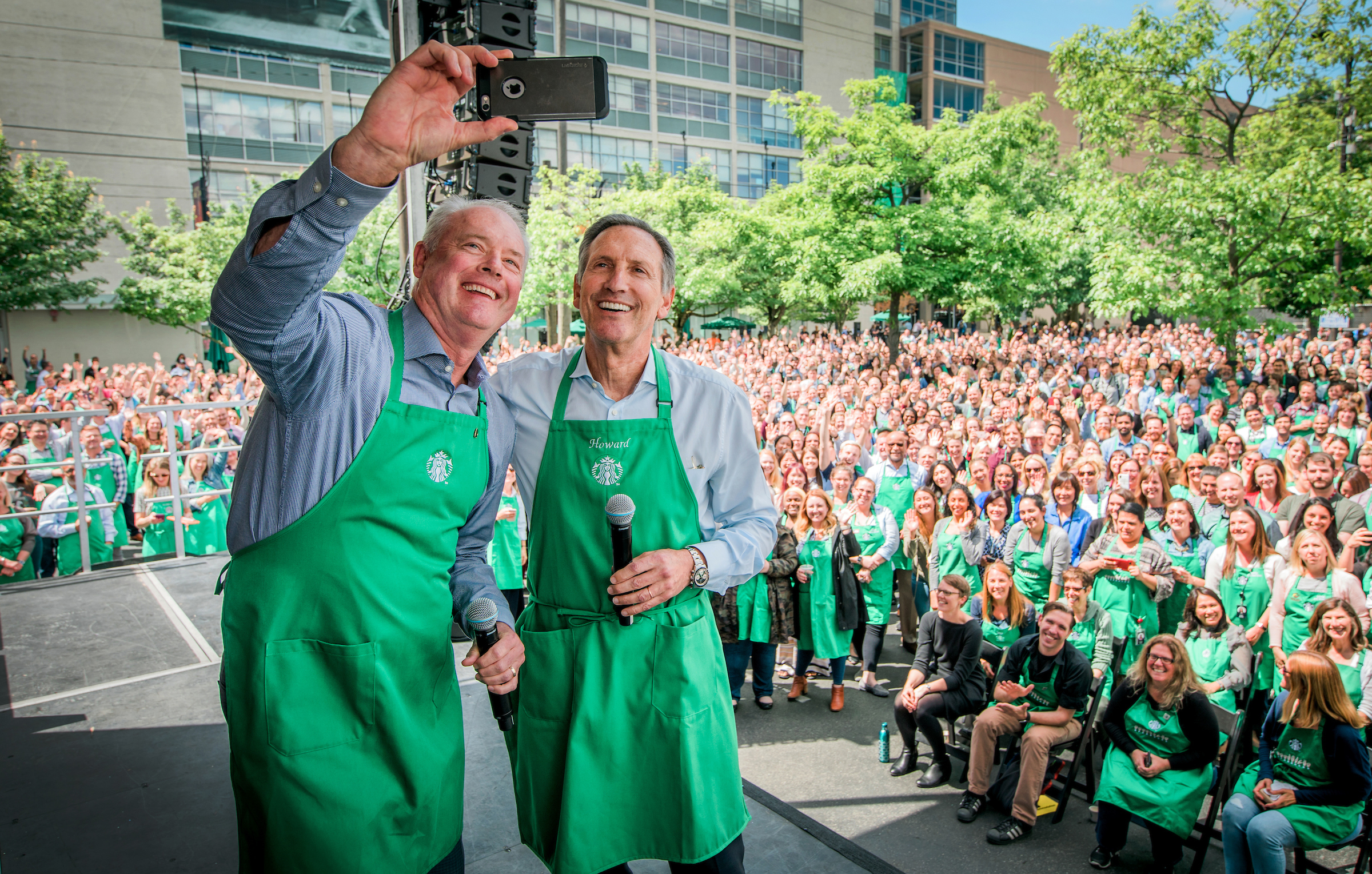 To the thousands of partners gathered outside Starbucks headquarters on June 25, 2018, Schultz says, “I leave the stage with great humility, great appreciation, and great respect in thanking everyone who’s here today, and all the people you represent. I have never been more proud to wear the green apron.”