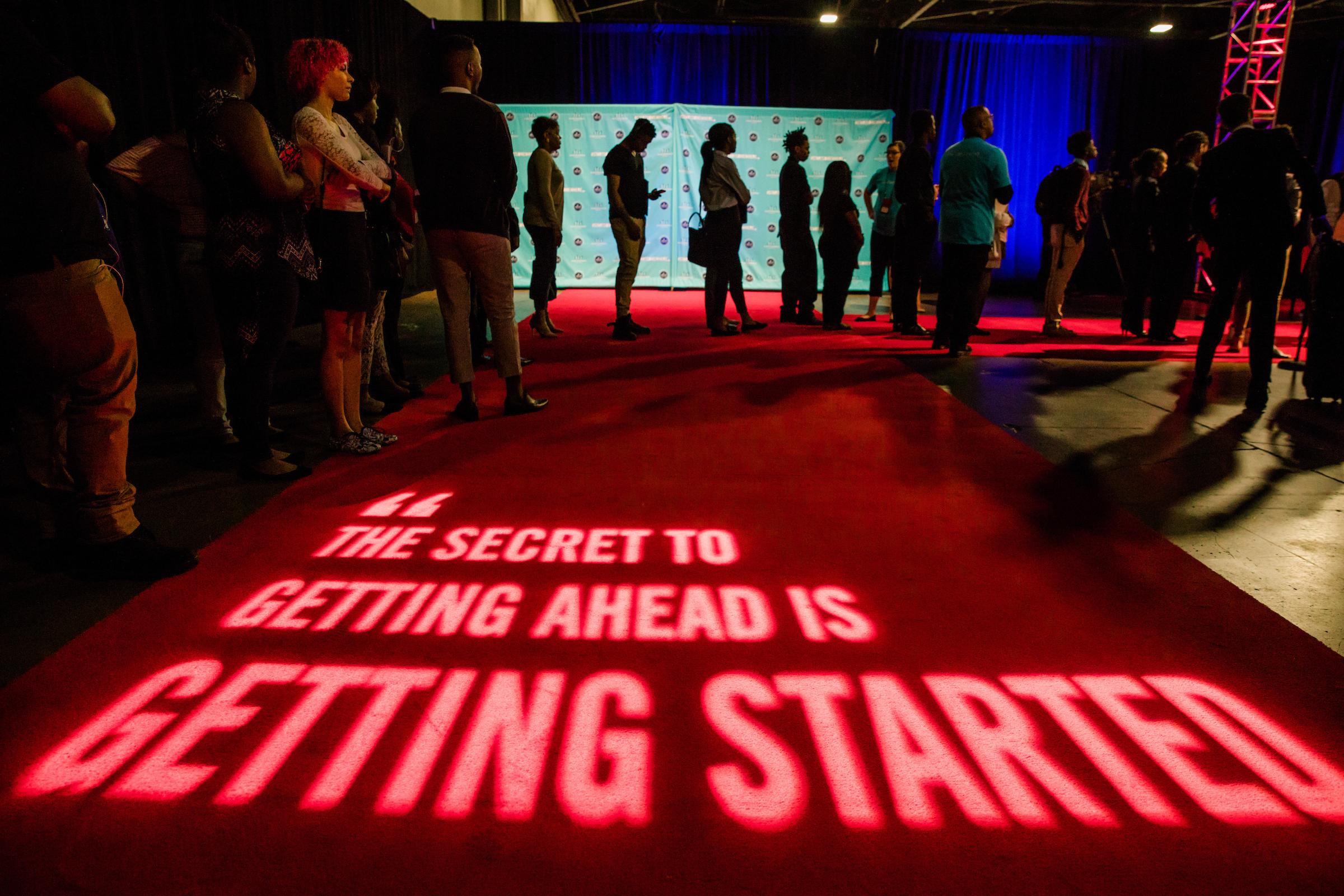 ATLANTA—They arrived slowly at first, and then by the busload. They wore suits and bowties and dresses and hoodies. They carried backpacks and resumes and sometimes even babies. More than 2,600 young Atlantans attended Thursday’s Opportunity Hiring Fair, hundreds of whom walked away with job offers, including Ashley Calzada and Christopher Hughes.

“The secret to getting ahead is getting started.” The words of Samuel Langhorne Clemens, better known as Mark Twain, are projected on the red carpet welcoming attendees. The day-long Atlanta hiring and resource fair is the seventh of its kind put on in the last two and a half years by the 100,000 Opportunities Initiative, which aims to help an estimated 4.9 million young Americans ages 16 to 24 who are not in school or employed. Called “opportunity youth,” these young people have talent and potential, but often face unique barriers to success.

A dapper crowd awaits the 9 a.m. door opening for the hiring fair. The event is put on by the 100,000 Opportunities Initiative, a national coalition of private, public and philanthropic organizations working together to connect companies with talented young people, which makes both stronger. In 2015, the coalition set a goal of hiring 100,000 young people by 2018, a goal that was reached in the first year. The coalition has now reached 55 employers and upped its goal to connecting 1 million young people with jobs by 2021.

Ashley Calzada accidentally parked at the wrong end of the Georgia World Congress Center Thursday morning, roughly the equivalent of parking six city blocks from the hiring fair. No big deal, normally, but she was wearing red heels with her “power suit,” and by the time she arrived, her feet were pinched and she was fanning herself with a folder full of resumes. Nordstrom and Goodwill to the rescue – the companies had a joint booth at the hiring fair to provide attendees with free workwear, and gave Calzada a more comfortable pair of shoes.

Julissa McWashington, a member of Starbucks global social impact team, encourages Christopher Hughes at the hiring fair. Hughes had experienced a frustrating time applying for jobs – when he tried to log in to his email account from a fair computer to get a digital copy of his resume, he couldn’t remember the password, and to reset the password, he needed a code to his mobile phone. Unfortunately, his cell phone was temporarily disconnected. McWashington, who was wandering the floor helping attendees, wouldn’t take no for an answer. She helped him create a LinkedIn profile and fill out a paper application for a job at Starbucks.

A hiring fair volunteer in the resume-building section holds an attendee’s baby while she works. Hiring fair applicants face a number of barriers to employment. For some, it’s child care. For others, like attendee Christopher Hughes, it’s email or phone access. The fair aimed at providing attendees with a number of resources to help them, whether it was with resumes and career counseling or hair and wardrobe.

Christopher Hughes gets his photo taken at the LinkedIn booth before building a new LinkedIn profile. He just finished his first semester of college and is looking for a part-time job so he doesn’t have to take on too much debt during his first few years of school.

Ashley Calzada came to the hiring fair prepared with a folder full of resumes, but also jumped at the chance to refine it with the help of hiring fair volunteers. She’s interested in working for a number of companies, including Delta, Hilton, Starbucks, Ulta and Sephora.

When she finishes her resume, Calzada makes a beeline for the Delta Air Lines booth to give them her contact information. She’s never been on an airplane, and has never left Georgia or been more than an hour or two from home. To her, Delta symbolizes her dream of seeing more of the country and maybe even the world.

Christopher and Christian Hughes work on their LinkedIn profiles. The identical twins attended the hiring fair together, though Christian will soon move back to their hometown of Detroit to be with his girlfriend. He said he wanted to support his brother and maybe do some networking. The twins grew up with a single mother and for as long as they can remember have fiercely looked out for each other. “Growing up without a dad, my brother and I became our own dad.”

Ashley Calzada gets a hug after an interview with Charlene Albanese, a Starbucks store manager from Suwanee, Ga., who was in town to help support the hiring fair. Calzada left the hiring fair with a job offer from Starbucks and said she also hopes to receive other offers in the day or two following the fair. She’ll base her final job decision in part on whether the work schedule will allow her the flexibility to care for her two young daughters. “I’m feeling really excited to see what’s coming ahead,” she said. “I’m ready for something new.”

“I know for a fact he’s going to get it,” Christian Hughes said as he waited for his identical twin brother, Christopher, on a bank of chairs outside the interview area. Starbucks store managers Edward Sumpter and Christopher Riggs conclude their interview by offering Christopher a job. His face lights up, and he accepts with a handshake. He walked out and hugged his brother. “I’m going to go with the Starbucks job,” he said, beaming. “It was right here in front of my face.”