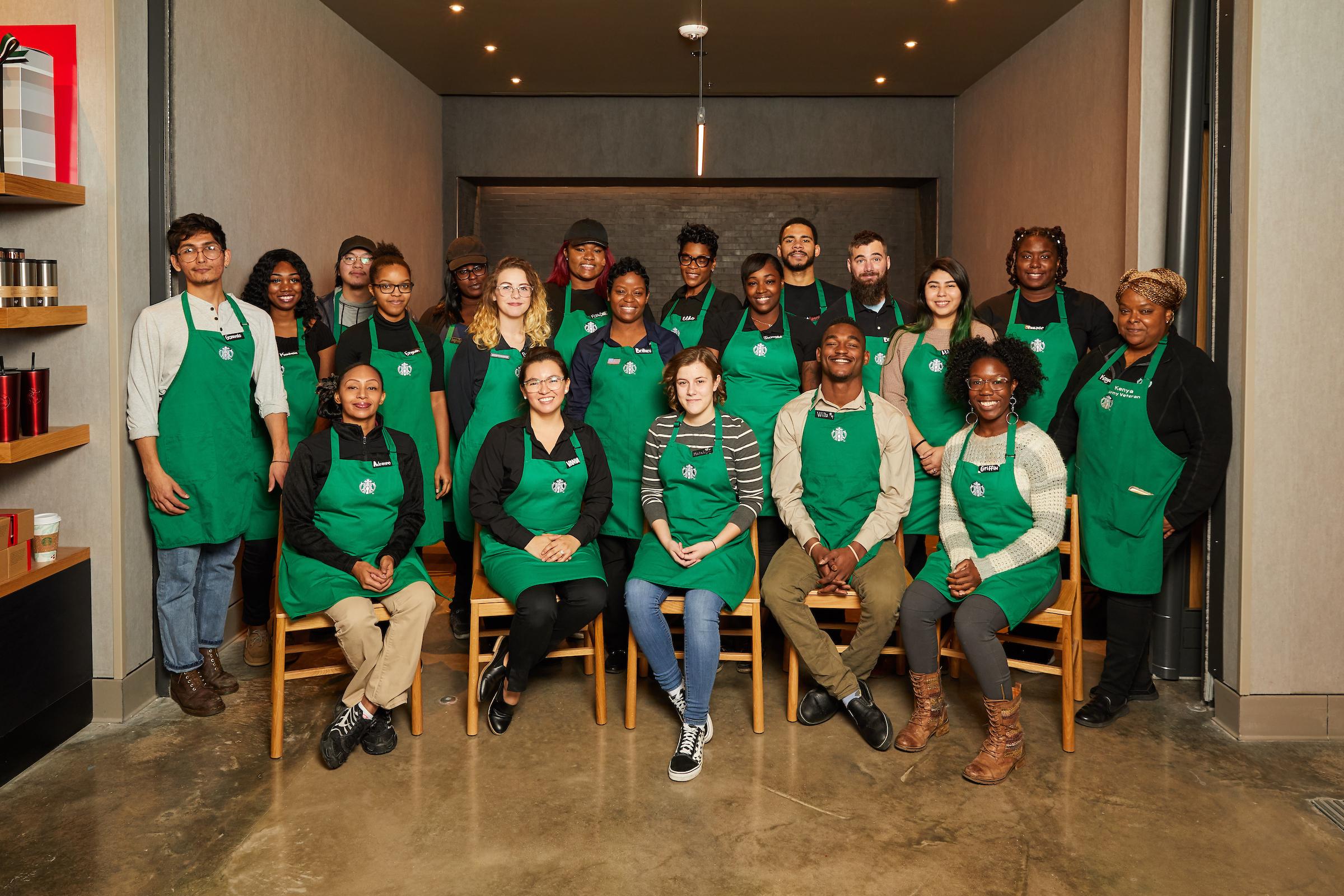 The Red Bird neighborhood of southern Dallas is starting to sing again, and Starbucks is ready to join the chorus. On Friday, the company opens its 12th Community Store near the RedBird Mall.

The mall, which opened in the ’70s, served as a hub of commerce and socializing for the neighborhood for decades. When Brittani Horton, assistant manager of the new Dallas Community Store, started work at Foot Locker in the mall in 2008, it was still a vibrant hangout.

“The mall was jumpin’,” Horton said. “Now, if you don’t know, the only thing that’s in RedBird Mall right now is shoe stores. So with Starbucks comin’, it’s gonna create a different type of environment. You got other stores that are lookin’ to come here now, just for the simple fact that Starbucks is here. So, I think it’s definitely gonna shake some things up in the community. It’s gonna create a lot more job opportunities, which we need here as well, and the RedBird Mall parking lot is not gonna be as empty anymore. It’s not called be called ‘Dead Bird’ no more.”

In June, the Dallas City Council voted unanimously to approve $22 million toward the redevelopment of the RedBird Mall. The city’s revamp will include a renovation of the existing mall in addition to retail, office and hotel space.

“We’re starting the snowball,” said Vania Perez, manager of the Dallas Community Store. “There’s so much development here, and it’s starting with us. Because we’re coming here, and we’re the type of brand we are, it’s a catalyst to get the place shaking again. It’s going to be really cool too to offer a place where people can have community, because it hasn’t been consistent.”

Community stores are part of a special Starbucks initiative to support youth and economic development in diverse, underserved areas of the country. Each community store seeks to hire from the neighborhood and partner with local women- and minority-owned businesses. Community stores also feature classroom space to provide in-store job training for young people ages 16 to 24 who aren’t in school or working. Through a grant from the Starbucks Foundation, the Dallas store will work with the non-profit Generation to provide a multi-week training program to 200 young people over the next two years. The company will also support existing programs aimed at helping connect young people with internships, apprenticeships and jobs.

Since announcing the Community Store initiative in 2015, Starbucks has opened similar community stores in Ferguson, Mo.; Englewood in Chicago’s Southside; East Baltimore; Miami Gardens; Bed-Stuy in Brooklyn, N.Y.; Birmingham, Ala.; and Seattle’s White Center, among other places. The company will open two others soon, in New Orleans and near Atlanta, with more coming over time.

As the new store opens in Dallas, meet five Starbucks partners who are excited about its potential and its role in helping to reinvigorate the neighborhood.

The Dallas Community Store’s fearless leader was born in Guatemala and moved to the United States when she was 10. “My family definitely had really humble beginnings. We’re very blessed to be here,” she said. She joined Starbucks as she was finishing her college degree.

“I didn’t plan on staying or becoming a store manager, but I fell in love,” she said. “There are all these opportunities for people to move up with the company and to connect with the community.”

Where did you grew up? Guatemala

How long have you been a Starbucks partner? Five years

What is your superpower? My superpower is definitely positivity. No matter what in the world happens, I can always see the good in it. So I think that’s gonna be what I bring to the table – that no matter what adversity we face, and they will come, I can always keep a good spirit and help my team come along and stay positive.

A seven-month Starbucks partner, the gregarious Horton looks forward to someday managing her own store. She is a Navy veteran and mother of two who came to Starbucks from the Foot Locker in the nearby RedBird Mall.

Where did you grow up? California

How long have you been a Starbucks partner? Seven months

What is your superpower? I think my biggest superpower is the fact that I’m relatable and I have so much passion. People have often told me that I have a presence and a light about me that nobody else has. I’m able to connect with my customers. I can spark a conversation with any and everybody. I can work for, and with, any and everybody. I love networking. I love meeting new people. So, I feel like my personality in itself is my superpower. The ability to make people laugh. The ability to just connect with people around current themes, current events, you know?

The eldest of seven children, Young is the son of Belizean and African-American parents. He’s been on his own since he was 16, but is also a source of support for his single mother. A former bartender, the amiable Young started work as a barista but has already been promoted to shift supervisor and looks forward to continuing his career journey with the company.

Where did you grow up? California

How long have you been a Starbucks partner? Three months

What is your superpower? I would say my superpower would definitely be people. Being a bartender, and I guess translating over to becoming a barista, the best part about it is just talking to people. And I’ve always said if I can get paid to talk to people all day, I would do it.

London, an aspiring language analyst who plans to start college in the spring, never imagined she’d work at a people-centric job. “Growing up I was always really awkward. I never really went out much. Now that I work at Starbucks, it’s really an opportunity to work on myself, but also to help people like me – people who suffer anxiety and awkwardness. It’s kind of like teamwork, in a way. You meet someone who might be like you or might not be like you, but you can build a relationship, no matter how small it is.”

Where did you grow up? Oklahoma

How long have you been a Starbucks partner? Two months

What is your superpower? My superpower would be to treat people the same way I would treat my family and to always see the good in people whatever kind of attitude they may have whether it’s positive or negative.

Williams, an aspiring musician and producer, grew up near the new Dallas Community Store and attends audio/video production classes at the local community college. He was hired at Starbucks through the Dallas Opportunity Fair in May and looks forward to being able to walk to work.

Where did you grow up? Texas

How long have you been a Starbucks partner? Nine months

What is your superpower? I bring energy. And I’m charismatic. I love music and I like to connect with my fans. I will give you energy! Even though I don’t drink coffee, it seems like I drink coffee with the way I act. I will make you love the environment.