Monique Brown spent 26 years in the military, half of them active duty, and more than two years in Iraq, cooking for the troops. When she transitioned to civilian life in 2013, says Brown, “it was rough.”

She suffered a breakdown. “I started crying one day and couldn’t stop,” said Brown, who is 50 and lives in Renton, Wash. “Your world stops because you have no mission. You are trying to figure out what comes next.”

Brown was diagnosed with post-traumatic stress, major depressive order and anxiety, which gave her names to validate what she was feeling. She knew that part of her recovery hinged on helping others, so she found a job doing veterans outreach, connecting homeless vets she found beneath the freeway or in squalid tent cities with services. Slowly she emerged from the fog. Then one day last year, she united with Victor Melendez, who designs coffee packaging for Starbucks, to turn her painstaking process of healing into art.

“It was so impressive how Victor took my words and came up with a design to encapsulate them,” said Brown of the image that Melendez sketched. The open palm symbolizes Brown’s desire to help veterans in need; the dynamic river springing from a heart in the center of the hand embodies her journey.

That design is one of five that will grace apparel and accessories for sale beginning Sept. 12 at the Starbucks Reserve Roastery, part of the “Handpicked at the Roastery” featured offerings available in the pop-in window. 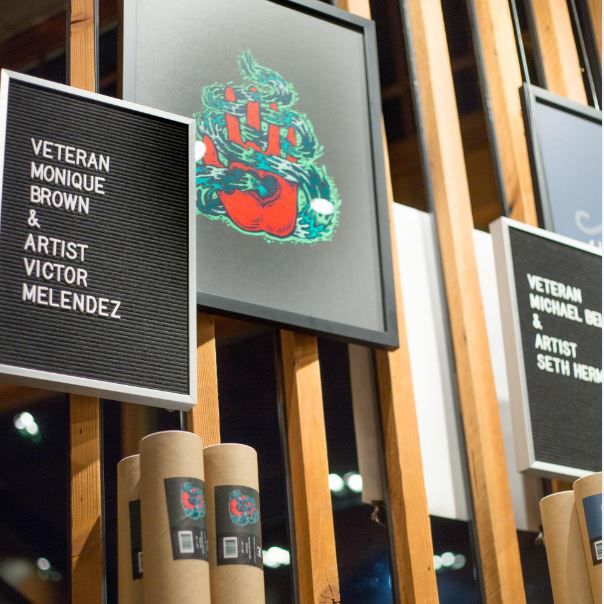 The organization behind the project, HAS HEART, pairs veterans with artists to translate their stories into creative expressions. To begin, veterans and artists engage in an intense getting-to-know-you session. The veterans share their experiences, both proud and painful, which the artists then turn into images to be replicated on apparel and goods. The final product is a collection of t-shirts, sweatshirts, patches, bags and hats. Starbucks licensed the right to use the designs created by HAS HEART, which routes the proceeds to the veteran behind the design and HAS HEART’s “50 States: Veterans + Artists United” tour that aims to matchmake between an artist and a veteran in all 50 U.S. states by the end of 2018.

The partnership builds on Starbucks’ commitment to veterans. In 2013, Starbucks announced its goal of hiring 10,000 veterans and military spouses by 2018. The company met that goal ahead of schedule and boosted its commitment to 25,000 hires by 2025.

Inspired by an Art Festival

HAS HEART traces its beginnings to 2011, when Navy veteran and co-founder Michael Hyacinthe got word that his wife’s cousin had been killed while deployed in Afghanistan. Around the same time, Hyacinthe attended a vibrant art festival in Grand Rapids, Mich., where he was in school. He was struck by how he felt comforted by the objects of beauty and creativity even amid his sorrow. That gave him an idea: Perhaps he could expose wounded veterans to the healing aspects of art.

Hyacinthe teamed up with graphic artist Tyler Way, and they launched their first project, creating patriotic designs on t-shirts to sell at local fairs. At one event, they came across a wounded Marine veteran who was left quadriplegic. The vet said that he wanted to design t-shirts, and a concept was born. “Instead of us designing them,” said Hyacinthe, “we thought, ‘Can we inspire and empower wounded vets to tell their stories through design?’” 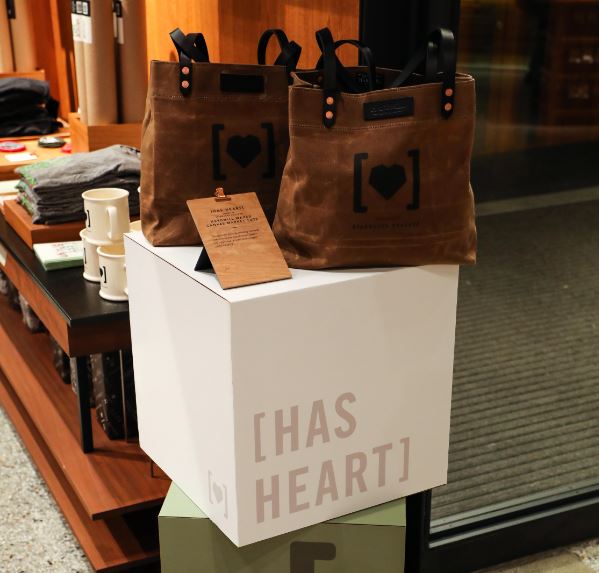 That notion led to the format that couples a veteran with an artist. Since 2012, HAS HEART has brought five wounded veterans annually to Grand Rapids, where they’ve brainstormed designs, collaborated and created. But for the next year and a half, HAS HEART is taking the show on the road. Way and his wife, Kendra Clapp Olguín, are traveling through the country in their Airstream trailer, connecting with veterans and artists along the way. So far, they’ve visited Vermont, Maine, New Hampshire, Rhode Island, Massachusetts and Pennsylvania.

“This project impacts people in so many different ways,” said Clapp Olguín, HAS HEART’s content creator and the daughter of a Vietnam Navy veteran.  “The veterans come in and have a whole new perspective on their experience. The creatives come in and understand the sacrifices these veterans have made. When you share that with the civilian public, it raises awareness.”

In 2015, the Schultz Family Foundation and Starbucks organized a day-long conference called The Muster that brought together veterans service organizations, military representatives and business leaders to discuss the transition from the Armed Forces to civilian careers. HAS HEART was invited to participate, after which the Foundation sponsored the organization to work with two veterans, one in Portland and one — Monique Brown — in Seattle. 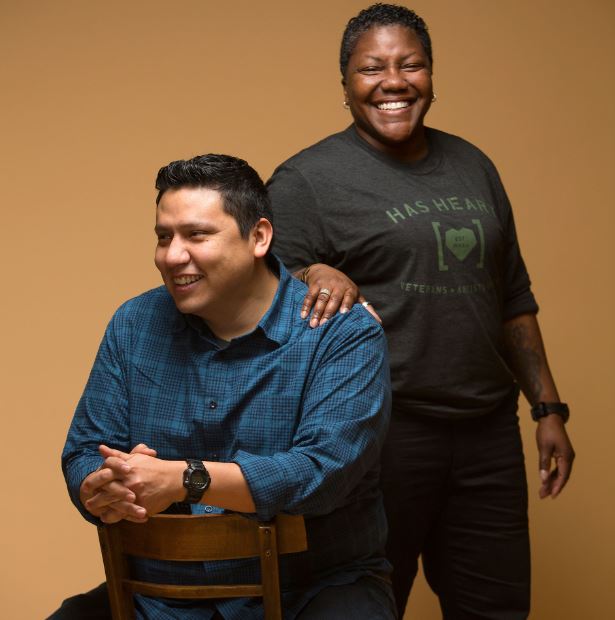 It was Way who reached out to Melendez to see if he’d be interested in partnering with Brown to make sense of her experiences through art. Melendez and Brown met at Touch Worldwide, an ad agency in downtown Seattle, where she told him about her struggles. Melendez listened carefully, wondering how best to represent her story in pictures. “I started writing down ideas for words that came up while she was telling her story,” said Melendez, who is a nine-year partner. He scribbled “family,” “healing” and “faith,” then started sketching ideas and brainstorming with Brown, writing the touchstone words on a large white board.

“We discussed trying to represent the journey of her healing so I tried to show a hand representing help with a heart representing love,” said Melendez. “I drew this organic water shape to represent a journey and resemble a river. Parts of those became the final sketch.”

Several weeks later, Brown came to the Starbucks Support Center – Starbucks headquarters in Seattle – where Melendez works, to see his final design, which she calls “amazing.”

“The whole experience was very emotional,” he said. “These people give their lives for the country and it’s something I have never related to. Once you get close to that world, you realize how that experience impacts so many people.”

The collection will be available at the Roastery until holiday merchandise goes on sale early November. 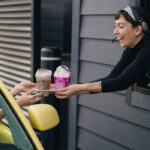