Kalif Sanogo (pictured below) made a promise to everyone he encountered when he entered the YMCA of Greater New York’s Y Roads program: “I’m going to be your favorite.” 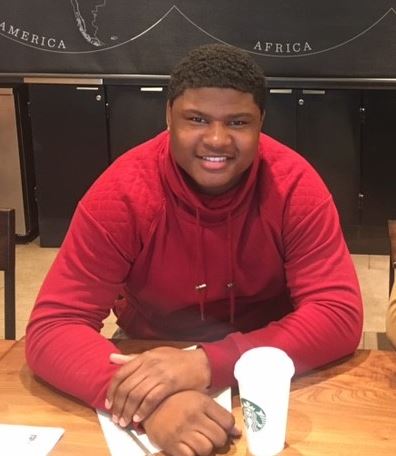 According to Y Roads Center Director Clare Dwyer, the 19-year-old Bronx resident has kept his promise.

“He’s a well-rounded young person,” said Dwyer, citing his achievements as a student, leader and mentor. “He’s so engaged and, I know it sounds cheesy, but he just lights up every space he’s in.”

Of late, that space has included the Starbucks located at the intersection of Sutphin Boulevard and 89th Avenue in the Jamaica neighborhood of Queens, New York. There he’s been a participant in Y Roads, a YMCA program operated in partnership with Opportunities for a Better Tomorrow, a workforce development agency that connects youth who are out of school and out of work to job training opportunities, academic support and counseling. Y Roads and another nonprofit for youth, Queens Community House, conduct classes in an onsite training space designed for organizations that help prepare young people for the working world.

The Jamaica, Queens, store opened one year ago (March 8) and is one of at least 15 Starbucks® stores that are opening as part of the company’s effort to support economic development and social change in diverse low- to medium-income communities. Much like Starbucks stores in Ferguson, Missouri, and Englewood in Chicago’s Southside, the onsite training space is a key feature of the store.

For Sanogo, Y Roads and the Jamaica, Queens, Starbucks represent a turning point in his life. An aspiring football player since he was 10, Sanogo encountered trouble in high school and his family was forced to move for safety reasons. He joined Y Roads in 2015 to get his High School Equivalency diploma. Guarded at first, he became more committed to the program after attending a New York YMCA camp in upstate New York.

“I felt at home,” he recalled. “I saw how everybody was so different and nobody was judging. It was a great experience and from that day I just fell in love with the YMCA.”

At Starbucks, Sanogo is learning about customer service. He’s interested in sports and fitness and pictures himself becoming a social worker and interacting with young adults through the YMCA.

“We feel customer service suits all angles of what he wants to do,” said Dwyer.

Sanogo plans to continue his education. He’s applied to Springfield College, a longstanding YMCA partner institution located in Massachusetts. Seattle University is also high on his list. He’s motivated to push ahead by his own favorite person – his 15-year-old brother Ibrahim.

“When I look at him, I see myself at a younger age,” Sanogo said. “He’s the reason I got my diploma and he’s the reason I want to go to college. I don’t want him to go through what I went through. I want him to have a great high school experience, go straight to college and do the best he can.”

Alisha Wrencher, the manager of the Jamaica, Queens, Starbucks since its opening and a lifelong member of the community, has seen the impact the store has had on individuals like Sanogo, and on the neighborhood it serves. From the beginning, Wrencher and her team have hit their sales targets, managed high partner engagement and retention, and focused on partner development resulting in promotions within the team. Additionally, they thrive in the daily connections they make with their customers, living up to a pledge they made on opening day to be the “Dream Team.”

Game nights have been organized to give young people a safe place to socialize and it’s become a welcoming place where students can study while they wait for their parents after school. Coffee with a Cop gatherings have been hosted to break down barriers between local police and the people they serve. At Thanksgiving, partners (employees) walked the streets and fed the homeless. And last September, Starbucks chairman and ceo Howard Schultz visited with Grammy- and Academy Award-winning performer Common to call attention to the company’s ongoing commitment to communities that have large opportunity gaps and a need for business engagement and investment.

“The first year was very impactful,” said Wrencher, a 19-year Starbucks partner. “There are different aspects to this community. You can walk a few blocks over and you’ll see the challenges. But this store has become a center where there’s peace and unity.”