On the first day of classes for the Starbucks Retail Inclusion Academy, Pepe Dent was feeling so apprehensive that he texted his mother, telling her, “I don’t think I can do this.”

“I’m just anxious about meeting people,” said Dent, who has Asperger’s and ADHD. “I’m very anxious in a setting like that, especially in an area where I was with a whole bunch of people I didn’t know.”

The 20-year-old Baltimore native was one of six enrollees in a program launched in April to provide retail training for individuals with disabilities. Planning for the academy began in 2016 when Jessica Hawes of the Maryland Division of Rehabilitation Services (DORS) began pondering how successful on-the-job inclusion programs in warehousing and distribution at Starbucks facilities in Carson Valley, Nev., and York, Penn., could be adapted to the retail sector.

“When we have done research into the areas that are offering career growth, the retail and barista fields were rapidly expanding, and still are,” Hawes said. “I had this broader idea: How can we do this with other vocational rehabilitation agencies? If we create a good model, can’t other states use the same model?”

Hawes reached out to Starbucks district manager Aaron Thompson and a team with members from Starbucks and DORS began laying the groundwork for a six-week curriculum that would integrate classroom instruction at the Work Force Technology Center in Baltimore with barista training at the recently opened Starbucks community store at 1812 Ashland Ave., in Baltimore.

DORS prescreened candidates, reaching out to field counselors to find people with disabilities who they believed would flourish in an environment like a Starbucks store. Eventually, five men and one woman were brought aboard.

Coming out of their shells

From Hawes’ perspective, the first classroom meeting, which was attended by Thompson and others from Starbucks, was a little concerning. Dent wasn’t the only student who was inhibited; initially, they all were.

“This was all new to them,” she said. “They’re all under 25. For them to interact with someone on Aaron’s level in the business world…none of them had had that experience.”

Denise Jameson, another Starbucks district manager involved in creating the program, also detected the participants’ initial apprehension, but as she continued to check in with the group week after week, she witnessed growing confidence across the board. When Jameson took questions about company culture, a planned one-hour question-and-answer session stretched to two and a half hours. A tight bond formed among the students. Dent became “a walking encyclopedia,” she said, and two other particularly reserved students began to come out of their shells and take on leadership roles.

After six weeks, including two working out of a training space reserved for nonprofits at the 1812 Ashland Starbucks in Baltimore, they gathered together one last time as classmates with many of their teachers and mentors present.

“It was a really emotional day,” Hawes recalled, holding back tears. “A lot of the students had gone through some really tough times. They talked about how supportive everybody was, and what they would have done if they weren’t in this program and more tough times came up in their lives.”

Thompson, who was also at the gathering, said the first Starbucks Retail Inclusion Academy class points a way forward. DORS is already on the lookout for candidates to attend the second round, which launches August 22.

“We took the time to plan this right,” said Thompson. “We know that it will be sustainable and we’ll be able to replicate this. District manager Kandace Huntsman in Nevada, who worked with us in the planning for this project, is planning to implement a similar program in partnership with the Carson Valley roasting plant in the coming months. The greatest thing about this is to be able to see these individuals and how they grew through the program. Once they got through those six weeks, you could see their personalities.”

The five graduates have all applied with Starbucks. Dent, who “didn’t have much of a work history” prior to enrolling in the academy, begins work next week at a Starbucks in Annapolis, Md. He plans to enroll at Arizona State University through the Starbucks College Achievement Plan, which offers full tuition coverage to earn a bachelor’s degree. He’s interested in studying psychology.

“I’m happy, and I’m a little bit nervous,” Dent admitted as he thought ahead to his first day on the job. “It’s a new place and I’m meeting new people. But I’m sure it’ll go well.” 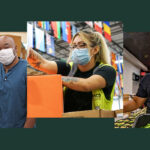 You voted, we gave: The Starbucks Foundation donates $1 million to help strengthen communities

Get the recipe that inspired Starbucks new iced holiday drink

Hear the story behind Starbucks new Iced Sugar Cookie Almondmilk Latte and learn how to make your own spritz cookies at home.

Join us as we celebrate alongside our indigenous partners (employees) as they share stories about identity, culture and tradition.