The son of a U.S. Air Force veteran and grandson of a U.S. Navy veteran, Mike Campbell grew up knowing he would someday enlist in the armed forces. In 2004, he chose the Navy. After 10 years of honorable service, a lengthy nine-month deployment made him realize he wasn’t prepared to be separated from his family for long periods.

“I figured that if I went in for another 10 years to retire, I would miss so much,” he said. “My children would be 18 and 16 when I separated, so I decided it was time to move on.”

Campbell left the service confident his service and training would open doors in the civilian world. Instead, with no income, the family of four stayed with family and friends for short stints while they struggled to find their footing.

“We were pretty much homeless,” he said. “I had lost all of the structure of the military and essentially the job that I was really good at I had left behind.

“Starbucks came in and said, ‘We want to hire you. We value your skills.’ They gave me an opportunity and we were able to get our own place to live. I was in a very bad place at the time and I would definitely say that Starbucks saved my life.” Campbell became one of the 10,000 veterans Starbucks committed to hiring in 2013 – a goal the company has reached a year early, the company announced today.

Creating opportunity through hiring programs is in Starbucks DNA. With 330,000 people who wear the green apron worldwide, the company is in a unique position to make a difference in its communities through focused training and employment programs. These initiatives include the commitment to hiring veterans and family members and opening stores near military bases; the opening of 15 stores in underserved U.S. communities that serve as training centers for Opportunity Youth; and the hiring of 10,000 refugees globally.

Campbell remembers where he was the first time he heard a reference to Starbucks® Military Family Stores. As a new Starbucks hire, the Navy veteran was seated with a group of company managers engaged in a discussion of store operations, when talk turned to a store that would be opened soon outside the west gate of Hill Air Force Base in Clearfield, Utah.

“I didn’t even know Military Family Stores were a thing,” Campbell recalled.

At the time, they weren’t. Starbucks had just unveiled a plan to open 30 stores at major military bases that would be staffed largely by veterans and military spouses. The stores would function as hubs within their communities and help to ensure smooth transitions back into the civilian world for U.S. service members. The first Starbucks Military Family Store was dedicated near Oceanside, Calif.’s Camp Pendleton in February 2015, right around the time Campbell learned about the planned Hill Air Force Base store.

“My ears perked up and I thought, that’d be perfect for me,” said the 31-year-old Georgia native, who completed his Navy service in September 2014. “Then they accidently showed a slide that showed I was going to manage the store. They were like, ‘Oh, well, I guess the cat’s out of the bag. Yup, that’s where you’re going.’”

Campbell has been managing the store 11 miles south of Ogden, Utah, since it opened on May 20, 2015. Today, Starbucks re-upped the veterans hiring goal to 25,000 total hires by 2025. Meanwhile, the company dedicated its 32nd Military Family Store in Lakewood, Wash., this week and has announced plans to launch 100 more across the U.S. in the next five years. 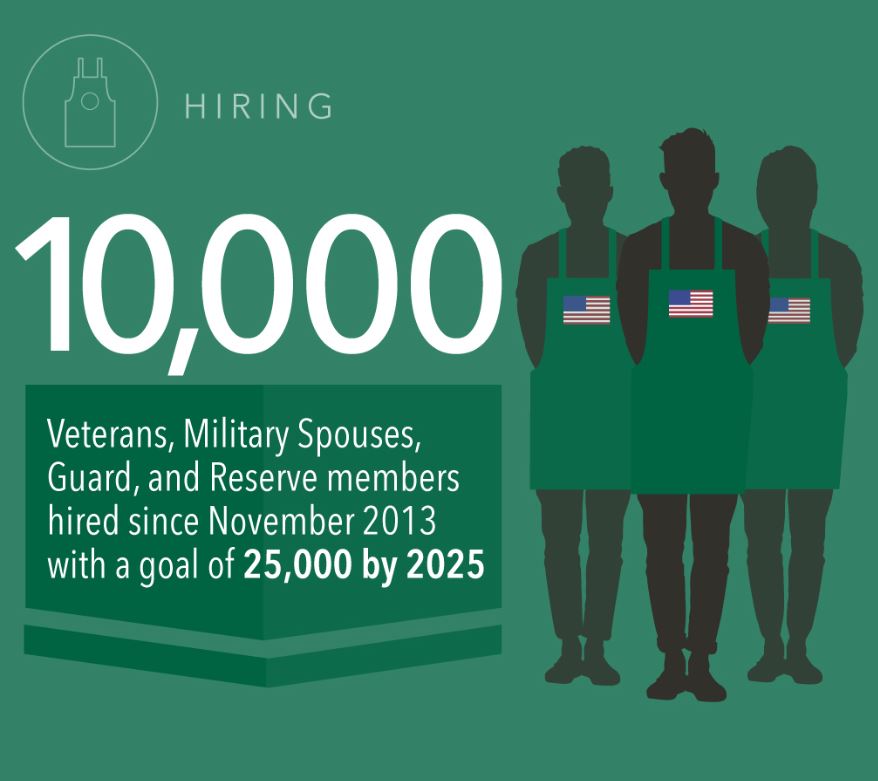 The Military Family Store Campbell manages is staffed by an assortment of veterans, military spouses, reservists and offspring of retired and active-duty service members. Uniformed customers mix with civil service base employees and other civilians. They comment on military-themed artwork on the store’s wall and the flag-adorned aprons the partners wear in recognition of service as veterans and military spouses. Customers as well as partners participate in RED Fridays, when they wear red clothing to Remember Everyone Deployed.

“One of my favorite things to tell partners is to find something you love to do,” he said. “You want to find a job that you don’t look at as a job. I’ve definitely found that.”

A continuing commitment to Opportunity Youth

As with its veterans hiring goal, Starbucks has passed its target of hiring 10,000 Opportunity Youth ahead of schedule. Opportunity Youth are defined as 16- to 24-year-olds who aren’t working or going to school. The initiative, announced in 2015 with a 2018 deadline, has already reached 40,000 hires, prompting Starbucks to expand its goal to 100,000 hires by 2020.

Cordell Lewis manages the store in Ferguson, Mo., that kicked off a 2015 Starbucks initiative to create jobs, provide training and revitalize communities. Lewis said the impact of the effort is being felt in his community, which was scarred by vandalism and arson after the fatal shooting by a policeman of unarmed black teenager Michael Brown in 2014. Lewis said that two partners have been promoted to assistant store managers at the Ferguson store and another four have been elevated to shift supervisors out of the 23-person team he began working with 11 months ago.

“The partners are thriving in a Starbucks environment,” Lewis said, adding that Ferguson has embraced the store, which has provided a model for similar Starbucks opened in Baltimore, Phoenix; the Jamaica neighborhood of Queens, New York; and Chicago’s Englewood neighborhood. Starbucks plans to open similar stores in 10 additional communities.

“When we first opened, there were a few customers who were hesitant and didn’t understand the purpose of Starbucks coming here, but we tried to address everyone who came in and had questions,” Lewis said. “A lot of that has come down to conversations one on one to explain why we want to support the community.

Starbucks helped create the nation’s largest employer-led coalition committed to supporting Opportunity Youth as they prepare for and secure employment. The 100,000 Opportunities Initiative, formed in July 2015, met its original 100,000 hiring target in August 2016 and has set a new target of one million opportunities by 2021.

In January 2017, Starbucks also committed to hiring 10,000 refugees around the globe by 2022, starting with interpreters and others who have worked with United States armed forces. The company has formed an advisory relationship with the United Nations High Commission for Refugees. As part of the effort, Starbucks is partnering globally with the International Rescue Committee and the Tent Foundation. In the United States, the company is allied with No One Left Behind, an organization that assists American military allies who served alongside American armed forces.

No One Left Behind was cofounded by Matthew Zeller, a former member of the U.S. Army Reserve whose life was saved by Janis Shinwari, an Afghan translator he served alongside. Zeller said getting Shinwari and his family to safety in the United States inspired him to resettle others like him, far from those who would exact revenge on them for serving U.S. interests.

“This is a never-again moment,” Zeller said. “If we don’t do something, there’s going to be terrible death and suffering. Maybe even a genocide. And we’re all going to look back and say, ‘I wish to God we had done something.’ All we need to do to prevent something is have the courage and conviction to do the right thing. That’s what Starbucks is doing. Good people can do good things if they organize and commit themselves.”

Natesh Rao, a member of the Starbucks Global Social Impact department and a 20-year U.S. Navy veteran, praised the organization for working on behalf of interpreters, personnel and family that have worked alongside U.S. forces.

“No One Left Behind is about creating opportunities,” Rao said. “This aligns with what we try to do at Starbucks.

“We expect that this partnership will result in meaningful careers for these ‘veterans’ and their families, not just at Starbucks, but across the coalition of companies we partner with.”