SEATTLE (July 13, 2017) – A little more than a year after its debut in the Starbucks Reserve Roastery in Seattle, Starbucks customers can now find Starbucks Draft Nitro Cold Brew in nearly 1,000 company-operated stores across the United States. The product has also expanded globally into 16 markets around the world, with Colombia being the latest to offer Nitro Cold Brew, starting today. Starbucks Nitro Cold Brew is expected to be available in nearly 1,500 stores in 26 markets by the end of 2017.

“The category of cold coffee is heating up,” said Sandy Stark, senior vice president, Starbucks U.S. Beverage Category and Global Innovation. “We have always offered iced options but the launch of our cold brew platform in 2015 was a catalyst for our ability to bring in new options like Nitro. As a result, we are seeing less seasonality with cold coffee as it becomes a year-round drink for our customers.”

When it comes to making Nitro Cold Brew available to all customers, Starbucks is looking beyond the four walls of its stores. The Starbucks Cold Brew bike, which rolled out earlier this year, allows licensed partners – such as those located on retail or college campuses – to bring Nitro to customers in a new and unexpected way. The Starbucks Cold Brew bike, a two-tap system on wheels, holds 2-4 kegs and serves Cold Brew coffee on-demand as an extension of a licensed store. There are currently two in operation with an additional eight more expected to follow later this year.

The installation of Starbucks Draft taps in stores has paved the way for Starbucks to continue innovating and testing new products. Later this summer, Starbucks will test the expansion of the Starbucks Draft platform through two new beverages: Nitro Flat White and Nitro Peach Tea. These beverages will be offered in 30 stores for a limited time, alongside Nitro Cold Brew and classic Cold Brew, also available fresh on tap. 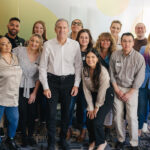