When Keshia Thomas looks at the neighborhood surrounding the new Starbucks she manages in East Baltimore, she sees what she calls “rough patches.” There are few places to shop other than a couple of corner stores. It’s an area associated with low-income housing and a shortage of economic and educational opportunities.

Thomas grew up in West Baltimore, where she saw the same kind of challenges the community around the Ashland store confronts.  She has lived and worked in the city throughout her life, and also sees something else surrounding the store (opening Friday, March 17) at 1812 Ashland Avenue: promise. 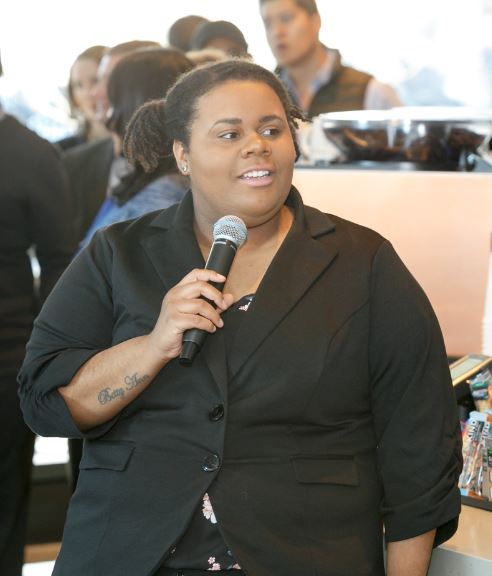 The Dunbar-Broadway neighborhood near the Johns Hopkins Medical Institutions campus is the site of a revitalization project that will include 2,100 units of mixed-income housing. The Ashland Avenue Starbucks is in the Science + Technology Park at Johns Hopkins, a more than one-million-square-foot corporate research campus completed last summer. The office, lab and retail spaces on the campus, as well as new housing, are transforming the area. Thomas hopes the new Starbucks store can provide a point of connection between longtime residents and newcomers to the neighborhood.

“I’m very excited that Starbucks has decided to open here,” said Thomas, who was managing a store in the Canton neighborhood east of downtown Baltimore before she was selected to take on management of the new store. “I think Starbucks brings hope to the whole community and it can bridge the old and the new.”

The 1812 Ashland Avenue store is the fifth opened as part of a national initiative launched in 2015 to bring Starbucks stores to 15 diverse low- to medium-income communities by 2018. Similar stores designed to create job opportunities for youth and support economic development have opened in Ferguson, Missouri; Phoenix; the Jamaica neighborhood of Queens, New York; and Chicago’s Englewood neighborhood. Others will open in Birmingham, Alabama; Long Beach, California; Miami and Seattle later this year.

These stores aim to strengthen local economies by creating jobs, working with minority-owned businesses and providing job training spaces for nonprofits to engage with local youth. The Ashland Avenue store was built by a local minority-owned contractor, the Commercial Construction Group, and will serve Midnite Cupcakes, which are supplied by a local business, Midnite Confection’s Cupcakery, owned by entrepreneur Sandra McNeil.

“Commercial Construction has enjoyed a very successful partnership with Starbucks and their talented team,” said Kevin Johnson, chief executive officer of Commercial Construction. “Our companies share a corporate culture to enhance the human experience by nurturing and inspiring people. We strive for excellence in providing the highest quality product and customer service.”

The store employs 17 people, including two who have come through The Choice Program, an initiative of the University of Maryland Baltimore County, which will offer instruction, professional experience and opportunities for personal and career development to local youth in the store’s onsite training space.

A commitment to Baltimore’s young people

In Baltimore, one in five young people are not working or in school. Baltimore has one of the nation’s highest percentages of opportunity youth (youth between 16-24 who are disconnected from school and work). Nationally it’s estimated that 5.4 million, or one in seven, young people fall into the opportunity youth category. In addition to opening stores in 15 communities to help create pathways to success for these individuals, Starbucks helped create the 100,000 Opportunities Initiative, the nation’s largest employer-led coalition committed to supporting opportunity youth as they prepare for and secure employment. The coalition, formed in July 2015, met its original 100,000 hiring target in August 2016 and has set a new target of one million opportunities by 2021.

Starbucks efforts in East Baltimore have been hailed by local leaders as an important step in revitalizing and reenergizing the community.

“This is just what we need in Baltimore and I am proud to work with Starbucks as we create a new model for economic growth that provides a positive impact on the lives of residents who live in the surrounding communities,” said Mayor Catherine E. Pugh. “We’re also fortunate to have anchor institutions and community partners such as Johns Hopkins University and Health Systems, East Baltimore Development Inc. and Forest City – New East Baltimore Partnership who support and believe in this vision.”

“I welcome Starbucks into the neighborhood, and I applaud them for working with local minority-owned contractors while opening this new location,” said U.S. Representative Elijah Cummings of Maryland’s 7th District. “I am looking forward to Starbucks leading by example with their commitment to training, developing and employing Baltimore’s young people.”