As Amit Bhatia slipped his hand around the small, triangular-shaped rock, he began to shake. In the rock, brought back from Auschwitz concentration camp by Starbucks executive chairman Howard Schultz 17 years ago, he felt the weight of the past, and also his fears for the future.

“That rock represented the blood of millions who fell victim to something very similar to what we are facing now,” he said quietly.

On Tuesday, Bhatia was part of the standing-room only crowd at the Starbucks Support Center in Seattle, attending a forum titled “Hate has no home here,” called by Schultz to address the violence, hatred and empowerment of white supremacists and neo-Nazis in recent days. Schultz brought the touchstone for partners to pass around the room, as a tangible reminder of unchecked hate.

“I come to you as an American, as a Jew, as a parent, as a grandparent, as an almost 40-year partner of this company,” Schultz said as he opened the forum. “I come to you with profound, profound concern about the lack of character, morality, humanity and what this might mean for young children and young generations that are growing up at a time in which we are imprinting them with levels of behaviors and conduct that are beneath the United States of America,” he told the crowd of more than 500 in the room, with more than 1,000 in overflow areas.

“I know we are better than this,” Schultz said, pausing to regain his composure.

Schultz said he’d let the actions and words of President Donald Trump speak for themselves but added,

“What we witnessed this past weekend…is against every sense of what is right. My fear is not only that this behavior is being given permission and license, but its conduct is being normalized to the point where people are no longer hiding their face. We’ve all seen pictures of the KKK in the South … they were hiding because they were afraid to be outed. People are no longer afraid.

“The moral fiber, the values, and what we as a country have stood for is literally hanging in the abyss. We are at a critical juncture in American history. That is not an exaggeration. We are at and facing a crucible in which our daily life is being challenged and being questioned about what is right and what is wrong.”

For the next hour and a half, as the rock circulated around the room, Schultz shared his thoughts, followed by Starbucks partners taking the microphone to ask questions and share their feelings. 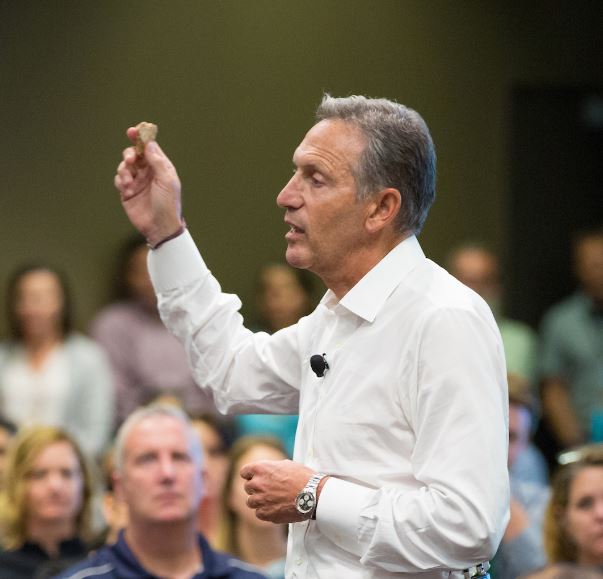 Bhatia, who moved to the United States from India 15 years ago, said that lately he and his wife have had a hard time explaining to their 13-year-old daughter, Ayla, why they chose this country. “But just the fact that we are having this discussion here gives me hope,” he told Schultz.

Partner forums are a tradition at Starbucks. Schultz and Kevin Johnson, Starbucks chief executive officer, hold them quarterly at the company’s headquarters and regularly in regions around the world. Three years ago, a similar forum was focused on the topic of race and what partners and the company could do to bring people together.

During Tuesday’s forum, some rose to talk about their feelings of helplessness and pain. A Muslim man spoke of his home being vandalized. Others called for action.

“As an African American, it creates this feeling of going backwards, of literally blood, sweat and tears going down the drain,” said Carl Edwards, who works in Starbucks research and development department. “But If we look around, we have the brain power to solve anything. There’s nothing we cannot do if we put our minds to it. We can solve this. Let’s figure this out. Because we can do it.”

Schultz encouraged those in the room to look for ways to work toward change and to bring people together, and promised the company would as well.

“I can assure you, as we always have, as a company, as an organization, that our culture and values and guiding principles will hold true,” he said. “We need the belief and the faith in the country and the American people. It is hard in the midst of such a storm to maintain an optimistic view. But I raise my hand, and I say I am optimistic about our country and the true promise of America.”

Bhatia, who only began working at Starbucks three days ago, said that when he moved to the United States when he was 28, he barely spoke English, but wanted to come because he saw that people of all colors, races and religions were living together. “I knew this was the place to be,” he said.

His daughter recently told her father that she was worried they’d be sent back to India or that something would happen to them. But gatherings of people wanting to find ways to combat hate give him faith, he said. “What we’ve witnessed in the last few days is not the only America,” he said. As he looked around the room, he added, “this is also America. And this what will give us hope and the courage to move forward.”

Heidi Peiper contributed to this report.