It took Starbucks designer Jeremiah Bailey and his team more than a year to bring the space to life, and now in Santiago, Chile’s vibrant culture is on display at the first Starbucks Reserve® bar in Latin America.

“When designing, we try to uncover unique elements and ideas about a place through our research,” Bailey said. “We can’t be overt about it – we have to find a way to be respectful and humble about learning different cultures and then finding ways to represent them in our designs.”

“We knew that local materials would infuse the space with the DNA of Santiago to make the store feel like home.”

The new store, located in the El Golf neighborhood, features an interactive coffee bar that highlights rare, small-lot Starbucks Reserve coffees from around the world. Baristas are all certified Coffee Masters who handcraft beverages using a variety of state-of-the-art brewing techniques like siphon, Black Eagle manual espresso machines and Nitro Draft Cold Brew taps to bring out the coffees’ flavors. Customers can enjoy the classic Starbucks menu in addition to specialty beverages inspired by the Starbucks Reserve Roastery in Seattle including Sparkling Espresso with Mint and Nitro Cold Brew with Sweet Vanilla Cream. Starbucks® stores with Reserve coffee bars will make up 20 percent of the company’s global store portfolio over time.

Bringing the history of Chile to life through art 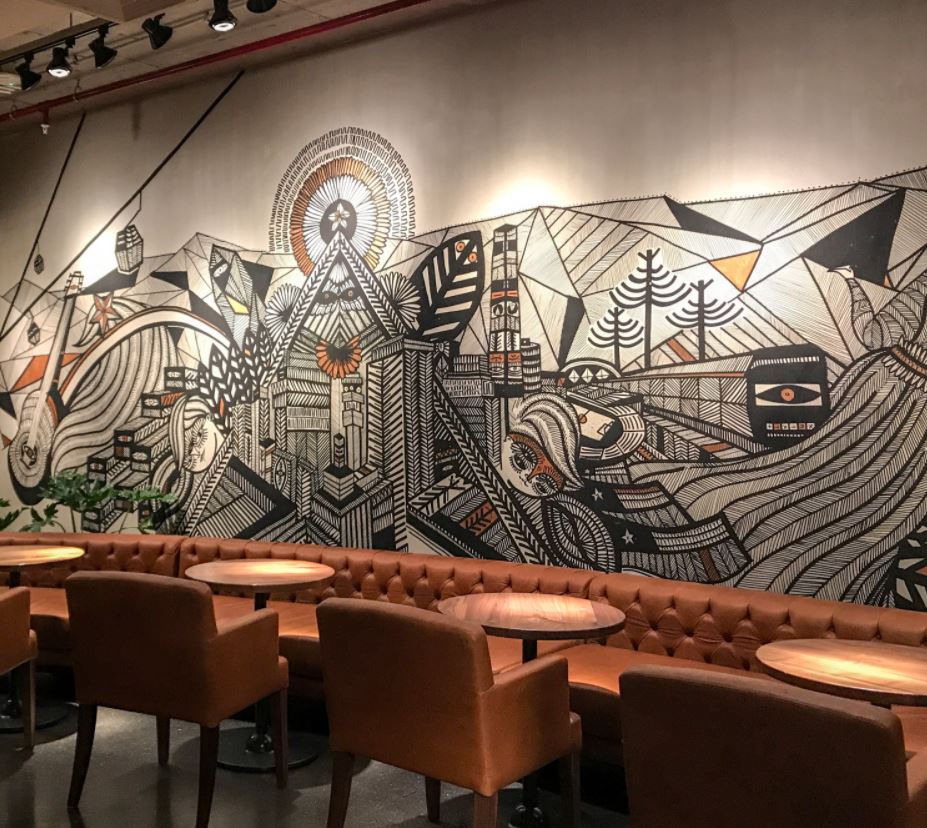 The mural, on a massive concrete wall 30 feet wide by 13 feet tall, is a focal point in the café. Bailey found the work of Nicolas Arroyo online and knew right away that his artistic style could tell Chile’s story.

“There is a distinct graphic quality in Santiago seen particularly with street art,” he said. “Nicolas uses this same style, which features bold, thick lines. I had a strong sense that his work would resonate with customers.”

Arroyo grew up in Santiago, the only child of a classical guitarist and nurse, which meant he spent a lot of time alone. He marked his home with drawings on furniture, on walls and in cabinets, which was a segue into graffiti art, which he mastered as a teenager.

Today, Arroyo owns Bespoke, a strategic and foresight design firm in Copenhagen, Denmark, and continues to create fine art, which he displays on social media and in galleries.

“I liked the concept of the mural right away and loved that it was in my hometown of Santiago. I knew that I could represent the history of Chile and many of the cultural norms and behaviors that only those who have lived in the city would know,” Arroyo said. “I now live in a country that is not my own, so when I come home to Santiago, I notice all of the changes in the city. I have an old image of the city, but I also see new things that helped me create a visual collage.”

Arroyo sketched the mural before transferring his work, using Posca markers from Japan for the outline and metallic copper paint to introduce color.

“Given that Starbucks is an international brand, it’s important that the company’s stores have a sense of something local to provide that local context,” Arroyo said. “When you live in a place, you sometimes take it for granted. Santiago is a wonderful city. It’s beautiful and I hope the mural helps remind Chileans just how beautiful it really is.”

“Ultimately, the store is for the customers, but it’s also for the partners,” Bailey said, referring to Starbucks employees in the store. “It was so wonderful to watch partners look around the space for the first time and see their eyes light up. It’s now their new home and they have the chance to bring it to life.” 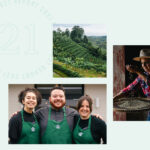