Growing up in Queens, Alisha Wrencher’s mom cautioned her to stay away from certain parts of the New York borough. Some areas weren’t safe. Others were even worse.

Queens is where music legends Louis Armstrong and Miles Davis once lived. A diverse community – predominantly African-American, Middle Eastern, Caribbean and Hispanic – it’s made up of middle-class homes, some housing projects, and small apartment buildings that blend in with mom-and-pop shops. New construction projects are starting to fill in the landscape too. More businesses and restaurants have opened in the past few years as the community works to overcome its reputation from decades ago. At the height of the drug epidemic, in the early 1990s, Queens was the king of crime.

While she acknowledges Jamaica, Queens – the area she was born, raised and still lives today – has the same troubles as any major city, Wrencher prefers to focus on the positive impact she can have on the community. For her, that means connecting with the neighborhood as the manager of the first Starbucks store in Jamaica.

The Starbucks location, on the corner of Sutphin Boulevard and 89th Avenue, is one of many Starbucks® stores that will open as part of the company’s effort to support economic development and social change in at least 15 diverse, low- to medium-income communities. Each store includes an onsite classroom space available to local nonprofit organizations working to provide job training and skills building programs for young people in the area.

“The community continues to change in many ways,” she said. “I think Starbucks investment and involvement in Jamaica, Queens will lead to even more growth over the next few years and more opportunities for young people.”

‘The dream is real’ 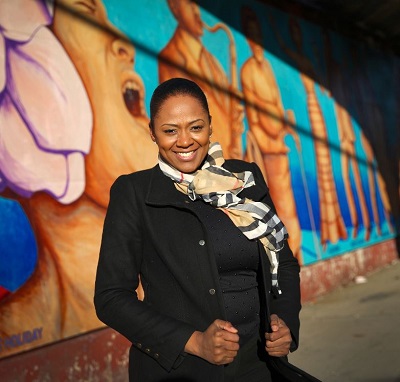 The café is similar to the space that welcomes customers in nearly 24,000 Starbucks stores around the world. What’s unique is the onsite training area. Two nonprofit organizations with long histories in Jamaica, Queens will use the space to help young people between the ages of 16 and 24 who aren’t in school and aren’t employed.

“We’re excited to be adapting our job training curriculum for opportunity youth to be used in the Starbucks store in Jamaica. What we’ll be doing is preparing them for jobs and potentially careers in the food service sector,” said Ben Thomases, Executive Director, Queens Community House. “Starbucks is renowned for the quality of its customer service and we know those skills are transferrable to a wide array of positions in and out of the food sector.”

Queens Community House has prepared a six- to eight-week training curriculum for the store; complete with instruction on the basics of customer service, barista skills and food-safety certifications that will be applicable for positions in a variety of restaurants.

“Often when young people come to us for help they are hesitant at first and say, ‘You’re selling us a dream here.’ Then they realize the dream is real,” said Clare Dwyer, Y Roads Jamaica Center Director. “If they want to put in the effort and the work to do their part, while we do ours, they can be successful.”

‘Find their way in life’

Building on what it’s learned from the Jamaica store, Starbucks will open similar stores in 15 communities over the next three years that deliver the café experience customers are familiar with, along with onsite jobs skills training. The next store opening of this kind will be in Ferguson, Missouri.

The company’s vision is that these Starbucks stores will unite partners (employees) and customers in transforming their neighborhoods. That’s already happening in the Jamaica neighborhood.

Many of the partners who are working in the new store grew up in Jamaica, Queens. Others are from Brooklyn, other parts of Queens and the Caribbean island of Jamaica. 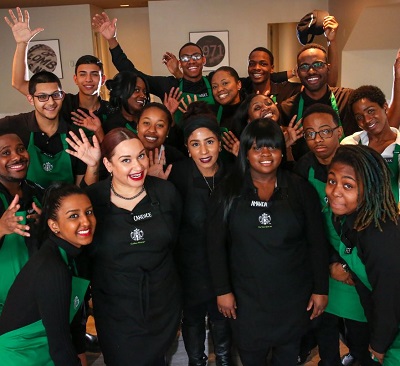 They range in age from 16 to 36 and have been with Starbucks from just a few weeks to 18 years. Their ultimate career goals include becoming a police detective, a firefighter, a teacher, Starbucks managers and entrepreneurs. Each was hired by Alisha Wrencher, the store manager, who described them as a “very passionate bunch” with “great personalities, energy and talent.”

“Partners are going to be able to make an impact in the community with people they know and see every day. And through the training space we’ll empower youth in the community to help them find their way in life,” Wrencher said. “I know there are people in Jamaica right now who don’t feel like they have options or hope. I’m here, and Starbucks is here, to say – you do.”