For over 20 years, the programming of Starbucks overhead store music has been led by the Starbucks Entertainment curators. With deep relationships in the music community, this team of two has built hundreds of playlists and programmed thousands of hours of songs. Yet, with the recent integration of Spotify into the Starbucks mobile app, the opportunity for music discovery is even more dynamic, offering new ways to think about unique content curation.

Now, for the first time ever, Starbucks Entertainment team is working with well-known artists to let the musicians who inspire them select the music heard in the company’s U.S. stores through a Guest DJ Series launching today (April 8).

The first of four Guest DJ playlists is created by Brittany Howard of the Alabama Shakes, and includes songs from The Who, The Velvet Underground and Laura Mvula. Music from Alabama Shakes has long been featured in Starbucks stores and the band recently won four GRAMMY Awards, including Best Alternative Album for 2015’s Sound & Color.

Howard’s playlist is available on the Starbucks profile on Spotify, or through the Starbucks mobile app under “Now Playing.” Customers can save the playlist to their favorites and take it with them using Spotify.

“We love music and we love learning about music,” said Holly Hinton, Starbucks director of curation. “The Guest DJ series lets us ask artists we’ve worked with for many years about what music inspires them so that we can bring new and interesting creative content to our customers.”

Additional playlists curated by Guest DJ artists will be released on Fridays through May 6. 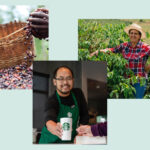 Starbucks partners collaborated to create two Spotify playlists of the artists and songs bringing them peace and happiness right now.

As the season of giving good continues, Starbucks stores will serve beverages in a new red holiday cup for a limited time, featuring a white heart framed by two hands coming together.

Born This Way Foundation and Lady Gaga are taking over the airwaves at Starbucks, sharing songs of love and kindness.