Balancing the demands of work and family was a challenge for Kim Jung-mi. After seven years as a Starbucks barista, she left her job to focus on her home life.

“I loved my work, but I needed more time to attend to my three children,” she said.

More than 20 percent of married women in Korea take career breaks due to pregnancy, childbirth and parenting, according to a 2015 study by Statistics Korea. With 80 percent female partners (employees), Starbucks Korea collaborated with the Ministry of Gender Equality and developed the Returning Mothers Barista Hiring Program to increase the number of women who have the opportunity to resume their careers.

“We recognize the benefits of a diverse workforce,” said S.K. Lee, president, Starbucks Korea. “We are providing women the support they need to return to work with our company, while feeling confident that their family will be supported as well.”

Through the Returning Mothers Barista Hiring Program, moms can work between the hours of 11 a.m. and 3 p.m. with a 30-minute break. Those who wish to increase their hours have the option of working a maximum of eight hours per day. They also receive full company benefits, incentives and bonuses. In addition, the company helps these partners pay for their children’s school tuition.

Since President Park Geun-hye of the Republic of Korea took office in February 2013, achieving the national employment rate of 70 percent has been an important goal. In recognition of the Returning Mothers Barista Hiring Program’s success, Starbucks Korea received the Presidential Award for job creation in early 2016, which is the highest form of recognition by the Korean President. This is the fourth consecutive year Starbucks Korea has been recognized for creating jobs in the country.

“It was such an honor for us to receive the Presidential Award,” said Lee. “We will continue to do our part to attract new and returning talent to our stores and support Korea’s economic well-being.”

Since the launch of the program in 2013, 71 mothers have resumed their careers at Starbucks. 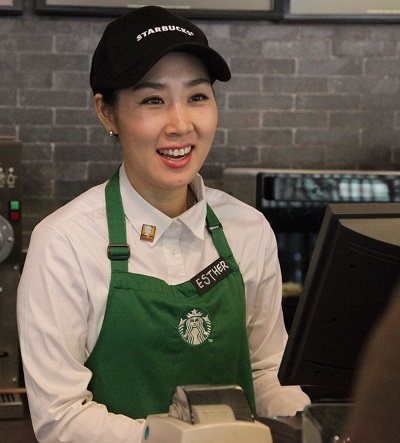 “As a working mother, I am able to attend to customers more effectively and personally. Having an active career is very satisfying,” Kim Jung-mi said. “The best part is that this program provides me the flexibility to care for my children and also pursue my passion as a Starbucks barista.”