When Starbucks senior designer Dana Deininger was given the chance to create two new special edition Starbucks Cards, he reflected on the early days of Starbucks. 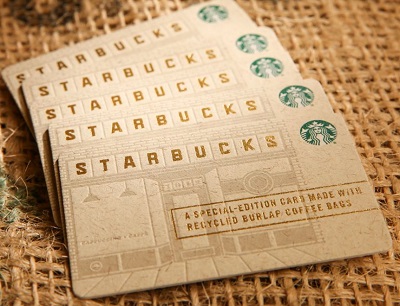 Deininger, who began as a Starbucks barista 15 years ago, drew inspiration from the company’s first store in Seattle’s Pike Place Market. The card features an imprinted design of the iconic storefront with gold-foil-stamped lettering. It’s also Starbucks first paper card made with recycled burlap coffee bags.

“Burlap bags carry unroasted coffee all over the world,” he said. “The recycled material of the card speaks to Starbucks coffee heritage.”

The paper Starbucks Card is available while supplies last in participating Starbucks® stores in the United States and Canada. 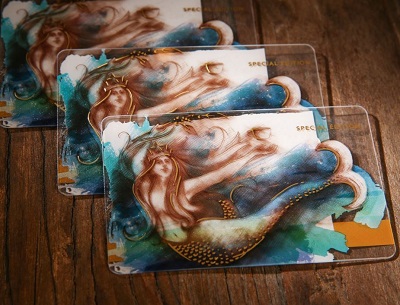 Next Deininger turned to the Starbucks Siren, the twin-tailed figure at the center of Starbucks logo.

He began with a pencil sketch of the Siren, a coffee tree branch in her right hand and a cup of coffee floating gently above her left. He added brushstrokes of watery metallic blues and greens highlighted by a layer of shimmering gold foil.

“I wanted to breathe life into the Siren’s story,” he said. “My idea was to capture the Siren in a moment, seeing her in her world.”

The card is available for a limited time in participating Starbucks® stores and online at Starbucks.com.