From the ancient rooftops of Prague to the heart of Chengdu, China, Starbucks stores around the world offer a place to connect with friends and unwind. In the summer months, Starbucks customers can enjoy warm breezes out on patios under the shade of a green umbrella. Imagine the feeling of a warm sunset, the smell of ocean air and the sounds of rippling water while viewing these Starbucks stores with exceptional places for dining alfresco. 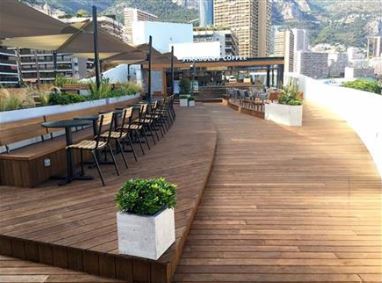 There’s no better place to soak in the romantic ambiance of Monaco than the new Starbucks atop Ni Box entertainment center. The space, nestled between the legendary Monte Carlo Casino and the sea, is surrounded by raised terrace areas that offer beautiful views of the Mediterranean. Expansive sails offer shade from the sun and echo the sailboats passing by. 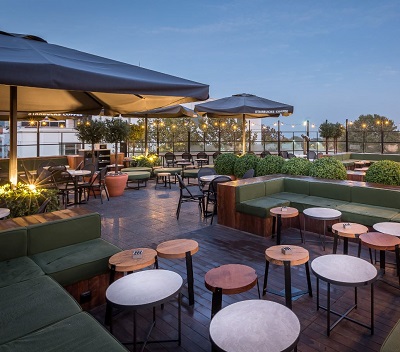 Each day, dozens of ferries crisscross Istanbul’s Bosphorus Strait, shuttling passengers east and west between Asia and Europe. Watch the hustle and bustle of these passages from the rooftop deck of the three-story Kadikoy Starbucks store on the eastern (Asia) side of the straight. The store takes inspiration from the aesthetic of the boats and the ferry buildings, with local marble, brass details, terrazzo flooring and a teak-like iroko wood. 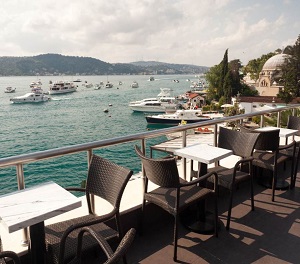 Cross over the Bosphorus to the Bebek Starbucks and catch another stunning view from the European side of the city. 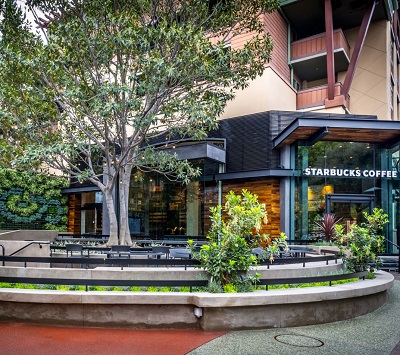 The outdoor patio at the Downtown Disney in Anaheim, California is a unique place to relax and enjoy a Starbucks beverage. The grand exterior design is centered around an old-growth tree. Reclaimed wood siding and a living wall made of more than 1,000 native plants in the shape of a coffee cup serve as a backdrop to capture memories for visiting guests. 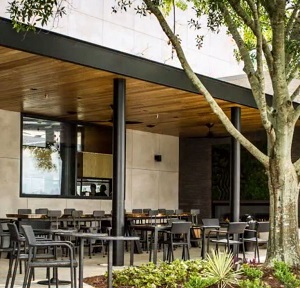 At the Downtown Disney in Orlando, Florida, customers can enjoy a quiet moment in the shady patio area near the lake. An outdoor fireplace provides ambiance, while an art installation of the Starbucks Siren made of moss adds a touch of whimsy and tranquility. 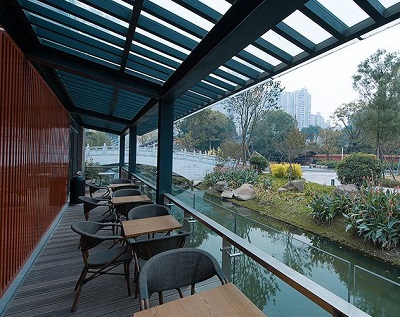 Perhaps nothing is more peaceful than the sound of a gentle river. At the Tianfu Riverfront Starbucks store in Chengdu, China, customers can enjoy a cup of coffee along the Jinjiang River.  The location is composed of two freestanding buildings with a river-facing balcony designed to take advantage of the scenic view. Architectural elements such as sliding windows and doors help to create visual relationships between the two spaces and connect customers as the river rolls on by. 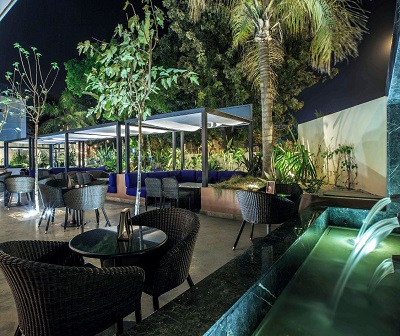 In the North African coastal city of Casablanca, visitors to the Starbucks store in Franklin Roosevelt Villa can enjoy a quiet afternoon sipping coffee amidst the villa’s luscious green garden and landscaping. The modern Mediterranean design features spaces to appeal to groups of friends, colleagues, families, singles and couples with canopied banquet-lounge group seating and European alfresco style arrangements. It’s the perfect place to listen to the bubbling fountains and distant sea. 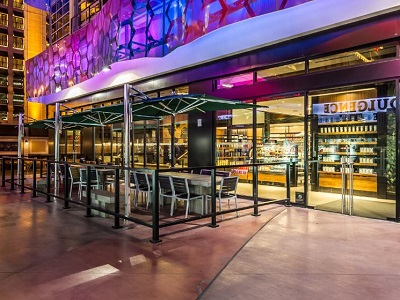 For those looking for excitement, nothing beats the energy of the Las Vegas Strip. The patio outside the Starbucks at the Grand Bazaar offers a front-row seat to the bright lights of Las Vegas, with an exterior that features a modern, undulating covering in vivid colors. After nightfall, the design element comes alive during the Grand Bazaar’s nightly light show with white flashes of light choreographed to modern pop music. 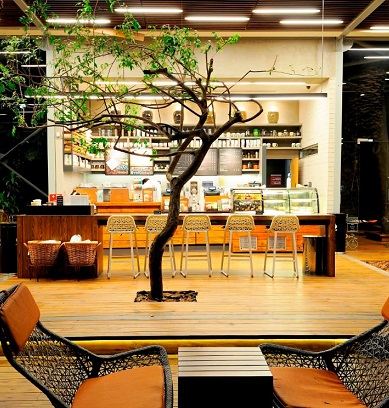 At the Chapultepec Reforma Starbucks in Mexico City, customers can sip and sway in the store’s lush garden patio. Located within the Bosque de Chapultepec, the largest park in Latin America, the store blurs the line between the interior and exterior, with trees growing from the floor and layers of planters throughout the space. Woven outdoor furniture, inspired by traditional Mayan hammocks, offer a unique place to unwind. 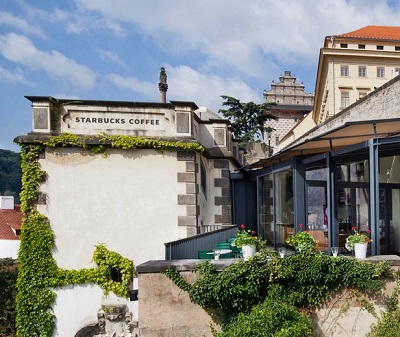 For a majestic view, perhaps nothing can compare to the Starbucks at Prague Castle, one of the largest ancient castles in the world. From the 10th century, it has been the seat of the head of state – by princes, kings, rulers of the Holy Roman Empire, and now the president of the Czech Republic. Near the entrance to the historic castle is a Starbucks store with a beautiful panorama of the city. From the stone terrace, you can enjoy a cup of coffee with the red-tiled roofs and green domes of the city below.