When red Starbucks cups return, it’s a signal that the holiday season is drawing near.

Starbucks customers are getting an early taste of Starbucks holiday beverages starting today (October 22) along with a glimpse of this year’s red holiday cups in some of Europe’s most recognizable shopping destinations: Selfridges in London and Birmingham, England; Galleries Lafayette in Paris; and in Austria at Donau Zentrum in Vienna and Europark in Salzburg. Starbucks® stores around the world will follow with holiday beverages starting in early November.

“We have anchored the design with the classic Starbucks holiday red that is bright and exciting,” said Jeffrey Fields, Starbucks vice president of Design & Content. “The ombré creates a distinctive dimension, fluidity and weightedness.”

Since 1997 Starbucks has served its holiday beverages in a unique cup, starting with a jazz-themed design in jewel tones of deeper reds, greens and blues. Every year since, the cup has told a story of the holidays by featuring symbols of the season from vintage ornaments and hand-drawn reindeer to modern vector-illustrated characters.

“In the past, we have told stories with our holiday cups designs,” said Fields. “This year we wanted to usher in the holidays with a purity of design that welcomes all of our stories.”

In the nearly two decades since the first red Starbucks cup, the company has grown from 1,400 stores in a handful of countries to more than 22,000 stores in 68 markets around the world.

“Starbucks has become a place of sanctuary during the holidays,” he said. “We’re embracing the simplicity and the quietness of it. It’s more open way to usher in the holiday.” 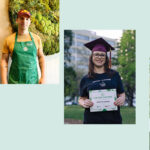