“I knew immediately when I walked in there that I wanted to work with Starbucks and I was going to get the job,” said Raven Myers.

When job seekers converge in Phoenix for the second Opportunity Fair & Forum later this month, they might want to keep a young Chicago woman’s experience in mind.

Two months ago the 22-year-old was a student looking to find her first paying job when she arrived at the first Opportunity Fair & Forum in Chicago. More than 4,000 young people showed up at the McCormick Place Convention Center for the event with more than 30 companies represented – all looking for talented employees.

One could understand if Myers had felt a little overwhelmed by the size of the crowd and the weight of her task. For a moment she was intimidated as she took stock of the crowd. Myers soon found her bearings and got down to business securing a job with the company of her choice.

“I’m going to go over there right now and interview with Starbucks. And I know, I just know, they’re going to give me that job,” Myers recalled.

From Chicago to Phoenix

More than 800 job offers have been generated by the Chicago job fair as part of the 100,000 Opportunities Initiative, the nation’s largest employer-led coalition. In the next three years, the coalition is committed to hiring at least 100,000 opportunity youth – 16-24 year olds who are not in school or employed. The coalition, now composed of 33 leading companies, expects to find work for hundreds more opportunity youth in Phoenix on October 30. Of America’s 25 largest cities, Phoenix and the surrounding Maricopa County have the highest rate of disengaged youth. The challenges young jobseekers there and elsewhere face are very real, but Myers believes they’re not insurmountable.

Myers’s self-confidence and resolve made an immediate impression on Sam Delgado, an 11-year Starbucks partner (employee) and store manager since 2012. Delgado interviewed applicants in Chicago and was ready to endorse Myers as a “must-hire” after a quick but meaningful conversation.

“When we started talking about things like customer service, connection and working well with others, she just had this amazing ability to speak to all those things having never worked in the retail-service industry,” Delgado said. “If I interviewed this person in my own store, I would have offered her a job right on the spot.”

Myers was representative of a number of applicants who left the Chicago event with job offers, according to Delgado. Like many of her peers, some of Myers’s top selling points weren’t the kind of things that show up on a conventional resume.

“Quite a few people we met had no true work history,” Delgado said. “But they had a lot of volunteerism, a lot of community service and things that they had done through their high schools or church groups or youth groups. They simply didn’t know that these were things they could put on their resumes.”

For young people who want to work with Starbucks, he suggests adding community service and volunteer work to the top of their resumes.

“Raven had done a lot in her community and she was really passionate about helping others,” said Delgado. “When you see people doing that for nothing in return, it’s refreshing and it really gives you a good idea of who that person is and what they’re going to bring to Starbucks.”

On the Job with Starbucks 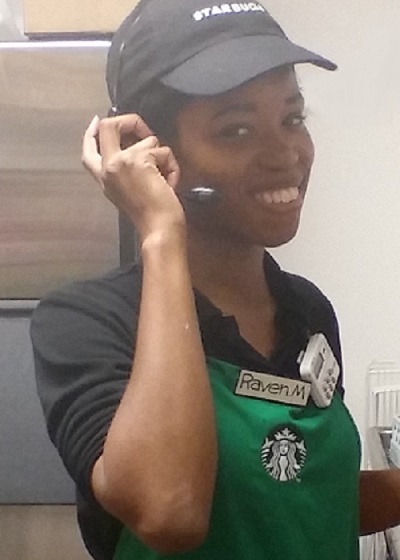 Myers, who studies at Olive Harvey College in Chicago’s far South Side, has been on the job at a Starbucks in the Greater Grand Crossing community since late August. She’s been trained in a variety of roles around the store and enjoys getting to know the store’s regular customers.

“Even though I’m making a few mistakes here and there, it’s all coming together,” she said.

As for young people who will participate in the Opportunity Fair in Phoenix, Myers offers this advice: Be confident.

“I think everybody has a skill and you just have to showcase that skill,” she said. “What am I good at? How can I help? How can I make things better? You have to go in there knowing what you want to do.”

Register Here for the Phoenix Opportunity Fair and Forum – October 30, 2015 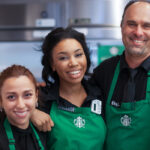