You’d be surprised how similar the words “short” and “tall” look in Korean when you’re reading lips.

That’s something Kwon Soonmi has learned to distinguish. Kwon has been a Starbucks barista in Seoul since the summer of 2011 and, judging by at least one gauge, she’s popular having won “best smile” in a contest voted on by customers.

Kwon’s beaming smile, however, isn’t the only thing that sets her apart. She’s deaf. That presents some challenges, but nothing that she hasn’t learned how to handle. An example of how she’s learned to communicate in many ways is with orders for short or tall beverages.

Overcome, she has, working to refining her customer greeting, double-checking to make certain she fully understands orders and taking time to improve communications with her cohorts. She is also passionate about latte art.

“The heart is my favorite,” she said. “Although it is one of the easier patterns to create, I find it the prettiest.”

In the midst of creating latte art and serving customers, Kwon impressed a man who often visited her store.

“100 roses were delivered to my store with a letter in which he wrote that he would like to take me out on a date. That’s how it all began,” said Kwon, who has now been married to that customer for nearly three years. After they were married, she discovered he doesn’t drink coffee at all. Even so, he is her “biggest fan.”

Kwon is humbled by recognition from other customers regarding her smile. Although she’s shy when talking about it, she said the honor “proves we understand and recognize each other, and it makes me feel happy and proud.”

Korea is key to Starbucks continued success since the opening of its first store in Seoul in 1999. Today, Starbucks Korea operates more than 770 stores across 64 cities and is the company’s fourth largest market outside of the U.S. 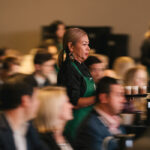