Chalk it up to having true talent.

“I always want to inspire our customers or encourage anybody to see what we do in a little more depth,” said Turner. “If I can help towards this by drawing up some chalk art, then I’m happy.”

Starbucks has used hand-drawn chalk signs to highlight daily coffee and food offerings since the company was founded in 1971. Since then, thousands of baristas around the world have demonstrated their artistic skills to through store signage.

For Turner, producing chalk art for Starbucks is a natural extension of the artwork she began creating as a child.

According to Turner’s parents, she started drawing at a young age.

“My dad was very artistic and my mum is very creative, so I’ve got them to thank,” said Turner. “My family has always encouraged me to do things that make me happy, and drawing has always been one of them.”

Turner grew up in a small seaside town an hour outside of London. She studied fine art and animation at the University of Essex, where she earned a Bachelor of Arts degree in 2009. Turner finds inspiration in sketches and story artists from films. This is reflected in her personal artwork, which is often based on pop culture and movies.

“I’ve always been a huge film fan, mostly independent movies, the kind of films that are a bit edgy and surreal,” she said. “Music plays a big part as well. Generally, I’ll draw as a way to wind down and relax.”

Shortly after graduating from college, Turner became a partner at the Southend High Street Starbucks® store in London.

“I had to learn to draw again,” said Turner. “But that was it, it set off a little spark and I got my passion back. I have Starbucks to thank for that.”

Turner also had to understand how to work with chalk, which she had not used as a medium in the past.

“Generally, chalk is a little trickier than what I’m used to,” said Turner. “It’s always a challenge, but great fun. I never fully plan before I start drawing a chalk design. I usually research a few key pieces of imagery and go from there.”

“Starbucks is a highly creative company and we find that many of our partners have skills to support this work,” said Lara Behnert, senior creative manager for Starbucks Global Creative Studio. “Those who are inclined to make signage often self-identify and find this work gratifying.”

Turner now shares her talents outside of Starbucks as well. She served as a cup artist at the 2015 London Coffee Festival that took place in April and also creates and sells illustrated prints.

“I’ve been lucky enough to send around my artwork to people who love the pieces enough to buy them,” she said. “It’s amazing.”

Chalk art and cup illustrations courtesy of Rebecca Turner: “I would like to personally thank all of the store partners in my district, primarily the Essex store manager team who continue to support me every step of the way in my career.” 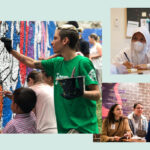