When Rodney Hines and Rebecca Chamberlin sat down to discuss the qualities they were looking for to fill a particular Starbucks store manager role, there were some givens. The position requires leadership qualities, business skills and a customer-first attitude in all instances. The store manager they were searching for, however, would be overseeing a particularly high-profile Starbucks located in a city of 21,000 that has found itself the focal point of international attention.

Hines, Starbucks director of community investments for retail operations, and Chamberlin, a regional director for the company, were searching for the right person to manage the first Starbucks opening in Ferguson, Missouri.

Starbucks chairman and ceo Howard Schultz suggested finding a Ferguson location for a store after hosting an open forum on racial inequality and social justice with Starbucks partners (employees) in and around St. Louis earlier this year, following the upheaval prompted by the killing of 18-year-old Michael Brown. Touring Ferguson, and hearing from partners in other communities like it across the U.S., led to a Starbucks initiative to open stores in diverse, low- to medium-income urban communities across the country.

‘Cordell would be the perfect person to run this store’

When that initial discussion of job candidates occurred, Chamberlin immediately thought of someone she’d worked with years earlier – a Missouri native who’d supervised a video game store just down the street from the West Florissant and Somerset intersection where the new Starbucks is being built.

Chamberlin recalled how Cordell Lewis created events at his store that engaged locals with music and special activities. He was seen as something of a sales star at their old company, but she was equally impressed with the way he interacted with customers and employees.

“I knew, based on the work that he had provided and just his personality, if he was available and at all interested, Cordell would be the perfect person to run this store,” Chamberlin said.

Lewis was still living in the community, but he had a job and was taking courses at St. Louis Community College. When Chamberlin tracked him down and made her recruitment pitch, he was initially hesitant to change direction. What sold him was the mission this Starbucks and others like it would be advancing.

“I like a challenge and I don’t like anything that’s stagnant,” Lewis said. “And this is not stagnant at all.”

At the groundbreaking ceremony for the new Ferguson Starbucks, Lewis presented a coffee tasting and talked about his vision for the store he’ll be managing.

Ferguson will be the second Starbucks store opened as part of a push to support economic development and social change in diverse low- to mid-income communities, preceded earlier in 2016 by a store in Jamaica, Queens in New York. Later in the year similar stores will open in the Englewood neighborhood of Chicago’s South Side and Milwaukee, and a remodeled store will reopen in Phoenix. All these Starbucks® stores will include a dedicated classroom area where local nonprofits will conduct job-skills training classes for youth. The emphasis on community engagement and education helped Lewis overcome any initial misgivings.

He has lived in the Ferguson/Florissant area for the last decade. He put in three years at Missouri State University in his hometown of Springfield, but didn’t complete his college education years ago. Now the 37-year-old plans to finish his degree and recently enrolled in online classes at Arizona State University as part of the Starbucks College Achievement Plan. The college benefit gives partners an opportunity to receive a bachelor’s degree with full tuition reimbursement. 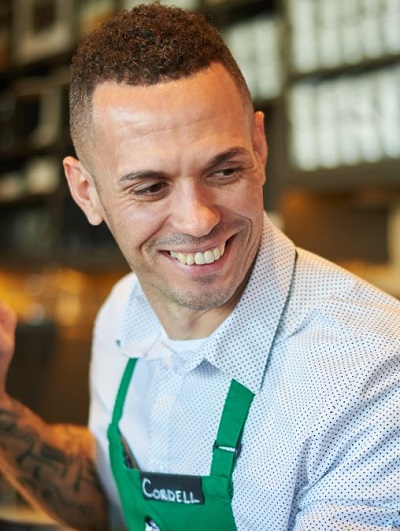 Lewis has already hired five people to work at the Ferguson Starbucks, which will open next spring, and he’s raising his profile in the area, giving a presentation on Starbucks employment opportunities at nearby Hazelwood East High School. He looks forward to managing a store where “everyone is treated with respect, whether they’re coming in for a glass of water after they’ve come in on the bus from their job downtown or they want to get a handcrafted beverage while they’re studying for a test at the community college.”

Drawing from the Local Community

Lewis’s recruitment reflects an emphasis on the part of Starbucks to make a genuine connection with Ferguson. The developer of the new building is Otis & Clark Properties, a respected regional operation cofounded by former St. Louis Cardinals running back Jim Otis. As part of the drive to support local women- and minority-owned businesses, products from Natalie’s Cakes & More will be featured at the Starbucks in Ferguson.

The bakery, which is owned and operated by Natalie DuBose, is a five-minute drive from the site of the Ferguson Starbucks. Opened in June 2014, it suffered extensive damage following rioting last November. GoFundMe campaigns helped the business get back on track and Starbucks is now carrying DuBose’s signature caramel cakes at a dozen St. Louis-area locations. As a result, her workforce has grown from three to 13. Her father, whose own caramel cakes inspired his daughter’s popular concoction, also checks in at peak periods.

Like Lewis, DuBose is heavily involved in the community. She speaks regularly about entrepreneurship at local high schools, hires locally and sources her ingredients from local businesses whenever possible.

The rapid expansion she’s overseen has presented challenges, but the Ferguson resident credits Starbucks with helping her navigate operational issues that come with growth. “Yes, there have been bumps in the road and growth spurts where it hurt a little bit, but Starbucks has been, honestly, just a phone call away,” she said. “The hard parts aren’t that hard because they’re there.”

DuBose was also at today’s groundbreaking ceremony. She brought along a couple of new baked items for guests to try – a chocolate and white chocolate chip, pecan and macadamia nut cookie she’s dubbed the Quad and a mocha coffee cupcake, made with Starbucks VIA® Coffee.

“Other doors are opening because of this partnership,” DuBose said. “Not only doors where people are able to reach out to me, but I’m able to reach out to people, like all of these school events that are taking place now. The partnership with Starbucks allows me to give back to Ferguson community and surrounding communities as well.”