Customers are familiar with the warm, welcoming environment of Starbucks stores. From friendly baristas who share their coffee knowledge and passion, to the design of a space that helps customers discover and enjoy Starbucks products – every moment of connection is personal.

How does Starbucks translate a cozy, emotional experience to an often cold, impersonal grocery store aisle?

“Our goal is to bring the Starbucks store experience alive in the aisle,” he said. “Almost as if a barista is standing with you in the store while you’re making a buying decision, offering you a tall skinny mocha.”

As president of Starbucks Global Channel Development, Conway leads a team of about 550 partners (employees) who study consumer behavior and find ways to connect people around the world with Starbucks products where they live, work and play.

“While most people think the majority of coffee purchasing and consumption occurs in cafes, actually the opposite is true,” said Conway, who spoke at the IRI World Summit today (April 21, 2015). “Of all the moments that Americans consume coffee, only 20 percent happen in retail stores. That’s a vast opportunity for us.”

One Million Points of Connection

Starbucks consumer packaged goods (CPG) products are available in grocery stores, airports, hotels, and convenience stores in nearly 40 countries around the world. There are more than one million places outside of the coffee shop where a customer can find a Starbucks product, including about 120,000 grocery and convenience stores.

In the grocery store, research shows the average shopper spends about 87 seconds in the wine aisle, 74 seconds in the tea section and 68 seconds in the coffee aisle. Customers are willing to explore and discover new products, rather than quickly grabbing a favorite cereal or the least expensive paper towels.

Part of bringing an “engaging, educational” Starbucks experience to a grocery setting involves helping shoppers make choices when they have a bit more time to spend in the coffee aisle, he said.

“Some of our grocery spaces pull through design elements from Starbucks stores,” Conway explained. “It’s like a mini store with design features like a pendant light, tile backsplash, a counter that mimics the hand-off plane – signal a unique experience.” Those Signature Aisle features help consumers select a coffee that suits them.

In addition to leveraging the in-store experience, Conway said Starbucks brings the CPG experience to life through the company’s digital and loyalty platform (My Starbucks Rewards), and through product innovation. Frappuccino, which recently celebrated its 20th birthday, is a notable example of an iconic Starbucks product that has been translated from cafes into the CPG space.

“S’mores Frappuccino is being introduced in Starbucks stores later this month and a bottled version is now available,” he said. “Multi-channel synergy between handcrafted and CPG products allows us to grow in a meaningful way for consumers.”

Starbucks chairman and ceo Howard Schultz has often said, though the company is more than 40 years old in many ways “we’re just getting started.” The same is true for Channel Development. Although Conway has 20 years of experience in CPG, he’s only been at Starbucks for two years and said he’s excited to build grow the brand through Channel Development.

“It might not be an exaggeration to say I’m obsessed with this,” Conway said with a smile. “My wife doesn’t like to go to the grocery store with me. We walk in together and I’ll say, ‘see you in a few minutes,’ then I’m lost in the store. There’s so much to learn walking up and down the aisles. It’s energizing for me.” 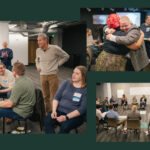