Starbucks marks its fifth designer mug collaboration with a collection of two limited edition Starbucks® Double Wall Ceramic Mugs created by Scott Sternberg, founder and designer of Band of Outsiders. Designed exclusively for Starbucks, the contemporary mugs combine a classic and iconic Starbucks style with Band of Outsiders’ rebellious approach to design – a must-have for fashion mavens and Starbucks fans this summer. The Band of Outsiders for Starbucks® Limited Edition Designer Ceramic Mugs will be available online at StarbucksStore.com on June 10, 2014 and in participating Starbucks® retail locations in the U.S. and Canada on June 24, 2014.

The Band of Outsiders for Starbucks® Limited Edition Designer Ceramic Mugs offer refreshingly laid back appeal, celebrating a simple palette and a modern approach. Either mug (12 fl oz.) makes for a statement accessory to dress up your cup of coffee.

Founded in 2004 by Scott Sternberg, Band of Outsiders is known for its modern, rebellious take on American style. What started as a line of men’s shirts and ties inspired by Scott’s youth has since developed into a full line of casual men’s and menswear-inspired women’s clothing lines with a cult following, known for its shrunken schoolboy blazers, narrow oxford-cloth shirts, and impeccably cut trousers. Scott’s designs draw from a strong, personal sense of nostalgia for American classics.

“The coffee drink you choose – drip, espresso or a latte – is a form of style and self-expression just as important as what you choose to put on in the morning.” – Scott Sternberg

Inspired by great design, Starbucks has a history of innovative collaborations with fashion’s elite and is excited to collaborate with Band of Outsiders for its fifth designer mug. Over the years, Starbucks has teamed up with Jonathan Adler, Rodarte and Charlotte Ronson and most recently, Stacey Bendet of alice + olivia, to bring unique limited edition mugs to customers.

Available at participating U.S. and Canada company operated-locations and online at StarbucksStore.com 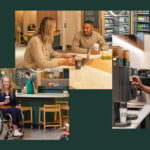