At the age of seven, Chelsey Meissner traveled with her family to Guatemala. Her father had a job that took him around the world and he wanted to make sure his kids appreciated other cultures, which often meant eating with the locals.

Driving from Antigua to Tikal, they stopped in a small home, far off the main road. The Meissners were invited to join a local family for a meal of tamales. Coffee – made of finely-ground charred corn – was served to everyone, even Chelsey and the other children.

“I vividly remember that it didn’t smell like the coffee my parents made,” she said. “My first taste of coffee, on my first trip outside of the United States, was something I’ll never forget and it wasn’t only about the coffee. The experience of sharing a meal and coffee broke down any cultural or language barriers that existed between our families.”

The experience stirred Meissner’s curiosity about coffee. The next day, she went to a coffee farm with her father.  Her love of coffee was fortified when she became a Starbucks barista and store manager. Then, at the age of 25, she returned to a coffee farm for a Starbucks Origin Experience and worked side-by-side with farmers who picked every coffee cherry by hand.

“Everything between my first sip of coffee and my passion for Starbucks has brought me to this point,” said Meissner, a seven-year partner (employee) and the first store manager of Starbucks Reserve® Roastery and Tasting Room.

“And everything Starbucks is and stands for is under one roof, and I’m standing under that roof. I feel very fortunate,” she added.

Meissner is one of 40 partners at the new retail space in Seattle’s Capitol Hill neighborhood.

Many of the partners, who are the first to work at the Roastery, moved to Seattle from other parts of the U.S. and from around the world to be a part of the one-of-a-kind location that showcases the craft of roasting and the art of brewing coffee.

Yuri Woon became a Starbucks barista in 1997, soon after the company opened its first store in Japan. She moved to Seattle in 2010 and studied English, determined to become fluent with the language so she could confidently connect with Starbucks customers.

“It wasn’t easy to keep my motivation, but I wanted to be where I can be myself, where I can improve as a person, and where my love is – Starbucks,” said Woon.

A few years later she returned to Starbucks as a barista in the company’s original store in Pike Place Market. Today Woon said she feels “honored” she was chosen to work at the Roastery, and will be able to use her barista skills and ability to speak two languages with customers visiting from Japan.

“I want people to experience a sense of belonging with us, because I feel that with my Starbucks partners,” she added.

That’s a feeling Coulter Smith can relate to.  The summer job he picked up as a Starbucks barista in 2003 turned into a career with the company and he’s now the general manager of Starbucks Reserve® Roastery and Tasting Room – a space Smith describes as “the warmest, most innovative manufacturing plant customers will ever see.”

Smith is most excited about being able to show customers how Starbucks cares for farmers in coffee origin countries and how the company sources small lot coffees that are among the rarest in the world.

“Our partners are incredibly talented, not just in their knowledge of coffee but in their craft,” said Tiffany Broderson, vice president of operations, Reserve and Roastery, and a 15-year Starbucks partner.

Broderson said the most essential element in the innovative space is something that has been a part of Starbucks culture from the beginning – moments of connection between partners and customers.

While Starbucks customers have always had personal connections with their baristas, for the first time they’ll be able to interact with partners responsible for roasting coffee beans. An estimated 1.4 million pounds of coffee will be roasted on-site at the new location in the first year. 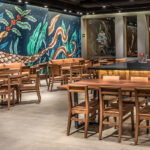