It was an ordinary fall day when Anthony Hesseltine walked to his office building in Seattle, glanced up and saw a huge blue flag with a white number 12 flying above the iconic Starbucks Siren logo.

In the run up to the Seattle Seahawks Super Bowl victory, the flag celebrating the football team’s fans had temporarily replaced the U.S. flag which is displayed every day on Starbucks headquarters building.

“It was such a surprise and it was so fun to see support for our hometown team,” said Hesseltine, a Starbucks partner (employee) for 10 years. “Then I thought, what if? No. Well, maybe?”

Months later, Hesseltine began floating the idea of having the Pride Flag raised on Starbucks headquarters for the first time.

“There was no resistance,” he said. “It was more difficult for me to find and purchase the flag than it was to get people in the building to support the idea of flying the Pride flag.”

As a sourcing manager for Starbucks supplier diversity program, Hesseltine has connections. A certified-diverse supplier based in Seattle, Zippy Dogs, created the custom flag, which was manufactured in Madison, Wisconsin. Incidentally, in 1982 Wisconsin became the first state to outlaw discrimination on the basis of sexual orientation.

“I love it when a plan comes together. Since Wisconsin was the first state in the nation to pass non-discrimination laws, that was the icing on the cake for this project” he said.

Today a 38-feet wide by 19-feet tall rainbow flag was raised on top of Starbucks headquarters and will remain through this weekend’s Seattle Pride Parade.

Hesseltine is one of about 400 members of Starbucks Partner Pride Alliance Network. The affinity group has been around for about 15 years and in 2007 it became an official partner network. The company’s support for LGBT partners and customers goes back even further.

“Given our public stance on diversity and inclusion of all people, particularly on this issue, it makes sense to raise the flag in celebration,” said Lucy Helm, Starbucks executive vice president, general counsel and secretary. “Being open, inclusive and forward-thinking is at the core of what Starbucks is about.”

Starbucks most vocal statement on equality was spontaneous.

During the question and answer portion of Starbucks 2013 Annual Meeting of Shareholders, a stockholder voiced his view that the company had lost customers because of its support for gay marriage. At the time, a group opposed to Starbucks support of marriage equality had called for a boycott of the company.

“In the first full quarter after this boycott was announced, our sales and our earnings – shall we say politely – were a bit disappointing,” said the shareholder.

“Not every decision is an economic decision,” responded Howard Schultz, Starbucks chairman, president and ceo. “Despite the fact that you recite statistics that are narrow in time, we did provide a 38 percent shareholder return over the last year. I don’t know how many things you invest in, but I would suspect not many things, companies, products, investments have returned 38 percent over the last 12 months. Having said that, it is not an economic decision to me. The lens in which we are making that decision is through the lens of our people. We employ over 200,000 people in this company, and we want to embrace diversity of all kinds.”

Melissa Nussbaum, an inside sales rep for Starbucks Branded Solutions, was in the audience that day.

“Wow. I got chills hearing what Howard said. That was a bold statement,” she said. “I would not have been ashamed of Howard if he had given a more reserved answer, but it was clear that he was speaking from the heart. Support of the LGBT community is genuine.”

Nussbaum grew up in a small Washington town and didn’t come out to her family until 2008.

“Being a partner at Starbucks gave me the courage to tell my family that I’m a lesbian,” she said. “Because Starbucks embraces diversity, and being gay is really a non-issue, I gained the confidence to be who I am.”

“At Starbucks you can bring your whole self to work,” added Keith Cunningham, a senior paralegal in Starbucks law and corporate affairs department.

Cunningham said he’s “old enough to remember” when people who were gay changed their “pronouns” in conversations at previous workplaces.

Those who felt a need to conceal their orientation would avoid gender references when talking with co-workers, Cunningham explained. Instead of referencing a boyfriend or girlfriend, they’d say “friend” or a more ambiguous “we.”

“There was an enormous amount of energy that went into concealment and trying to fit in,” Cunningham said. “I did not do that. I know that cost me promotions early in my law career. At Starbucks, no one has to conceal who they are. The only judgments made are about the quality of your work, the passion at which you do your job and the enthusiasm and skills you bring to the company.”

Starbucks Pride Alliance Network hopes to expand with chapters across the United States and eventually globally. For now, members are pleased to see the symbolic rainbow flag above the Starbucks siren.

“This is exciting,” said Hesseltine, “but it shouldn’t be surprising.” 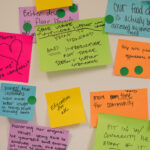