China and India have much in common. They are the world’s most populous nations with the fastest growing economies. They also have vast contrasts. Their governments, infrastructure and business cultures differ.

How does a U.S.-based company prosper and grow in both of these countries?

Two Starbucks executives say it’s accomplished through the way the company cares for its partners (employees). Before speaking together March 19th, 2014 for Starbucks Annual Meeting of Shareholders, the president of Starbucks China and the chief executive officer of Tata Starbucks Limited discussed the coffee company’s growth in their countries.

“In India, the consumer is very discerning and their expectations are high. Starbucks had a lot of equity among consumers in India before it launched,” said Avani Davda, ceo of the joint venture between Starbucks and Tata Global Beverages Unlimited, a unit of the largest business group in India.

Davda, who has been with the Tata Group for 12 years, was a part of the team who traveled to the U.S. several years ago and determined that because both companies have similar values a 50-50 joint venture with Starbucks was a natural fit. For over 150 years the core of the Tata brand has been doing business the ethical way despite financial challenges, she said, while giving back to the community.

“One thing that struck me about Starbucks at the time was the respect it had for cultural differences, which is not always common with large companies,” Davda said. “That respect now comes out in the way we design our stores, and treat our people.”

The service industry in India does not have a positive reputation, Davda said. Creating a work environment where partners feel appreciated is important to her. That includes visiting stores to talk with baristas and implement their suggestions.

Starbucks opened its first store in Mumbai, India in October of 2012. The company now has 40 in the country with plans to “nurture each store” and double the number of Starbucks locations in the next year.

By 2015, Starbucks plans to have 1,500 stores in China. The first Starbucks store located in mainland China opened in Beijing in January of 1999.

“We’re trying to build a different kind of company in China and are mindful of how we grow while maintaining the heart and soul of what Starbucks stands for,” said Belinda Wong, president of Starbucks China. “Growth has to be built on the foundational values of Starbucks.”

Those values include taking care of partners, exceeding the expectations of customers and being relevant in the communities Starbucks serves. Relevance in some China locations involves adding some locations that are larger than most stores to accommodate large groups of customers for business or social gatherings.

Starbucks has also factored in family dynamics and expectations in China, where success can be judged by the title on one’s business card. Family forums have been held for parents of store partners to hear managers discuss gratifying career paths at Starbucks.

Wong, who was the third Starbucks partner hired in Hong Kong 14 years ago, often shares her career story with baristas and their families.

“I’m a very tenacious person. In 14 years I went from a functional role to becoming the president of Starbucks China and I tell partners ‘If I can do it, you can do it too,’” she said.

At a time when female executives like Facebook’s Sheryl Sandberg are offering advice for young women in the workplace, neither Wong nor Davda consider themselves to be role models.

“Gender and age are secondary to what you deliver to the business and how you do it,” said Davda.

Wong’s suggestion for people at any stage of their career is to “stay curious all the time.”

Both women are humble about their abilities to lead thousands of new Starbucks partners in China and India over the next few years.

“I am just one of many who are creating a history for Starbucks in China,” said Wong. “We learn together, and I learn so much from my store partners.”

“The number of stores will increase, profitability will come, but it is in taking care of our partners that we will be able to lay the foundation of the Starbucks brand for years to come," Davda added. "That is the challenge that I love.” 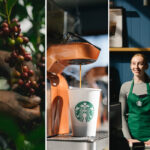