Company to build a pipeline of talent focused on veterans and active duty spouses, including infrastructure to support at least 10,000 hires in five years

Company will thank those who serve our country, and the impact they make on our communities around the world, by offering a free tall brewed coffee to veterans, active duty military and military spouses on Veterans Day

SEATTLE, November 6, 2013 – Starbucks Coffee Company (NASDAQ:SBUX) today announced a strategic commitment to develop a comprehensive hiring platform for veterans and active duty spouses in response to record growth and in anticipation of a 500,000 person future global workforce. In addition, a store in Lakewood, WA and a store in San Antonio, TX will begin sharing a portion of each transaction with non-profit programs Operation GoodJobs and Vested in Vets as part of a commitment to establish five such stores in joint base communities around the United States.

“The value we are creating for shareholders is tied to the values that guide us as an organization. As I look at the opportunity ahead of us, we’re going to need to hire men and women with like-minded values and the right job skills in order to continue our current levels of growth,” said Howard Schultz, Starbucks chairman, president and chief executive officer. “The more than one million transitioning U.S. veterans and almost one and half million military spouses – with their diverse background and experience – share our mission-driven sensibility and work ethic and can build long-term careers at Starbucks as they return home.”

This multi-year hiring and career development strategy will focus on establishing an internal infrastructure dedicated to matching the transferable skill sets of veterans and military spouses with the specific talent needed across the Starbucks enterprise. It will also build upon and expand the company’s specialized mentoring programs as provided via the Armed Forces Network (AFN), a peer organization whose emphasis is to ensure new hires have access to the information and resources they need to be successful. The AFN has been a part of Starbucks since 2007, supporting transitioning military and has led the company’s efforts to make it an employer of choice for new hires.

“One of the most significant challenges our veterans face is a corporation’s inability to understand and translate the skills of military service into a meaningful private sector role,” said former Defense Secretary Robert M. Gates. “Veterans and military spouses represent one of the most underutilized talent pools in our country and, without the proper career path, will continue to go untapped. Companies like Starbucks recognize this opportunity and are moving swiftly and aggressively to match the jobs they will create in the future with the talent returning to America over the next several years.”

As an organization with nearly 200,000 partners (employees) worldwide, Starbucks growth and leadership opportunities will be as diverse as the backgrounds required of them. From running a million dollar enterprise as a store manager to specialized supply chain, manufacturing or logistics roles, the portfolio of careers available at Starbucks reflects the need for highly skilled applicants. This, in collaboration with flexible work schedules and comprehensive benefit packages, makes Starbucks an employer of choice for the more than 100,000 partners who wear the green apron across the United States. Prospective candidates can learn more about how their backgrounds align with Starbucks positions through a jobs skills translator that is available on Starbucks veterans hiring website: Starbucks.com/careers/veterans/

“On behalf of the First Lady and Dr. Biden, Joining Forces applauds Starbucks commitment to support our nation’s veterans. All over the country, companies like Starbucks are stepping up to serve our veterans and military families the same way they’ve served our country. Our servicemen and women lead in complex environments, build teams, and are natural managers of people and resources to get things done. That’s why hiring veterans isn’t just the right thing to do, it’s also a smart business decision” said Colonel Rich Morales, Executive Director, Joining Forces.

“Companies that fail to engage the military community to identify quality job candidates are doing t,hemselves a tremendous disservice” said Marjorie James, Executive Director of Hire America’s Heroes. “Veterans and military spouses are valued members of mission driven teams and working with an organization like Starbucks gives them an opportunity to establish a long term career that builds on that sense of purpose in pursuit of a common goal.”

In collaboration with this internal hiring infrastructure, Starbucks is leveraging one of its innovative community engagement models, the community store, to support the development of external career resources for service members and their spouses. Built upon a model of shared responsibility, a portion of each transaction within a community store is directed to a local nonprofit to assist in meeting the specific needs and opportunities of that community.

Neighborhoods in joint base locations offer significant opportunities to work with programs that have established tools targeting returning service members trying to achieve long-term economic security but lacking the necessary or consistent funding to maintain or grow these initiatives. Vested in Vets based out of San Antonio, TX and Operation GoodJobs, based out of Tacoma, WA, both programs of Goodwill, provide localized, positive learning environments with a proven track record of success. For example, between April 2012 and July 2013, Operation Good Jobs served over three hundred veterans and family members placing over 220 in local jobs.

In addition to these strategic initiatives, and as exemplified by the recent Come Together campaign, small gestures of kindness and compassion can bring people together and serve as a catalyst for conversation in the neighborhoods where they live and work. It is in this spirit that, on Veterans Day, all U.S. company owned locations will offer a free tall (12 fl. oz.) coffee to veterans, active duty military and military spouses in the United States as a gesture of thanks for their service. We are humbly indebted to their commitment, every day, and have never lost sight that the freedoms we enjoy are due in no small part to the sacrifices our veterans and their families have made over the years.

Read more about what others are saying about Starbucks and Veterans. 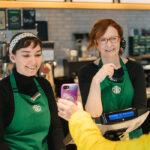