NEW YORK, June 17, 2010 – the betacup today announced the winners of its open innovation challenge to reduce paper cup consumption. Starbucks Coffee Company sponsored the contest as part of its aim to serve 100 percent of its hand-crafted beverages in reusable or recyclable cups by 2015.

The winning idea is Karma Cup, with special jury mentions going to Band of Honor, The Betacup & The Betacup Campaign, and Champion Cup.

“We’re really excited about the outcome. I think the betacup shows that using social tools to engage and organize people around an issue can yield very useful outcomes. The community and jury selections point to a wide range of interesting options that, together, offer short- and long-term steps to eliminate paper cup waste,” said Shaun Abrahamson from Colaboratorie Mutopo, a group of mass collaboration specialists who co-founded the betacup. “We’re very grateful to the thousands of participants for sharing their ideas and thinking, and we look forward to working with them to bring the best ideas to life.”

The contest took place on the betacup‘s partner platform jovoto.com, a leading open innovation platform and creative community. Ideas were submitted from April 1 to June 1, 2010, and remained open to the public for discussion and rating through June 15, 2010. The participant who submitted the best idea, determined by an expert panel, will receive a $10,000 cash prize. In addition, participants whose ideas were among the top five selected by the community of collaborators will each be awarded a $2,000 cash prize.

Starbucks provided $20,000 in cash prizes for the contest. The company also offered participants commentary and feedback throughout the contest period.

“We know we can’t solve the disposable cup waste issue alone,” said Jim Hanna, Starbucks director of Environmental Impact. “Consumers can play an important role by sharing creative ideas and spreading the word, as they’ve done with the betacup. It’s this kind of passion and enthusiasm that will help the reusable cup movement gain real momentum.” In 2009 Starbucks served more than 26 million beverages in reusable cups in its company-owned stores in the United States, Canada, and the United Kingdom. This simple shift in behavior kept nearly 1.2 million pounds of paper from ending up in landfills.

In addition to Starbucks, the betacup was made possible through the support of a number of other organizations. Media partner Core77 has published design updates since the challenge launched. Core77, a New York-based design network, has provided online services, resources, and inspiration. Denuo, an innovations unit of Publicis Groupe and Good Day Monsters, created the “60 Seconds to Save the World” campaign to drive consumer engagement. Threadless, a community-centered online apparel store run by skinnyCorp, helped generate awareness through its Threadless Loves Coffee T-shirt design challenge, and Instructables, a website specializing in user-created do-it-yourself projects, operated a separate contest to explore alternative uses for paper cups.

Visit http://thebetacup.com to learn more and be part of the solution.

the betacup was started by Toby Daniels, a social entrepreneur, together with Shaun Abrahamson and Marcel Botha of Colaboratorie Mutopo. In early 2009 they began looking at the problem and discovered that each year, in North America alone, over 58 billion paper coffee cups are going into landfills. Through consumer research, they discovered reusable alternatives work well, but aren’t widely used because they are less convenient than paper cups.

Mutopo is a social product development firm based in New York City. It helps organizations?tap into an abundant source of energy and talent: expert and fan communities. Through the use of the Mutopo OPTO framework (Outcomes, People, Tools & Organization), the firm?creates organizational scaffolding to support these communities during social production projects. Social production is a new approach to matching those who love to create and produce with the individuals and organizations that need to create and produce, opening incredible new ways to participate.

jovoto is a unique online platform that delivers creative collective intelligence and builds on the concept of ?crowdsourcing’.

The company’s vision is a new form of sourcing, working with creative talent to provide brands with great ideas, relevant insight and visibility, generated through social media. jovoto provides a fair and collaborative environment for creatives and brands through the just treatment of property and patent rights, and democratic allocation of prize money through the promotion of community-based idea exchange. The jovoto community of 10,000 agency-caliber creatives has delivered results to brands such as AirBerlin, Greenpeace, PayPal, Starbucks and UNICEF. Privately held, jovoto was established in 2007 by Bastian Unterberg. It has European headquarters in Berlin and US headquarters in New York City. Visit?www.jovoto.com?for more information. 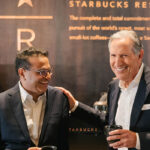 Holiday traditions may look different this year, but at a difficult and unprecedented time for people around the globe, Starbucks partners are finding ways to keep the spirit of love, connection, peace, hope and community at the root of their favorite traditions alive and well.

This Earth Day, meet some of the people working to make coffee sustainable

In celebration of the 50th anniversary of Earth Day, take a virtual field trip to Costa Rica to meet some of the agronomists and farmers working to address the effects of climate change.