Seoul, KOREA; Jan. 10, 2018 – Starbucks Coffee Korea Co., a 50/50 joint venture between Starbucks Coffee International, Inc. and Shinsegae Group, celebrated the opening of Korea’s largest Starbucks store in Central Seoul near Jonggak Station in December 2017. Located in Jongro Tower, with more than 900 residents, the store sits between two of the Tower’s floors covering over 1,000 square meters (11,000 square feet). Jonggak Station serves as a gathering place for all generations of Koreans to shop, dine, work and play in a location where history and tradition of Korean culture merge with modern city amenities.

The Jongro store features a “Grand Bar,” a triangular bar on the second floor measuring 25 meters (82 feet), making it the largest stand-alone bar at any Starbucks across South Korea, and puts both coffee forward and Teavana handcrafted beverages at centerstage.

Beyond the Grand Bar, the space also offers a space known as the Coffee Stage, for a more personalized and intimate coffee experience with Starbucks baristas. In addition, specially-designed seating zones, inspired by the six commonly traded goods among Koreans during the Chosun Dynasty, provide comfortable seating for large groups, close friends and individuals to enjoy a cup of coffee in this unique atmosphere. 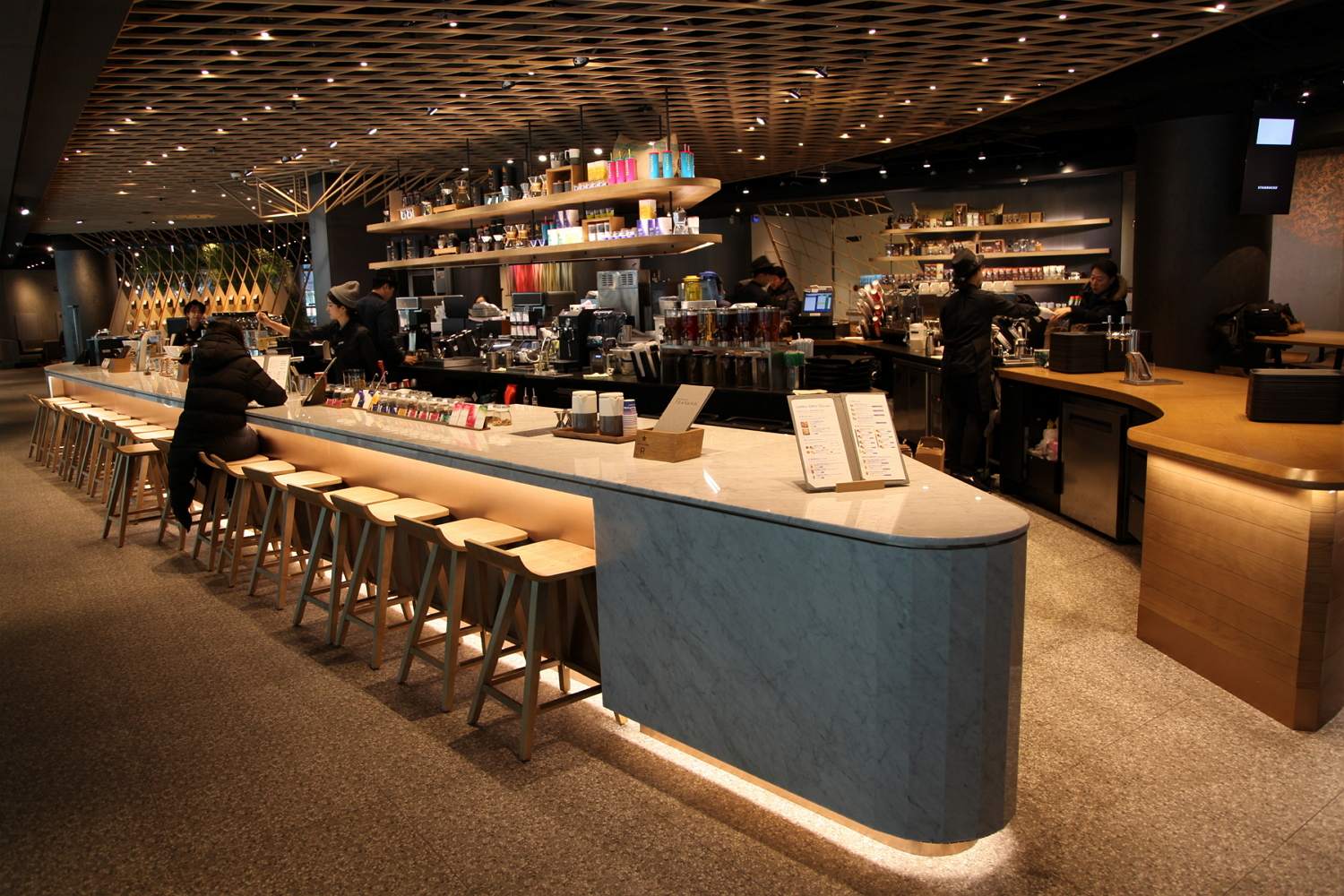 “The Jongro store represents the 19-year coffee journey we’ve been on with Korean customers,” said S.K. Lee, CEO, Starbucks Coffee Korea. “We are pleased to create a place which pays respect to our Korean heritage while elevating the coffee retail experience customers have come to expect of Starbucks.”

The beverage menu at the Jongro store includes nearly 100 handcrafted customized beverages. The Teavana Blueberry Bliss and Teavana Lavender Sage beverages are uniquely brewed on a Siphon to extract the full tea flavors and aromas. These teas, as well as the Starbucks Reserve Origin Flight and Reserve Brew Comparison tasting experiences, can only be found at the Jongro store.

In addition, more than 60 locally-sourced food items are available, including seven various rice dishes such as a Cactus rice ball with beans and sweet potato, as well as light meals and snacks, and can be found only at this location.

“We are committed to innovating the Starbucks Experience to meet the expectations and needs of our customers and are proud to bring our Korean customers closer to our coffee and partners (employees) than ever before,” said Mark Ring, president of Starbucks Asia Pacific.

Since opening in 1999, Starbucks today has more than 1,140 stores across 75 cities in South Korea. Employing over 13,000 partners (employees), Starbucks Korea is a leading Employer of Choice in the country and is also a model of corporate citizenship with an robust social impact agenda, partnering with over 140 communities and nonprofits to serve its partners and the community.

Starting this month, fall Starbucks flavored coffees and creamers are back on grocery store shelves for a limited time only.

Starbucks welcomes customers back for indoor dining in Shanghai 

To celebrate the milestone and welcome customers back, coffee tastings – Starbucks signature coffee ritual – were held in all 800 stores.