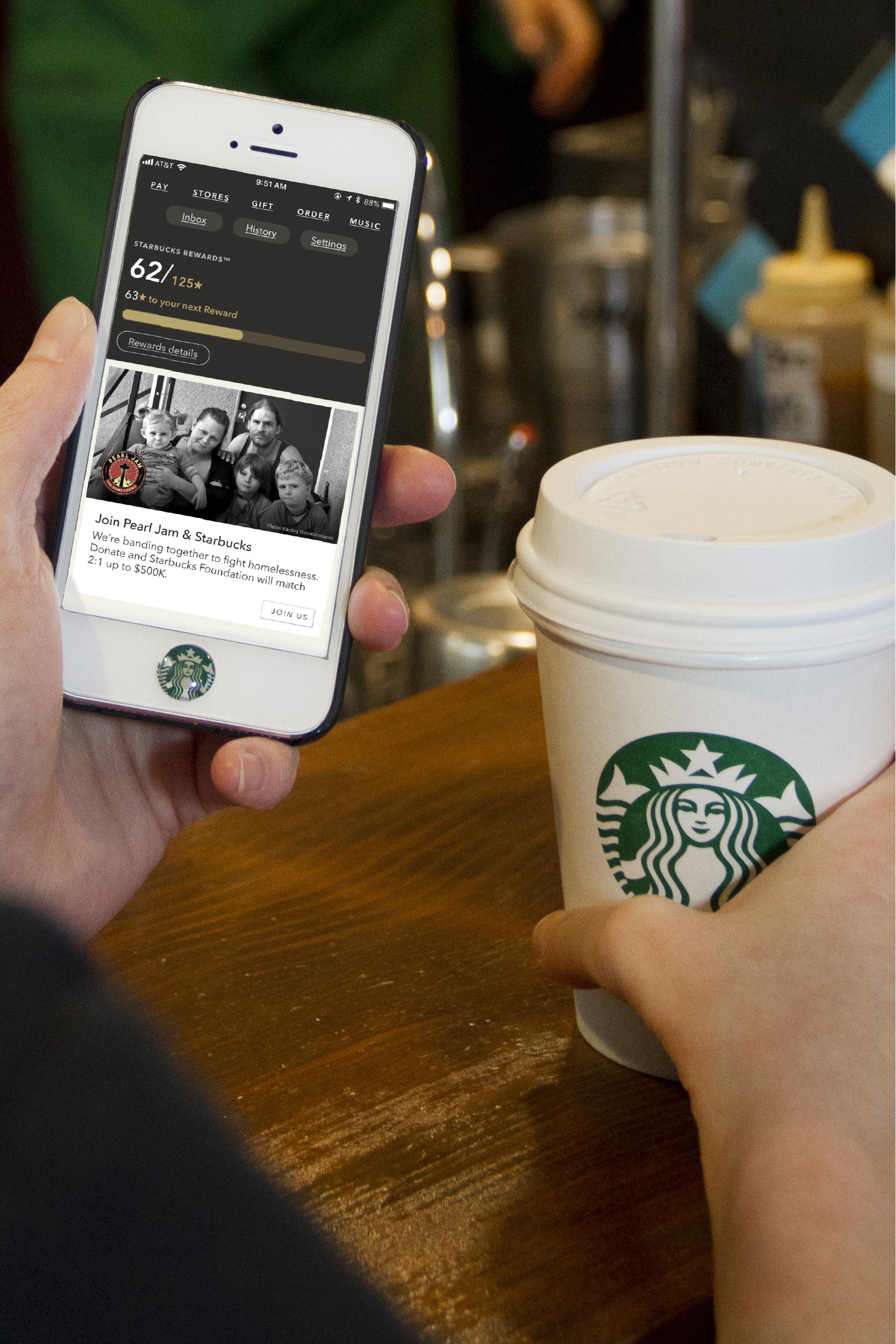 Every dollar donated using the Starbucks® mobile app from July 31 through August 12 will be matched 2:1 by The Starbucks Foundation up to $500,000

SEATTLE (July 30, 2018) – As Pearl Jam gets ready for their much-awaited Home Shows next month, Starbucks is inviting customers to donate to the band’s Home Fund, which will support a range of organizations in King County, Washington working to move people to stable housing and keep people from becoming unsheltered in the first place. Starting tomorrow through August 12, The Starbucks Foundation will match 2:1 every dollar customers donate to the Home Fund through the Starbucks® mobile app or online at www.pearljam.com/fighthomelessness up to $500,000, all to address the crisis of unsheltered families and children sleeping outside. With this donation, The Starbucks Foundation’s support over the last two years alone for unsheltered families in King County will total more than $3 million.

“Starbucks has been an important partner in the Home Shows project, leading the charge in helping to shelter families. I applaud the steps they have taken in this area and I look forward to seeing what they do next. Seattle’s business community has a huge role to play in addressing our homelessness crisis – we all do,” said Pearl Jam guitarist, Stone Gossard.

“These historic shows are a timely and urgent opportunity for us to keep making progress to bring families with young children inside now, before the rain and cold return,” said Kevin Johnson, Starbucks president and ceo.

Starbucks also partnered with Pearl Jam to produce a series of short films capturing the crisis of homelessness in the region – and the individuals and organizations working to bring real change to the community. These videos are available on Pearl Jam’s The Home Shows website, YouTube page, and on the Starbucks Newsroom.

An Urgent Call to Bring Unsheltered Families Inside

Starbucks remains active in the fight to bring families and children inside, with many still waiting months on average for emergency shelter as they sleep on the streets, in cars and parks across the community. The company continues to advocate for an immediate expansion of critical, short-term emergency shelter for families and has partnered with Mary’s Place to support the No Child Sleeps Outside campaign for two years.

Most recently, the campaign exceeded its initial goal of $1.5 million by raising $2.2 million. Starbucks and other local businesses and foundations donated $4 million the year before to fund the opening of three new shelters in White Center, Shoreline and Northshore that have provided services for over 500 families. The funds raised during the December 2017 campaign are currently supporting continued operating costs to bring an additional 800 family members to shelters and move more than 300 families into permanent housing.

Earlier this year, Starbucks partners (employees) from the community joined the United Way of King County, Mary’s Place, Wellspring and other local providers to host the first Family Resource Exchange event to bring critical resources and support to more than 100 families and children. The exchange meets families where they are in their community to offer services like housing resources, employment opportunities, meals, legal and financial services, childcare and other public benefits. A second Family Resource Exchange will take place on August 16, at Olympic Hills Elementary School in Seattle. In June, the company also brought together more than 50 business leaders, government officials, service providers and families at its headquarters in Seattle for a summit to begin laying out a plan to better reach unsheltered families and provide urgent support.

Since 1971, Starbucks Coffee Company has been committed to ethically sourcing and roasting high-quality arabica coffee. Today, with stores around the globe, the company is the premier roaster and retailer of specialty coffee in the world. Through our unwavering commitment to excellence and our guiding principles, we bring the unique Starbucks Experience to life for every customer through every cup. To share in the experience, please visit us in our stores or online at http://news.starbucks.com or www.starbucks.com.

About The Starbucks Foundation

Established in 1997, The Starbucks Foundation strengthens communities around the world by advancing opportunities for youth, veterans, refugees and coffee, tea and cocoa farmers and their families, supporting communities affected by disaster, and promoting civic engagement. The Starbucks Foundation is a U.S. 501 (c)(3) charitable organization under U.S. law, and receives funding primarily from Starbucks Corporation and private donations. Learn more at https://www.starbucks.com/responsibility/community/starbucks-foundation

About The Home Shows

On August 8th and 10th, Pearl Jam will play The Home Shows, two concerts at Safeco Field with one goal: banding together to fight homelessness. As part of the shows, Pearl Jam is giving at least $1 million to alleviate homelessness in King County. They’re inviting local businesses, foundations, and individuals to grow that to $10 million. For more information about The Home Shows initiative, visit pearljam.com/thehomeshows.

of the major standards and policies we’ve put in place to protect our partners and customers. We will continue to heed the advice of public health experts and make decisions based on sound science.

Starbucks shared a series of updates on programs and partnerships focused on addressing the root causes of chronic homelessness in its hometown of Seattle, Washington.