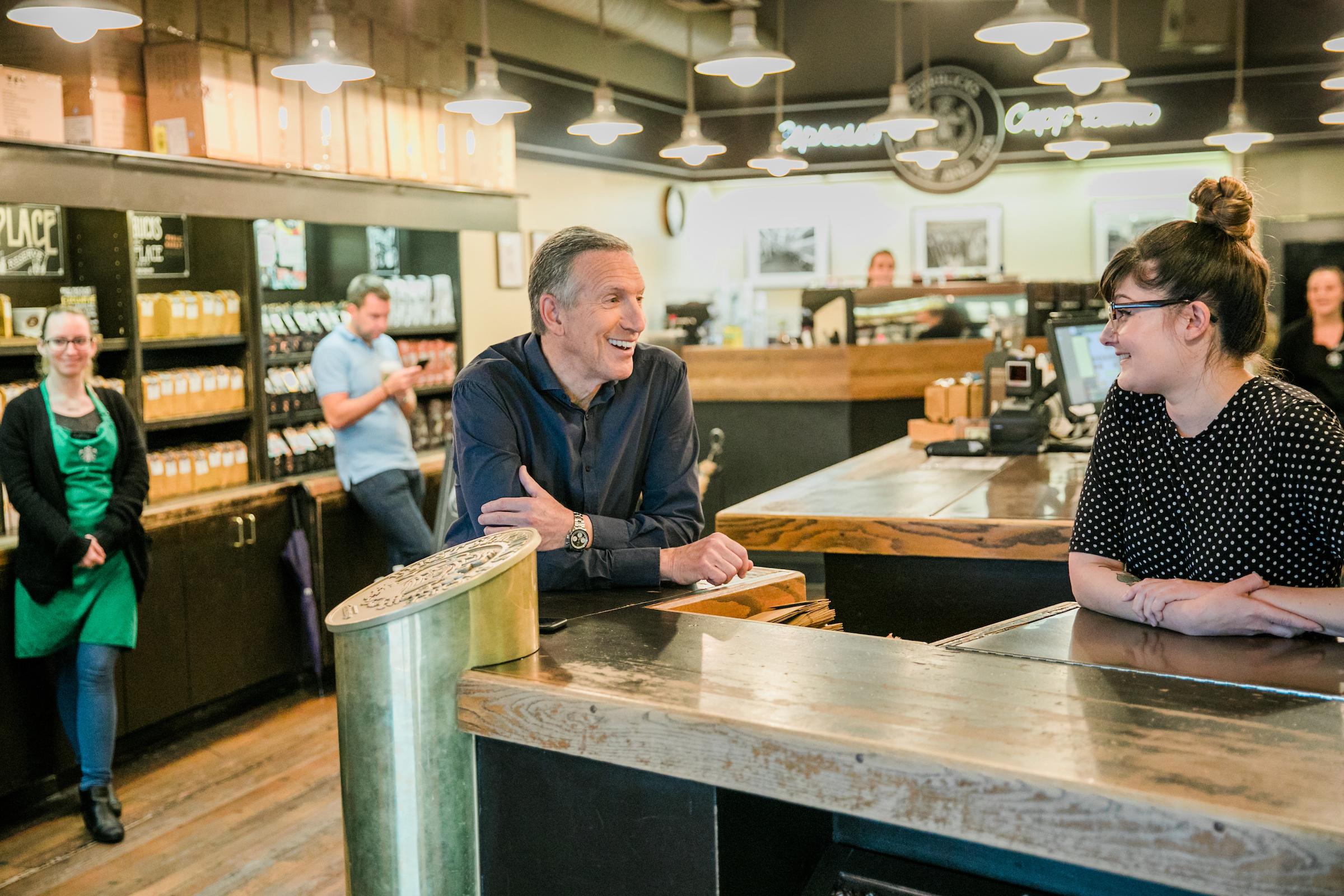 Schultz, who reimagined the Italian coffeehouse tradition in America and redefined the role and responsibility of a publicly-held company, announces his departure as executive chairman of Starbucks

Schultz, who will be honored as chairman emeritus, tells over 2 million past and present partners (employees), “We did it together, by balancing profitability and social conscience”

Schultz’s stewardship of the Starbucks brand and business delivers 21,000% price appreciation for shareholders since its 1992 Initial Public Offering

SEATTLE (June 4, 2018)– Starbucks Corporation (NASDAQ: SBUX) today announced that Howard Schultz is stepping down as executive chairman and member of the Board of Directors and will be honored with the title of chairman emeritus effective June 26, 2018.

During his four decades as ceo and chairman, Schultz grew Starbucks from 11 stores to more than 28,000 stores in 77 countries, while demonstrating that a business can simultaneously deliver best-in-class financial performance and share success with its people and the communities it serves.

Under Schultz’s leadership, Starbucks has delivered a 21,000% gain in the value of its stock price since its initial public offering in 1992. The company’s growth was fueled by his decisions to provide uncommon benefits for those who work for Starbucks, including comprehensive healthcare, stock ownership and free college tuition, even for those working part-time.

“I set out to build a company that my father, a blue-collar worker and World War II veteran, never had a chance to work for,” Schultz wrote in a letter addressed today to past and present Starbucks partners. “Together we’ve done that, and so much more, by balancing profitability and social conscience, compassion and rigor, and love and responsibility.”

Schultz’s journey began in 1981, when he walked into the first Starbucks store, located in Seattle’s iconic Pike Place Market. The following year, he moved with his wife, Sheri, from New York to assume the role of director of operations and marketing. Schultz’s passion for the highest quality coffee heightened on a business trip to Italy, where he was captivated by the sense of community, romance and theater found in Italian coffee bars. In the years following his return to Seattle, Schultz purchased Starbucks with the support of local investors and dedicated his career to bringing his vision of a modern coffee house to life in America and around the world.

Schultz elevated the concept of Starbucks as the third place between home and work: a comfortable, welcoming environment that provides uplifting experiences, community and human connection.

Among his many accolades, Schultz has been named as one of The World's Most Influential People by Time magazine as well as Business Person of the Year by Fortune.  Most recently, Schultz has received the Robert F. Kennedy Ripple of Hope Award and has been presented with the Atlantic Council’s Distinguished Business Leadership award and the NAACP LDF (Legal Defense and Education Fund) National Equal Justice award.

This year, Starbucks was named the fifth most admired company in the world by Fortune, marking the 16th year in a row that the company has appeared on the global list. Starbucks was also named one of the World’s Most Ethical Companies by the Ethisphere Institute for the 12th consecutive year and was ranked as one of 2018’s Most Innovative Companies by Fast Company, most notably for its social-impact work.

On April 3, 2017, Schultz transitioned from ceo to executive chairman, shifting his full-time focus to the company’s social impact initiatives as well as innovation and global development of the company’s premium Reserve brand, including Starbucks Reserve Roasteries, Reserve stores and the Company’s partnership with renowned artisanal Italian bakery, Princi. Following his transition off the Starbucks board at the end of June, Schultz will oversee the opening of the Starbucks Reserve Roastery in Milan on Sept. 6 – marking the company’s long-awaited entry into Italy – and the New York Roastery in late October.

Starbucks also announced today that its Board of Directors has appointed Myron E. “Mike” Ullman as its new chair of the Board and Mellody Hobson as vice chair of the Board effective upon Schultz’s retirement. Starbucks world-class, values-based board is comprised of accomplished leaders representing diversity and excellence in global technology, retail, consumer experience and other relevant skill sets.

“There are no words to fully express our gratitude to Howard for the extraordinary company he has built,” said ceo and member of the Board of Directors Kevin Johnson. “He’s helped Starbucks earn the respect of millions around the world by always being true to a higher calling, and always being bold in creating a better future. He’s taught all of us that it’s possible to be a very different kind of public company. That must, and will, continue on my watch.”

In Schultz’s letter to partners, he thanked them for their collective efforts to build a different kind of company. “Because of your creativity, your hard work, and the love that you have poured into the company, Starbucks today is widely embraced and respected. As I prepare to step away, I’d like to humbly remind you not to lose sight of what matters most: your fellow partners and our customers.”

He also expressed deep confidence in the team that will continue to lead the company. “Kevin Johnson is a true servant leader, and he will lead Starbucks as this great company enters its next journey. It’s our duty as leaders to constantly reimagine Starbucks. I am honored to call Kevin my friend and partner. And Starbucks is fortunate to have him. This leadership team is extraordinarily capable. They, too, believe that Starbucks has a responsibility to use our scale for good.”

Schultz is looking forward to spending more time with his family this summer. He is also writing a book about Starbucks social impact work and the efforts to redefine the role and responsibility of a public company in an ever-changing society.

To the more than 330,000 partners who wear the green apron today, and the millions before them, Schultz will forever represent Starbucks mission to inspire and nurture the human spirit one person, one cup and one neighborhood at a time.

Since 1971, Starbucks Coffee Company has been committed to ethically sourcing and roasting high-quality arabica coffee. Today, with more than 28,000 stores around the globe, the company is the premier roaster and retailer of specialty coffee in the world. Through our unwavering commitment to excellence and our guiding principles, we bring the unique Starbucks Experience to life for every customer through every cup. To share in the experience, please visit us in our stores or online at news.starbucks.com or www.starbucks.com.

Certain statements contained herein are “forward-looking statements” within the meaning of the applicable securities laws and regulations. Generally, these statements can be identified by the use of words such as “anticipate,” “expect,” “believe,” “could,” “estimate,” “feel,” “forecast,” “intend,” “may,” “plan,” “potential,” “project,” “should,” “will,” “would,” and similar expressions intended to identify forward-looking statements, although not all forward-looking statements contain these identifying words. These statements are based upon information available to Starbucks as of the date hereof, and Starbucks actual results or performance could different materially from those stated or implied due to risks and uncertainties associated with its business. These risks and uncertainties include, but are not limited to, fluctuations in U.S. and international economies and currencies, our ability to preserve, grow and leverage our brands, potential negative effects of incidents involving food or beverage-borne illnesses, tampering, adulteration, contamination or mislabeling, potential negative effects of material breaches of our information technology systems to the extent we experience a material breach, material failures of our information technology systems, costs associated with, and the successful execution of, the company’s initiatives and plans, the acceptance of the company’s products by our customers, the impact of competition, coffee, dairy and other raw materials prices and availability, the effect of legal proceedings, and other risks detailed in the company filings with the Securities and Exchange Commission, including the “Risk Factors” section of the Starbucks Annual Report on Form 10-K for the fiscal year ended October 1, 2017. The company assumes no obligation to update any of these forward-looking statements.

Starbucks Convenes 2,000 Retail Leaders from Across U.S. and Canada to Enable Leadership Excellence as Company Reinvents for the Future

Company leaders are attending a two-day gathering designed to build capability and confidence needed to transform their stores and the partner (employee) experience.