This past Fourth of July, I found a photo that triggered thoughts I felt compelled to share. 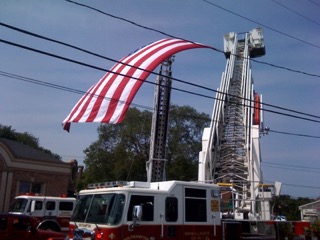 Eight years ago, in the summer of 2009, I took this picture as the town of Sag Harbor, New York, prepared for its July 4th celebration. To me, it’s an ordinary yet awe-inspiring image: as the fabric of our nation hangs from the extended ladders of two gleaming red-and-white fire trucks, the flag’s stars and stripes assert themselves in the summer breeze. In this photo of iconic American symbols, I see and feel so much. Past and present. Courage and sacrifice. Glory and tragedy. Loss and hope. And optimism.

The American Flag has long meant something more to me than just the symbol of our country. I view it as the physical manifestation of the sacrifices of those who came before us, as well as the freedoms that, today, so many are sacrificing to preserve and defend, especially the extraordinary men and women of our nation’s military.

To me, the flag also represents our country’s core values. It’s an enduring cloth of common threads that unites a nation founded on the right of all people to live freely, which by design encourages and invites the pronounced differences that exist among us today. No other country in the world houses so many people of such diversity, and those of us at Starbucks see, hear and experience that diversity every day, in our stores.

Behind and in front of our espresso bars—and in our offices, roasting plants and distribution facilities—exist partners and customers of differing political persuasions, religions, ethnicities, sexual orientations, and stations in life. Yet don’t we all basically want similar things? The love of family and friends, and the ability to care for those we love, as well as care for ourselves. Don’t we each want opportunities to pursue our personal dreams and to help make the dreams of others come true? And do we not all deserve to live and work in a culture of respect, civility, and dignity?

I write you today to remind you that, as Starbucks partners, you are in a position to bridge such differences and highlight our similarities. The servant leadership traits you assert every day—the compassion, the empathy, the respect for all who work in and enter our stores—are connective threads that bring people together in a sense of community. Never underestimate the power of your role, which is about so much more than the business of coffee. Like America, Starbucks is a place where differences flourish, and the human spirit unites.

Our purpose and reason for being has no boundaries. From China to Japan, from Mexico to the US, from the Middle East to Russia, we are all servant leaders with the potential to live our values and positively influence people’s lives, especially during these anxious, uncertain, and often uncivil times, when so many face acute challenges.

These are heady thoughts for a holiday week, but I just want each of us to remember what we stand for, and what we are capable of achieving as a company, as partners, and as Americans.