With twenty stores across Northern and Central Italy, Starbucks is committed to embracing Italian culture and coffee heritage. Italy is the country that brought espresso to the world and inspired the concept for what Starbucks has become today.

The first Starbucks store opens in the heart of Verona, in partnership with its strategic Italian licensee partner Percassi. This will be Starbucks 20th store in Italy, part of a broader expansion plan to bring the Starbucks Experience to all Italian customers. Since entering the market in 2018 with the Starbucks Reserve Roastery Milano, Starbucks has strived to be a company that values its partners (employees), customers and coffee.

Located at Galleria Palliccia near Piazza delle Erbe, the store covers an area of more than 400 square meters with 90 seats and a 70 square meter outdoor décor with 40 seats. The store’s interior has a contemporary design, whilst maintaining the building’s original architectural and decorative features.

“We are excited to bring the unique Starbucks Experience to Verona for the first time given this reaffirms our long-term commitment to continued growth in Italy,” said, Vincenzo Catrambone, General Manager of Starbucks Italy. “We look forward to welcoming the local community to try a handcrafted cup of Starbucks Caffé Verona® and relax with the comfortable seating.”

Customers in Verona, Italy will have the opportunity to taste Starbucks handcrafted hot and cold beverages, including the iconic Frappuccino® Blended Beverage, which can also be customised using various dairy alternatives. The food offerings are designed to satisfy the Italian palate with menus that are updated every three months according to the season: breakfasts in the morning with traditional Italian baked goods and indulging sweets from the American tradition, and at lunch will serve tasty sandwiches, including vegetarian options, such as grilled soy shreds, as well as toasts, savoury croissants, and sandwiches.

“Exactly a year ago, we announced that we were opening 26 new Starbucks stores by the end of 2023; and with this September marking Starbucks fourth anniversary in the market, we have even more exciting plans for further new city entries across Italy coming soon,” said Catrambone. “As the Starbucks store portfolio grows, we’re also evolving the formats and locations of new stores so that we bring the best of the Starbucks experience to our Italian customers to meet their needs and taste preferences.”

Verona was one of three Italian cities, including Milan and Rome, where Howard Schultz, Starbucks founder and interim chief executive officer, became first acquainted with Italian coffee culture in 1983. His intuition to bring the tradition of Italian coffee shops to the United States contributed to a worldwide expansion of the global coffee business.

Customers globally can celebrate with a cup of Starbucks® Caffé Verona®, a long-time fan favorite created as a dessert coffee, and honoring its romantic and ornate namesake city. As with all Starbucks coffee, the blend contains 100% arabica coffee and is responsibly sourced – according to Starbucks C.A.F.E. Practices. 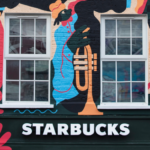 Create your own magical moments with Starbucks EMEA holiday merchandise

The holiday season has officially arrived at Starbucks. Along with Starbucks reusable Red Cup, fans and coffee lovers can find the perfect festive gifts with our new colour-changing reusable cups, character mugs, tumblers and festive cold cups, as well as reusable cup stoppers and ornaments, to celebrate the season in style. For 2022, Starbucks EMEA […]

Starbucks stores across the world create environments for Starbucks partners to connect with, engage and represent the communities they serve. And our new store in Camden, London is no exception – one of the city’s most vibrant areas, a hub of creativity and artistic talent, filled with buzzing street markets, unique fashion and live music. […]

Located in Sheffield, England – a city steeped in hundreds of years of rich, industrial history, Carbrook Hall itself goes back over four centuries. So it’s no surprise that the historic building, which now proudly stands as a Starbucks store, continues to bring history to life, enriched with Starbucks coffeehouse culture. Maintaining all the building’s […]