Starbucks UK is a retail business for the trade of gourmet coffee, tea and related products in the UK. The business remains heavily dependent on volume sales and footfall. During the period, it has continued to shift its offering from high street to Drive Thru and delivery formats, to meet the demands of the evolving consumer, while navigating the challenges of COVID-19.

Reported revenues decreased by 33% during the period, to £243.3m (2019: £361.7m), where the impact of Covid-19 was recognised primarily in the second half of the year. The decline was primarily down to COVID-19-related store closures and restrictions for the retail industry, after the eased reopening for UK businesses during 2020.

Gross profit for the period decreased by 54% to £32.3m (2019: £69.9m), because of labour costs staying broadly neutral at £77m, as the Company did not make any redundancies during the period and continued to pay employees in full during store closures. Other key cost drivers include £1.8m of charges, related to the early termination of three leases on stores that were closed permanently; flexible financial and development terms offered to licensees for COVID-19-related store closures, including the waiving royalty payments and; a further £10.4m of impairment charges against 35 underperforming stores.

During the period, Starbucks UK accelerated its efforts to adapt its business model such that its offering meets the needs of the post-COVID consumer. The business has invested heavily to support the delivery platforms such as Uber Eats, Just Eat and on-the-go formats. At the end of the financial year 2020, 231 stores were a part of the Starbucks® Delivers initiative and active on the Uber Eats platform across various cities in the UK. The mobile order and pay (MOP) model has also been beneficial since the easing of lockdown, to support takeaway offerings, accounting for 6% of total sales during the period. Drive-Thru stores have been introduced across the country, with 200 stores trading at the end of FY20 (of which 87% were licenced).

Starbucks UK also continued to evolve its store portfolio and review its locations and rental agreements, accelerated by COVID-19. The Company has been in discussions with its landlords following the pandemic to seek rent concessions where trade has been impacted and to regear leases where property values have fallen. While no concessions have been reflected during this period, negotiations are expected in FY21 to utilise break clauses in its lease agreements where leases are no longer competitive.

The aggregated companies reported lower aggregated revenues, down by 32% to $168m (FY19: $245m), driven almost entirely by store closures as a result of COVID. Starbucks EMEA waived royalties due from licensees between 1 April and 30 June 2020 when stores were closed, directly reducing revenue by 25% compared with FY19.

The EMEA companies reported a lower profit on ordinary activities of $104m (FY19: $171m), the decrease due to aggregated operating losses of $77m (FY19: $4.7m). The operating losses were partly offset by lower costs from COVID-19-related closures. There was continued support for Starbucks Italy of $23.3m and ongoing payroll costs of $50m.

Despite the challenges of COVID-19, Starbucks EMEA has seen continued licensee store growth in the Middle East and Turkey, including the opening of 167 new stores (net of closures). The rapid roll-out of Drive-Thru boosted sales by 24% in the Middle East versus FY19. This performance however was offset by poorer performance in Europe, supressing revenues by 71%.

At the date of filing, Starbucks is continuing to assess and respond to government mandated rules on social distancing and operational practicing, navigating local and national lockdown rules in the UK and EMEA. The region continues to be supported by Starbucks Corporation, given the strategic importance of the UK market to trial new initiatives in coffee, food service and point of sale. The business expects a continued shift of consumer behaviour which will drive further evolution of its stores, locations and offerings in the future.

Since 1971, Starbucks Coffee Company has been committed to ethically sourcing and roasting high-quality arabica coffee. Today, with over 32,000 stores around the globe, the company is the premier roaster and retailer of specialty coffee in the world. Through our unwavering commitment to excellence and our guiding principles, we bring the unique Starbucks Experience to life for every customer through every cup. Starbucks EMEA headquarters have been in the UK since 2015, servicing the Europe, Middle East and Africa and driving Starbucks growth strategy in the region. Starbucks opened its first stores in Europe in 1998 and has since grown to 3,600+ stores across more than 40 countries, with the UK remaining as the largest market. 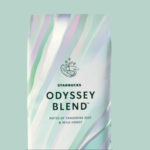 Since successfully launching the Starbucks Circular Cup, a reusable cup made in the UK from approximately six single-use paper cups, Starbucks is now scaling up the programme, from 20,000 to 75,000 cups, to launch across its stores in Europe, the Middle East, and Africa as part of its reusables expansion. Locally produced in Cornwall, southwest […]