Sustainability has been at our core since the beginning, back when Starbucks began in 1971. Over the years, with the help of our partners, customers, industry experts and advocates, we’ve looked for ways to help protect our planet, including introducing a cup sleeve made from recycled content, ethically sourcing 99% of our coffee, co-developing the LEED for Retail program, investments in renewable energy, championing the creation of a recyclable and compostable paper to-go cup and more. We recently announced a new sustainability commitment to be resource positive, including preliminary goals of reducing carbon, water and waste 50 percent by 2030.

To learn more, read on for an at-a-glance look at Starbucks sustainability milestones:

Unveils Starbucks Mission Statement: “To establish Starbucks as the premier purveyor of the finest coffee in the world while maintaining our uncompromising principles as we grow.”

Rolls out Grounds for Your Garden program in U.S. and Canada.

Establishes a relationship with the nonprofit Environmental Defense Fund to explore ways to reduce the environmental impact of its cups.

Develops a cup sleeve made from recycled content to help eliminate the practice of double-cupping.

Establishes The Starbucks Foundation, whose mission is to strengthen communities around the world by creating opportunities for populations that face barriers, advancing sustainability initiatives and promoting civic engagement.

Partners with the U.S. Green Building Council (USGBC) to develop the LEED for Retail program.

Opens first Farmer Support Center opens in Costa Rica. Since then, eight other centers have opened around the world to support coffee farmers with climate change adaptation and mitigation strategies.

Commits $20 million to a variety of farmer loan funds, providing coffee farmers access to capital to cover expenses during the growing and harvesting cycles and make strategic investments in their farms.

Partners with Conservation International to launch climate change campaign and five-year global commitment to support farming communities and encourage the protection of their land, water and forests.

Opens its first store made from reclaimed end-of-life shipping containers. Starbucks would go on to open more than 45 of these modular stores in the United States, and more around the world.

Offers a $1 reusable cup in the U.S. and Canada, and a £1 cup in the United Kingdom to help reduce cup waste.

Opens 500th LEED®-certified store, more than any other retailer in the world.

Is a founding partner with Conservation International and other industry leaders to launch the Sustainable Coffee Challenge, an effort to make coffee the world’s first sustainable agricultural product.

Launches One Tree for Every Bag program, which provides more than 25 million rust-resistant coffee trees to farmers whose farms are affected by coffee rust.

Purchases enough renewable energy to power 100% of its company-operated stores in the U.S., Canada and UK.

Announces additional commitment of $30 million as part of its Global Farmer Fund program, which supports coffee farmers in improving the infrastructure on their farms and replacing older coffee trees with new ones.

Completes global rollout of new cup sleeves, which are made from less paper and more post-consumer fiber.

Issues its first Sustainability Bond in the United States.

Reaches milestone of 1,000 LEED-certified stores in 20 countries, including the historic Starbucks Roastery in Seattle.

Partners with Feeding America to launch its FoodShare food donation program with a goal to rescue 100 percent of food available to donate from U.S. stores by the end of 2020.

Issues its second Sustainability Bond, this time in Japan.

Eliminates straws in all Starbucks stores in Korea through strawless lids and paper straw alternatives.

Co-founds the NextGen Consortium in partnership with Closed Loop Partners to address recycling infrastructure and launch the NextGen Cup Challenge to develop a widely recyclable and compostable fiber to-go cup.

Announces strategy to positively impact 250,000 women and girls in coffee, tea and cocoa communities by 2025.

Operates over 1600 LEED-certified stores in 20 countries.

Launches FoodShare program in Canada, committing to rescue 100 percent of food available for donation from its more than 1,100 company-owned stores. Starbucks Canada is actively working to expand the program to even more cities and provinces, with a goal to have a national solution in place by 2021.

The Shanghai Roastery sets a new benchmark in green retail as the first in mainland China’s food retail industry to be certified LEED Platinum.

Introduces improved strawless lid made with 9 percent less plastic in several markets in the U.S. and Canada with plans for a full roll out by the end of 2020.

Reaches a milestone in the U.S. of rescuing enough eligible unsold food to provide more than 20 million meals to those in need, through the FoodShare program in partnership with Feeding America.

Invests in a wind farm in Illinois to power 360 stores, including the Chicago Roastery.

Launches The Cup Fund recycling program in the UK with environmental charity, Hubbub.

Introduces oatmilk, a non-dairy milk alternative, in the Midwest.

Starbucks markets across Asia begin the new year by phasing out plastic straws, including Japan, Indonesia and Thailand.

Announces new sustainability commitment to be resource positive, including preliminary goals of reducing carbon, water and waste 50 percent by 2030.

Launches Starbucks Digital Traceability Web Tool, which provides a way for customers to engage directly with their coffee and learn more about its journey, from bean to cup.

Rolls out strawless lids across company-operated and licensed stores in the U.S. and Canada

Joined the new Transform to Net Zero initiative as a founding member.

Announces Starbucks China will open its Coffee Innovation Park in summer 2022 incorporating advancements in sustainable manufacturing, smart supply chain innovation, and technology to support the aspiration to deliver the most energy- and water-efficient roasting operations for Starbucks in the world, while minimizing waste.

Confirms commitment to be resource positive company, including goals of reducing carbon, water and waste 50 percent by 2030.

Rolls out oatmilk in all U.S. stores.

Commits to Carbon Neutral Green Coffee and to conserve water usage in green coffee processing by 50%, both by 2030.

Starbucks pilots Borrow a Cup Program in Seattle, an initiative that provides customers an option to receive their beverage in a reusable cup for a small deposit and return at participating stores contactless return kiosk. 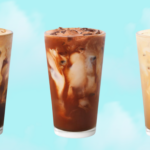