Globally, Starbucks continues to expand its Community Store footprint, with new stores in South Korea in 2020 and more than 100 stores in the U.S. by 2025

As part of Starbucks ongoing commitment to creating positive impact in the communities it serves, the store offers partners (employees) from the neighborhood a chance to uplift their community

Today, Starbucks celebrated the opening of its first Community Store in Indonesia, located in the Tanah Abang neighborhood of Jakarta. The largest textile market in Southeast Asia, Tanah Abang is also home to thousands of young people with limited access to education or career development opportunities. Starbucks will partner with two local NGOs, Yayasan Sahabat Anak and the Indonesian Street Children Organization (ISCO), to create further educational opportunities for youth in Tanah Abang.

“Starbucks is committed to using our scale and brand reputation as a force for good,” said Anthony Cottan, director, Starbucks Indonesia, at PT Sari Coffee Indonesia. “Since opening our first store in 2002, we’ve invested in creating long-term positive social impact across Indonesia, growing our community involvement alongside our businesses. With the opening of Tanah Abang Community Store, Starbucks will continue to nurture human connections alongside our partners, our customers, and the young people of Indonesia.”

“Indonesia has a longstanding and proud coffee heritage, which we’ve been incredibly fortunate to share with our customers around the world,” said Sara Trilling, senior vice president and president of Starbucks Asia Pacific. “One of the most important contributions Starbucks can make in return is serving as a catalyst for positive change in the communities we serve. Over the years, we’ve continued to expand the number of Community Stores in the region including Thailand, South Korea, and now Indonesia. We are proud of the commitment our partners have demonstrated, true to our Mission and Values, to bringing more people and more communities together over a cup of coffee through our Community Stores.”

CREATING IMPACT FOR CHILDREN THROUGH COMMUNITY

In addition to a full café, the four floors and more than 250 square meters of the Tanah Abang Community Store offer community space for workshops and classrooms, and showcase Starbucks Indonesia’s social impact initiatives. Nearly all of the Starbucks partners (employees) who work at the store have roots in the Tanah Abang area, making them a true representation of the community.

The store will share a portion of all sales with the two partnering NGOs, so customers will be able to help fund scholarships for local students and support regular educational programs in satellite classrooms across the neighborhood.

Established in 1997, Yayasan Sahabat Anak was founded to encourage and inspire Jakarta’s street children to escape urban poverty. With the support from the Community Store, the organization will be able to mentor students in kindergarten through elementary school through after-class activities in the store.

“We’ve partnered with Starbucks for more than 9 years to provide children in Indonesia with a brighter future,” said Dian Novita Elfrida, Chairman of Yayasan Sahabat Anak. “The Community Store and the active engagement of Starbucks partners and customers will generate many new opportunities for the children of Tanah Abang. We’re extremely proud to help realize a brighter future for the community and the children of Jakarta.”

The Community Store will also help the Indonesian Street Children Organization (ISCO) to provide academic scholarship for dozens of students aged 5-15. Established in 1999, ISCO runs programs to support street children who live in poverty to achieve their potential. Today, ISCO sponsors over 2,000 children across 30 communities in Indonesia.

“Unlocking the potential of the young people in Indonesia is a mission we’ve shared with Starbucks for more than 5 years,” said Josef Fuchs, founder of ISCO. “Starbucks has been very supportive so it felt like a natural step to once again collaborate more closely and create a more positive impact to our future generation.”

“The Community Store has already woven into the fabric of the neighborhood and we’re very excited to see the ways we can grow together to support children in Tanah Abang,” said Andrea Siahaan, senior general manager of public relations and communications, PT Sari Coffee Indonesia. “Since entering Indonesia in 2002, Starbucks has expanded to more than 430 stores in 32 cities, operated by more than 4,800 partners. Connecting with our customers through the lens of humanity has always been at the heart of our business, and we are excited to see the kind of positive impact we can make together with the community in Tanah Abang.” 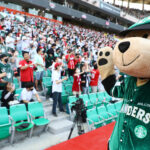